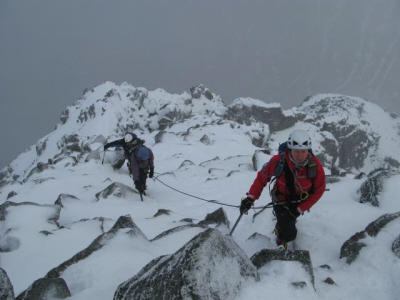 So there was Rob the mountain goat, temporary resident; Jane the permanent escapee from Bristol, Richard the dentist -later to become know as ‘The Gutter slayer’- and me, innocent abroad.

This rabble shared a Toblerone shaped chalet at Inchtree near the glamorous town of Fort William for a few days in the final week of January.

On day one the Grey Corries called to the Munroists, and ignoring the forecast of 70mph gusts and heavy rain, we all set out with great stoicism (an essential trait for anyone attempting anything in Scotland). Having conveniently forgotten to put my winter boots and axe in the van I traipsed over the heather with lightweight Gortex and proved just how good Meindl boots can be. In retaliation Scottish bog proved how boggy it can be, and as the ice sheets grew wider and wider, the neve proved how slippery it could be.

Mountain goat Rob and a temporary day visitor, Phillipa, waltzed up the steep snow slopes while the rest of us suffered. I proved just how good New Classic Binding crampons are when confronted with the predicted 70mph gusts on a knife-edge icy ridge (thanks Rob). It looked like the Alps up there at least I think it did, as it was nearly a white-out at times. Apparently we ‘did’ 2 Munros that day (And yes, it did rain). 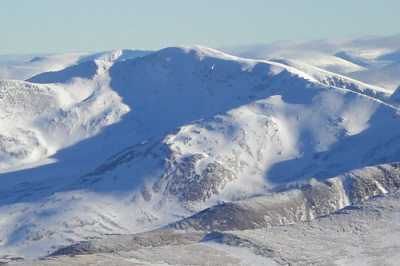 On day two Rob, Richard and I explored Glen Nevis, involving a test of nerve on the Steall wire bridge over a rushing river in the off-on rain. Rain stopped long enough to consider it a good idea to ‘go and look at’ The Gutter; a Diff route on a Polldubh crag that Rob declared climbable in crap weather. The walk up to it was so excruciating it drove Richard to volunteer to lead this unappealing seeping slab. He did it well, I did it badly (rigid boots and freezing rock aren’t my climbing strength), and Rob almost didn’t bother. We retired early before anyone got hurt. 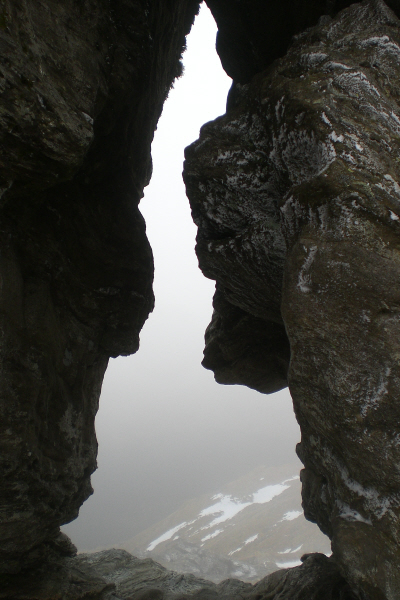 On day three Jane, Rob and I had a date with a guide – Andy Ravenhill. ‘Ledge Route’ on the north face of Ben Nevis was our ambition and Andy was there to route find in the permanent cloud and help brush up winter skills. Ben Nevis is a big big mountain that makes you feel very very small. The local expert made our ascent a breeze -perfect neve helped too- and we looked at snow profiles near thawed and frozen snow, and learnt how to move together over the ridges, ledges and slopes as a roped up three. Jane is perverse enough to want to ‘tick’ off Munro tops, so once we had reached the cloud covered summit we were dragged down and up and down and up more agonising slopes to reach a second summit. (I still don’t understand how a mountain can have two summits). It was a long challenging day but worthwhile in oh so many ways.

On day four we needed a rest so Rob, Jane and I chose to brush up our skiing skills at Aonach Mor. A perfect choice: no walk uphill – just get on a gondola – and the best weather for weeks: crystal clear skies with infinite views. But dropping temperatures had turned the pistes into the Cresta Run. I fell over a lot, Jane almost took on more than she wanted, and Rob looked cool. The best bit was the warm sunshine and views, and a close look at a climber finishing a gruelling gully climb on the west face. 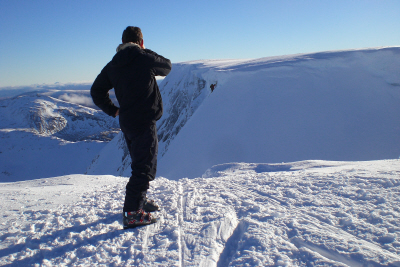 On Day five, on the way to Glasgow airport, Rob and I took on the small but perfect ‘Cobbler’ (aka Ben Arthur).  This Corbett is in the Arrochar Alps and has the most distinctive outline of any mountain in the Southern Highlands. A steep trudge ends up at a rugged rocky summit and there’s a short and ‘delightfully exposed’ scramble through the ‘needle’ (a hole) and up blocks to the top. It looked suspiciously icy to me so I took artistic photos instead. 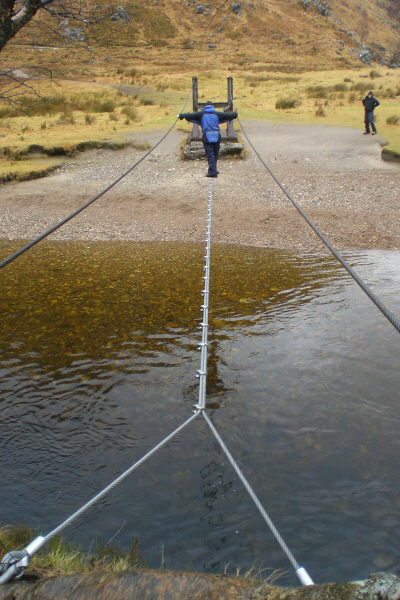 I left Rob to continue his work of ‘ragging the hills’ safe in the knowledge my legs didn’t want to see another slope for a while.