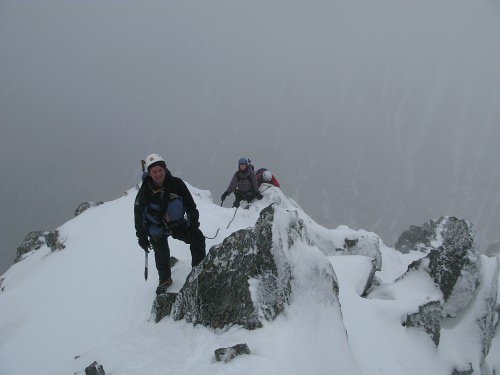 It’s 8 am on Saturday the 15th of January and I’m looking out of my window in the Tyndrum Lodge hotel at the near horizontal rain lashing down. Of all the days to start my 2011 winter Scotland trip, even a hard week on the Tay estuary had not conditioned me for this but that’s another story and your skin IS waterproof.An hour later and I am setting off for Beinn Chabhair at the top of Loch Lomond. Nobody else is though. I always think it good to start a trip with a bang because if you start giving up to early then it could set a defeatist trend. 2 hrs later as I literally crawled through a windy gap at 750mtrs I was not so sure. Anyway the wind let up a tad and the summit was duly obtained bar the slip on the way down which introduced me to my coccyx for the first time. Dr Nurofen could sort out the coccyx, and two cups of strong coffee in the Inverarnan hotel after tipping an inch of water from my boots sorted me out. As I steamed by the fire, the bemused looks of the happy folks enjoying beer and food said it all. Maybe they had got things right. 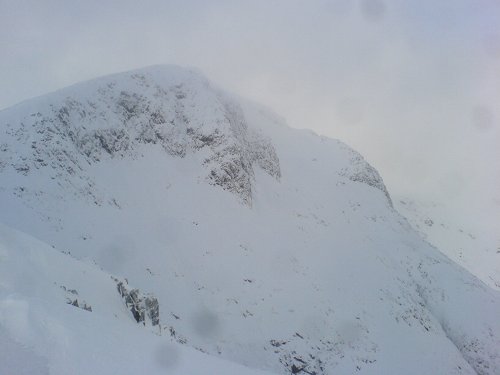 After days like that it couldn’t get much worse and I managed good a week climbing Ben Oss, Beinn Dubchraig, Beinn a’ Chochuill and Beinn Eunaich – often in whiteouts but steadily improving before a great day on Stob Ghabhar with its wonderful corrie and narrow connecting ridge requiring extreme care on the approach and traverse due to it being neve bound. Not a soul around which was a pity as it has fine winter routes, much of the action seems to be around the honeypots of the Fort William area.

Time for a change and what better than a days skiing? An hour and a half drive took me to Aviemore for a meet with Jane and Pete, two former AMC members now based in Scotland. The three golden rules to Scottish skiing are:

All the boxes were ticked and a great afternoon was had. The following day was grumpy and a return to the mountains was in order. Picking the North Glen Sheil ridge seemed a fair choice and the snowy ridges of Aonach Meadhoin, Sgurr a’ Bhealaich Dheirg Â and Saileag were completed, with the added bonus of a Golden Eagle sighting, but leaving Jane and myself a fair way from our starting point. My tactic of getting Jane to hitchhike while I hid in the nearest ditch was not necessary as the fourth car stopped anyway and fifteen minutes later we were in front of the fire in the Cluanie inn chatting to Dave Talbot, a Bristol climber who just happened to be in there. Small world?

A few days later and a few AMC members had joined me at the Inchtree centre and a really varied week was had by all including some Munro bagging, skiing and the Ben via Ledge route – See Sarah’s article for more on that. On their departure I was left with a few days so decided to go on a mini tour, bagging some hills in Glen Garry and then a social night in Aviemore (messy), and finally another crack at the dreaded Beinn Dearg. This mountain is a long way in, so I chose to mountain bike in. Thankfully the weather was kind enough to not produce the obligatory whiteout until I had summited and by the time I was cycling out it had disappeared in the gloom. The guy I had a brief chat with on the way back was still walking in, poor soul. He eyed my bike up in the way a gang of hoodies would eye up your iphone in a dark alley. I don’t blame him- forty five minutes of bliss on the way out. I love my bike.

I had already arranged to meet my mate Howard, a very fit 66 year old veteran of the Munros and countless other hills, back at the Inchree centre, so four days after leaving I was back. The target this time were Corbetts and Grahams, which were going to be challenging as the weather by now had turned truly awful – 100mph winds! It was a pleasant surprise to find Claire, Nigel and Ian from the small but excellent West Yorks MC there. Top people these and they had brought a barrel of beer to put behind the bar at the centre. I staggered up to my chalet in the early hours confident this handicap would just put me at the right pace for walking with my retired friend the next day. 8am came. Ouch. Howard is keen to go out despite the forecast and a couple of hours later the beer sweat is oozing out and my swearing is truly appalling as I break trail through knee deep snow to my first ‘Graham’. Nearly three hours to the summit: never underestimate the winter! The bad weather continued for several days so we continued to bag Grahams. If you revise your plans there is always something you can do. Many others at the centre just seemed to mourn the fact the winter routes were out but at least we were doing something. The week flew by and on my way back to Bristol I wound down with a couple of days in North Yorkshire. Love this place, where else can you get a bath in a cattle trough in February and have to run away from the angry looking farmer! 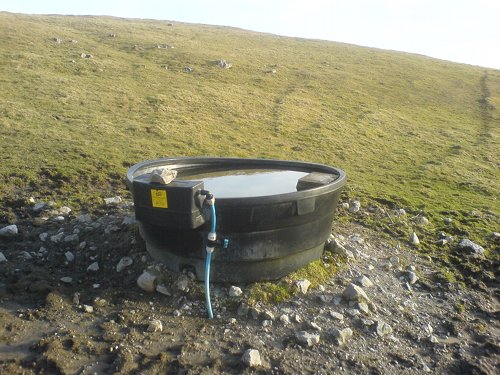 Luckily for me I had a ski trip to the Dolomites and I was pleased when my boss granted me another free week on my return (unpaid!). My washing was barely dry from Italy when I begun the long drive North a week later and by 9.30pm I was back in Tyndrum. The following morning I hastened up Beinn Achaladair only to have any further progress stopped by the most awful visibility. Some days you just can’t be bothered with it, this was one of them. I left the area and headed north to meet Jane and Fraser and we plotted up to climb Beinn Fhada at the back of the North Kintail ridge. 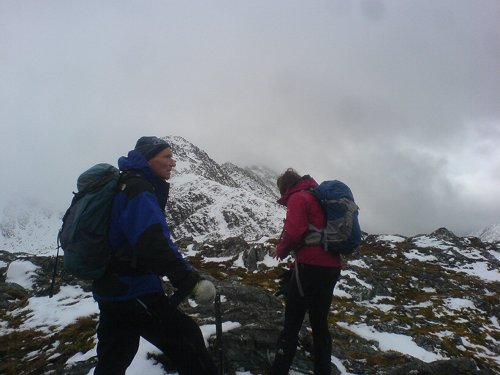 This fine mountain was taken in by a series of exposed and rocky tops, great hill. Jane was quickly rebuffed from going out to one of the ‘tops’ due to fading daylight and some fine bum sliding sped up the decent. The beer tasted good in the Cluanie afterwards. Several days of high winds then followed before I travelled across to join up with Dave B and his merry band at the most glamorous hostel imaginable in Ballater (I still slept outside in my van due to several bad episodes of snoring!)

The first evening rapidly went downhill as the weather forecast denoted a foul day to come. Certain members of the party, who will remain nameless, resorted to alcohol and some high quality malt was seen to be taken nasally (Do not try this at home). I awoke late the following day with a sniffle and a low level walk was chosen as the winds were every bit as high as expected. Thankfully they dropped the following day and the very remote Carn an Fhidhleir was climbed along with its neighbour. Thank god for the bike again – 11 miles in this one and I also needed to strip to my boxers to ford a river (twice!). The other team had a fine day on Lochnagar and we finished the trip with a fine meal, which was all the better from the road kill we collected after its unfortunate escape from HRH estate at Balmoral(Cheers Charlie!)

The warm jet stream was in control as I headed back south, but I managed a couple of peaks in the Tyndrum area before decamping at Langdale and finishing the trip with old favourites Jacks Rake, Crinkle Crags and Bowfell. The Old Dungeon Gill remains as charming as ever: may it never change as I raised a glass to my trip.