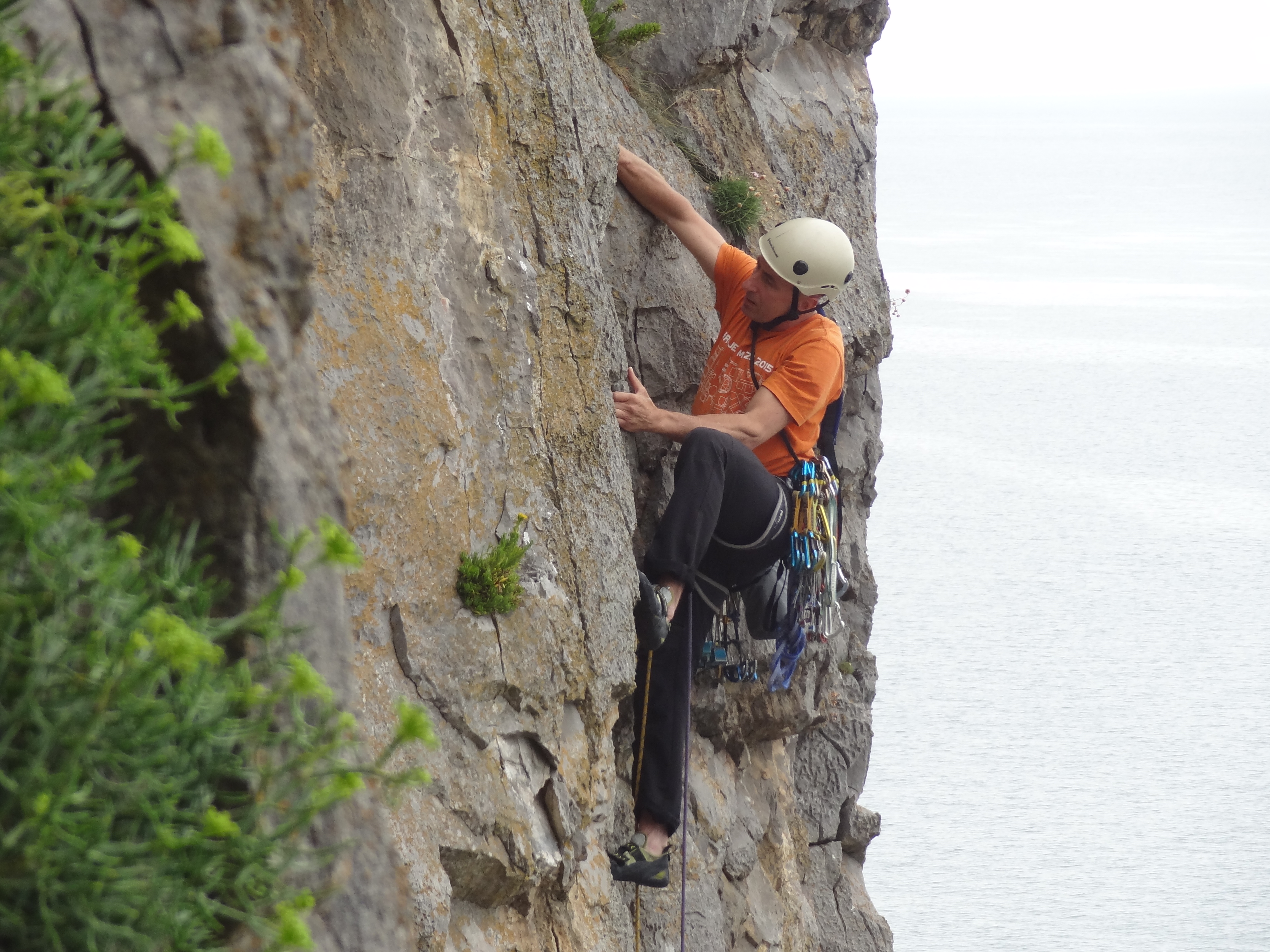 Words by Simon, photos by Louise

I’d had a pretty negative life experience of Gower; one abortive climbing trip, without guidebook, in such a distant past that the person I went with can’t remember it ever happened. That plus a family camping weekend in the rain in a packed, noisy campsite – sleeping in a makeshift flysheet as the in-laws had forgotten bits of their tent – had kept me away. So I was relieved when I finally managed to get to one of the AMC’s trips, well-known for conviviality and low stress.

It was Saturday morning before I made it to the best-in-class campsite that is Nicholaston Farm, friendly and helpful proprietor walking ahead of me to show me where the AMC’s last few teams were packing for the day. After a bit of nervous negotiation with people whose plans and determined expressions were set, I attached myself to Louise and Pete who were heading for non-tidal Lewes Castle.

It was perfect rock-climbing weather, really; warmish with a light cooling breeze, cloudy, choose one layer or two, shorts or longs. I led Gethsemane, a severe the others had done before and probably the only upper-tier route we were going to get done at our state of grade. But very enjoyable, easing towards the top, where I finally believed people about the fiddly belays and enjoyed the company of circling swifts. (After the trip, I found that the swifts nesting in coastal crannies is a rare thing and the ranger has asked for a limited ban, but “the BMC does not usually agree to bans for swifts.” So what are we to do? Anyway, too late and it wasn’t on our route).

The trio of Dez, Ali and Edd were well-established on the adjacent HVS (?), Dez leading in fine style and the others glad to be on the blunt end of the rope. We met on the top and on the way down passed Lotte seconding Glen on something HVS (maybe Isis?). At that point she did’t sound very glad to be on any end of the rope, blunt or otherwise.

It made sense to reconfigure into three pairs, and after a period of peering around, scrambling about and “shall-we-shan’t-we-abseil-in” I decreed the King Wall was now accessible on foot, my preferred method. So back through the gorse (shorts!) and down to the beach and round to the barnacle zone, which was getting taller by the minute. Edd narrowly avoided smashing his knee to pieces falling over on the newly-exposed wet foreshore, and we eventually found our way, via some barnacle-scraped shins, to a pleasant couple of severes and a really quite testing VS 5a called Balder. “Thin moves with thin cracks on a slab” was tempting and true, but with the slippery, sharp, actually-quite-steep-with-tiny-flared-cracks sort of slab. Good lead, Edd.

Back at camp in time for a swim, which I didn’t take because the perfect rock climbing weather was cool and grey by now and the beach less than tempting for most people. Instead, the slowly returning gang sampled the world’s best campsite showers and gathered around the barbecues, jetboils and firepit for some convivial gluttony. Lotte and Glen arrived and went again in search of evening sport routes, super keen, but by dark the throng were all gathered.

The morning was also too cool and grey to get me in the water but brightened quickly as the tide approached “really unhelpful,” so it was full on sun frazzle as a group of Alastair, Dave M, Edd, Dez and I headed out along to Boiler Slab. This was classic western approaches in the sun; meadows and hedgerows and shining sea with the odd kayak, and pretty much nobody else in sight. (In fact, the only other climbers I met on this trip, apart from AMCers, were a surf club from Bristol, driven onto the rocks by the not crashing sea, and some of those were AMC members past or present.)

As we neared the crag, Alastair’s foot disturbed a young adder who we paused to admire as it…er…snaked its way back into longer grass. That was a special moment, as it was a first sighting of the species for many of us. Nobody was in the mood to really push the boundaries this morning. The idyll was making me idle, the others were set for lunchtime departures. The Red Arrows flew over in stately formation, setting the tone; it was the Welsh Airshow in Swansea Bay, but we couldn’t see the exciting stuff.

A nice VDiff to warm up, with one testy leftward move but lots of cracks, some of which were not flared and so took plenty of gear. Between us we added a couple of pleasant severes with Column (my lead) and Dulfer (Edd’s) and the quality VS of Direct (Al), and that saw us through to the scheduled departure time for most. We took our leave of David and Jenka who were giving their daughter a taste of cragging by demonstrating how to climb the VDiff with a quarter as many runners as me, and went our various ways. Elsewhere, ultramarathon Mike had gone for a humongous run, Lottie and Lauren headed for relaxed multi-pitch fun at Great Tor, a trio of Anthony, Dave and friend went to Lewes Castle and various people went to sport venues near Rhossili. I’m sure there were others but I’m not clear what they got up to; check Facebook for piccies.

This I have learned about Gower. It has fabulous and spacious beaches. But many of them don’t have much parking, and are mostly accessible if you’re staying at one of the campsites. The big car parks fill up with day trippers, making unpleasantly busy sections of beach. So I never got my dip, despite the frazzling sun, nor even an ice cream. Ah well, the life experiences were well into the positive now and I will be back.

The butterflies? Well, it’s partly a reference to the summer idyll, partly to a long-remembered snippet of Max Boyce:

To appreciate it I’m not sure if it’s better to be Welsh, or not Welsh, or 8 years old.