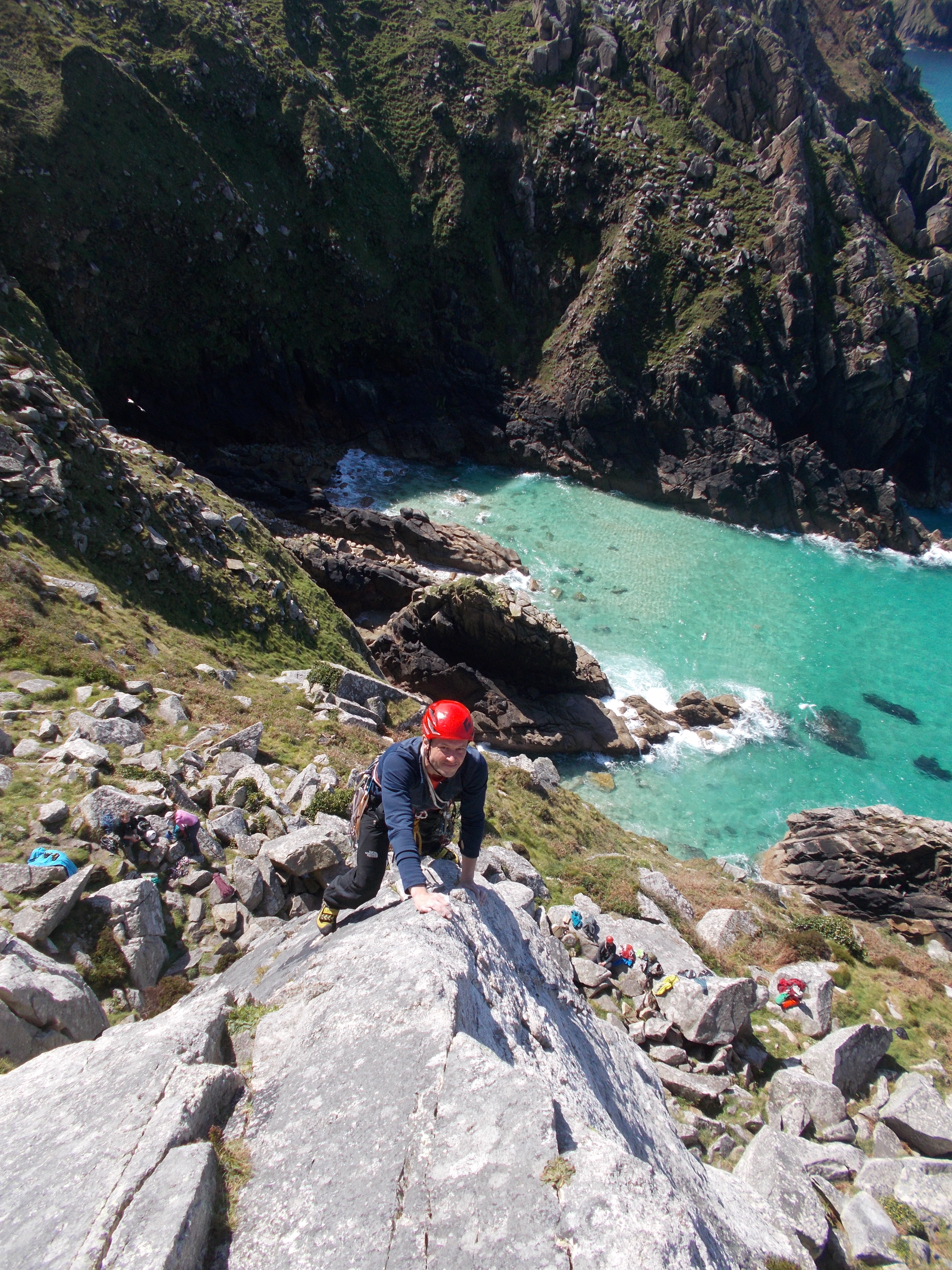 The Easter weekend meant that it was time for the annual AMC trip to St Buryan near the very tip of Cornwall. A strong contingent of 24 members made the trip South-West for what was the first camping trip of the year (too early according to some!) Fortunately we were blessed with good weather that allowed us to get out every day.
Friday morning started with plan making with the late arrivers and those who came down early enough on the Thursday to scout out the facilities at the local pub. After plans were made and pasties bought from the village, the majority of us set off to Sennen to enjoy the easy access to plenty of high quality single-pitch routes across a variety of grades, with some getting their first taste of Cornish granite. The weather threatened rain a few times but fortunately never followed through with anything more than a light drizzle and the real threat was from the pasty-stealing gulls! With some late arrivals joining us during the day, a good many number of routes were climbed and enjoyed by all. 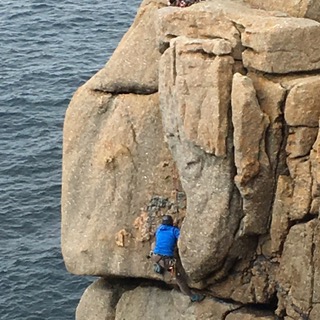 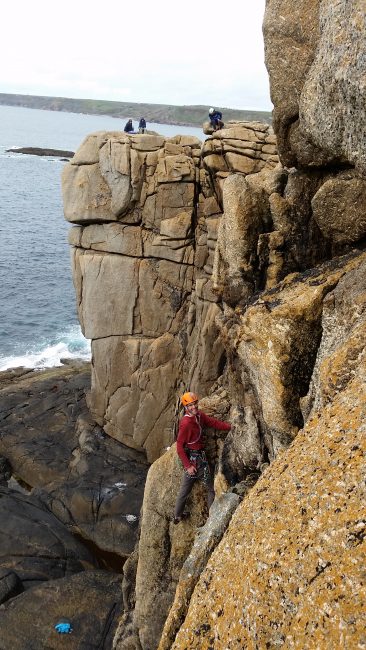 Mark enjoying the climbs at Sennen

Not everyone headed to Sennen. Lucy and James climbed a few miles up the coast at Kendijack and another group decided to try out what the local bouldering had to offer and set off for Pednevounder beach near Treen. While they did discover some worthwhile boulders they also made the discovery that it was not too cold for some to be fully enjoying the nudist beach!
Saturday was a bit of a damp start at the campsite as the club split into two groups. At Jonathan’s suggestion the majority went to Trewavas Head, a smaller crag the other side of Penzance with several easily accessed lower grade claims with great views across to Lizard Point. By the time we arrived the sun was shining and many climbs were enjoyed throughout the day (while trying not to disturb the rabbit hiding behind one of the rocks at the top) including a first trad lead and a top rope set up on the rather dramatic West Wing (E2) to finish the day. 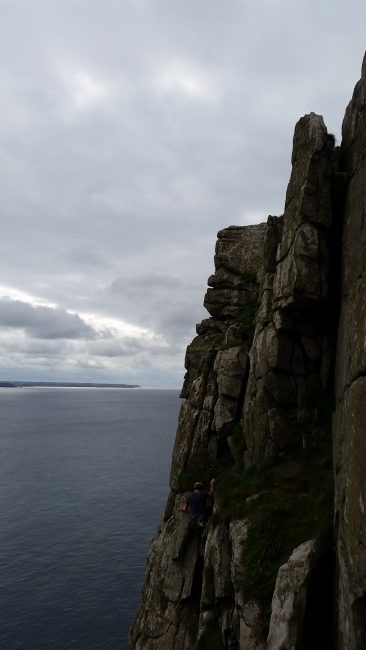 Dave climbing at Trewavas Head with Lizard Point in the background 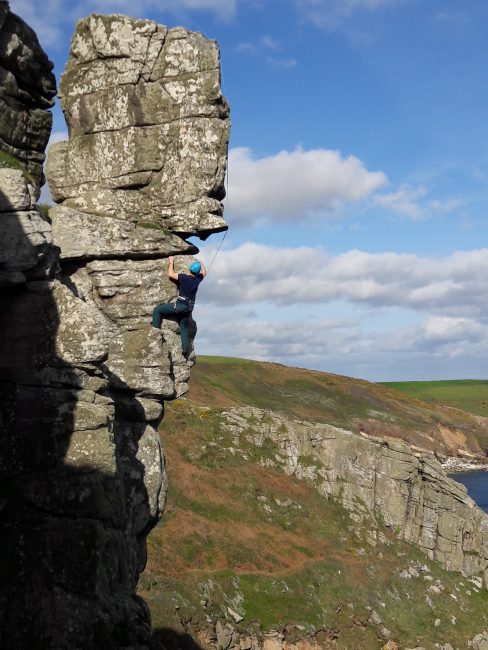 Alexi on the crux of the excellent Right Wing

Whilst the walkers enjoyed all the fantastic scenery the Coastal Path between Sennen and Treen has to offer, the other climbing group sought out more adventurous climbing and longer multi pitches and so spent the day at the classic South Coast crag Chair Ladder. The day ended back in the village with the 20 club members taking over half of the lounge in the local pub to enjoy a meal, much to the delight of the kitchen staff.
Easter Sunday offered some spectacular weather and the opportunity to climb in t shirts in the sun while looking out over clear blue sea. A group went to Bosigran, with some members experiencing multi-pitch climbing for the first time (and not being put off by my terrible route finding as they assured me). Several members enjoyed the classic Alison’s Rib and the shorter climbs around it. 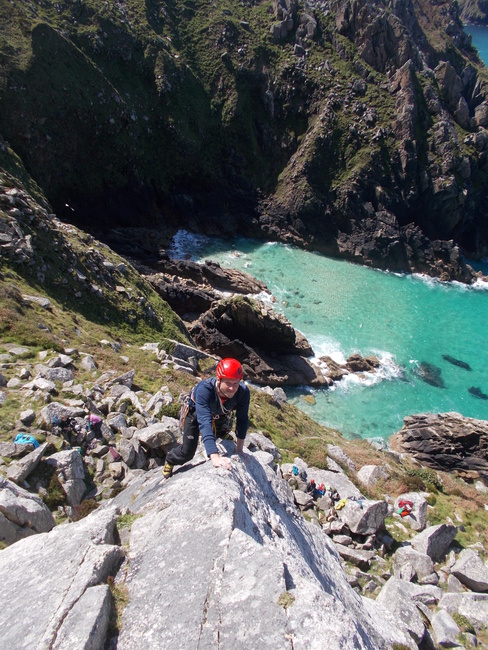 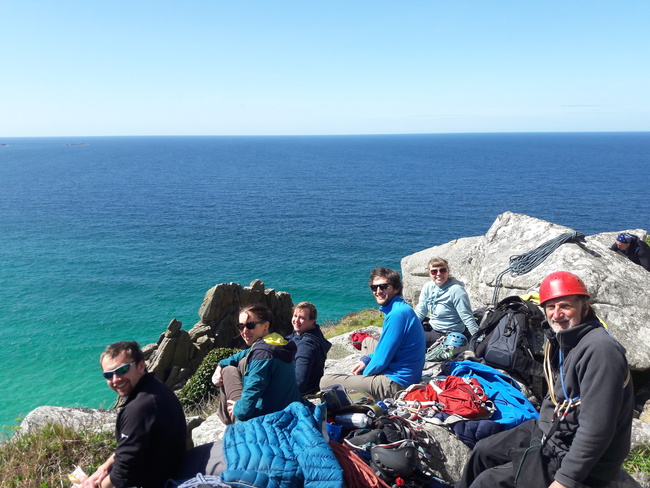 Basking in the sun at Bosigran

The second group had the idea of going to climb Land’s End Long Climb (VD), an eight pitch classic, but unfortunately so did several other climbers. With lengthy queues at the bottom and at every belay point, the group got as far as the third pitch before deciding to escape whilst they still could and went to find some less crowded rock to play on at Chair Ladder. 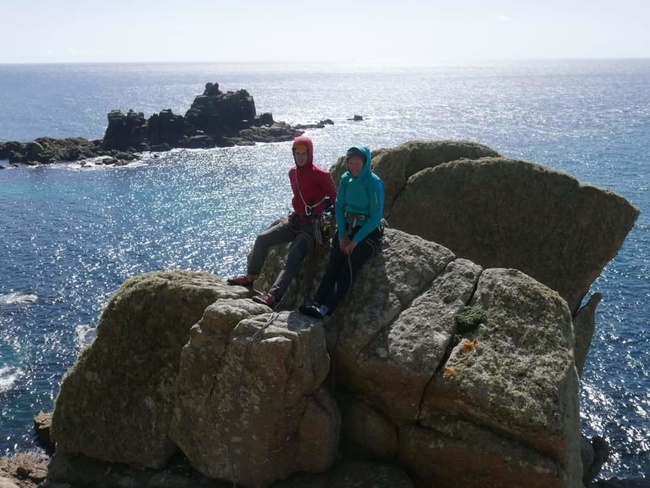 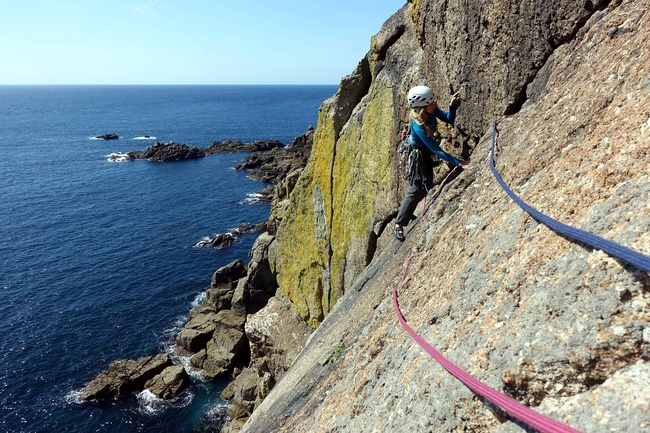 Laura on Pegasus at Chair Ladder

A number had to sadly leave us on the Sunday evening but enough of us stuck around for a good fourth day of climbing before making the journey back up the A30. We split up into small groups with some opting to get in some more single pitch climbs at Sennen before the drive home, while myself and Gary went to a lonely Gurnard’s Head to climb the fantastic Right Angle (HS) in a spectacular sea cliff setting.