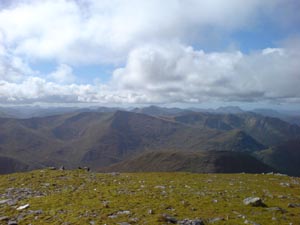 As I drove down the A9 towards Perth on a lovely sunny autumn evening I felt rather pleased about the trip that was now drawing to a close. I had been in Scotland for nearly two weeks and my time had been spent getting to know some of its more remote mountains.

Several years ago on one of my trips I based myself at a place called Cannich which is the gateway to Glen Affric, a national nature reserve of great beauty which lies about 25 miles southwest of Inverness. It was during this trip that I climbed many of the peaks in the glen except some of the more distant ones at its western end. I therefore decided that it was time to return and explore further! 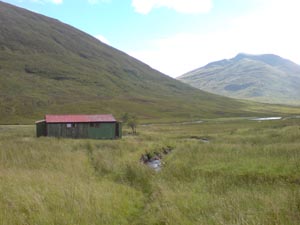 The two mountains I fancied on this trip were Sgurr nan Ceathreamhnan and Mullach na Dherigain,the latter occupying a very isolated position at the western end of Loch Mullardoch, itself nearly 10 miles in length. Even in summer it is not really feasible to climb the peaks without an overnight stay so I decided to book into arguably Scotland’s most remote hostel, Alltbeithe, but first I had to get there. There are several ways of doing this including the shortest route which comes from the Cluanie inn, but this is a often a treacherous route, knee deep in wet bog. The two options for me were the 9 mile hike from the end of the public road into Glen Affric or by boat! Ha, ha not as daft as it seems! During my previous trip I teamed up with some of the folks staying at the Hostel in Cannich and we went into the hills in a group. I am still friendly with one of the gang and it was he who told us of a remarkable Danish guy called Karl who lives in a cottage at the start of Loch Mullardoch. For some time Karl, who had to be 75 if he was a day had been running a boat taxi service so people could walk some of the ridges in one direction as round routes were virtually impossible. I remember getting in his boat with another 7 nervous looking passengers and being deposited at the foot of Beinn Fhionnlaidh. Thank god I was still a bit merry from the previous night!

The local shop in Cannich is a good source of information and as I left with my small bag of supplies and Karl’s phone number I was already looking forward to the lapping waves of the loch. Unfortunately there was no reply when I rang so I decided to drive up and see if he was around. On arrival I could see the place looked deserted and as I was about to leave an estate worker pulled up in his land rover and informed me that Karl was visiting relatives in Denmark and would not be back for a while. He also told me that a newly married couple had recently decided to spend their honeymoon at a bothy at the far end of the loch only for the bride to walk out the full 10 miles of shoreline the following day on an awful path leaving her husband on his own! That must have been some night! Undeterred, I decided to walk in the following day, Sunday the 2nd of September 2007 as the forecast for Monday was good.

It was reasonable day as I strolled towards the hostel but the tops were misty and I hoped this would clear for my ascent the following day. The summit of Ceathreamhnan is 1151 metres, the 22nd highest mountain in Scotland and like a lot of Affric, high ground meaning on a clear day due to its location a large amount of the surrounding mountains would be visible. The walk in is great in its own right and some people are happy to stroll around the pine forests and loch which itself is a fair outing. I reached the hostel by late afternoon and opened the door and walked in only to be told off by the warder for not taking my boots off! (old habits die hard) She was ok though and introduced herself as Miss Blair, an Australian with a Scottish grandfather who had now claimed the hostel as `her baby`.She offered me a brew and a bowl of soup and I settled in front of the wood burner. The hostel has water and electric which is provided by solar and wind power. It has a warm shower and cooking by gas along with room for around 20 people in a separate building with some of the beds in the main building. It is rarely full and really is a great experience to visit. There were another couple staying that night who were on a long distance route but that was it although Miss Blair informed me Monday night would be busy as she had four in including me! I retired to my bunk early and slept well that night. 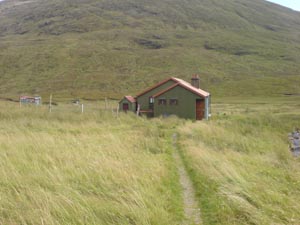 As I walked to the main building with my travel cafeteria the sky was clear and still and a good day was in prospect. I had a leisurely breakfast and got ready for the day, informing the warder of my route as I left. I quickly gained height on my way up to the point where the stalkers path meets the ridge. A quick bearing which must be accurate due to some nasty cliffs and a downward traverse to Loch Coire nan Dearcag across rocky ground at first and then a softer climb led me to the main ridge of Mullach na Dheiragain. It is a very long walk out to this remote peak and I really didn’t expect to see another soul but remembered that the estate worker I had spoken to told me some stalking was taking place nearby. Not long after I spotted a stalker among the rocks but well below me watching some beasts in the valley. I dropped down to make sure I was below the skyline and continued to the summit to be rewarded with wonderful views to Torridon and beyond. I retraced my steps to the point where I had joined the ridge only this time headed south west up the rocky spur of Sgurr nan Ceathreamhnan. This was a fine ridge and I imagined it in full winter conditions and have vowed to myself to return and take it on. On reaching the summit the views were among the best I had seen in Scotland, far reaching in all directions. I spent some time just relaxing and also scrambled along to the subsidiary top a short distance away, noticing a small figure on my descent route. Later on we bumped into each other and he turned out to be a trustee of the hostel and was heading up `his favourite` mountain. He had left his pushbike at the hostel and said he would see me later. It was a pleasant descent, with the tiny hostel getting a bit bigger with every step. I wondered what my roommates for the night would be like and also started planning a swim in the river to ease my aches and pains.

The river was its usual bloody freezing temperature but very therapeutic and as I walked back towards the building I could see three more shapes on the horizon. About one hour later three ladies arrived and introduced themselves to my self and Miss Blair who was surprised I was back so early, I told her I always eat my greens .The ladies were recreating a walk they did thirty years ago in their teens and had come in on the Cluanie path. They were plastered in mud so I was rather pleased with my route choice. They wandered off to the separate building where I was sleeping and about 10 minutes later one of them returned.`Are you saying in the same room as us tonight` she said? `Yes` I replied `am I going to be alright`? It certainly broke the ice! 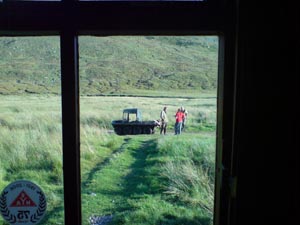 It turned out to be a good night as the ladies had brought lots of super food with them and I was treated to smoke salmon, cheese and chocolate! Miss Blair was also running an unofficial bar and was selling wine by the glass for a quid and single malt for the same price. It has to be the cheapest bar in Scotland but keep shush! The trustee also returned and turned out to be a really nice guy who lived locally and came up on a regular basis. Later on I took everyone outside and demonstrated that I don’t know much about the stars but on an incredibly clear night we saw them all and a good amount of satellites. They were surprised at the clarity of sky as they all live in the Glasgow area.

The following morning I said my goodbyes and set about the long walk out, carrying all the rubbish from my stay as is the house rule. Miss Blair stays at the Hostel for weeks at a time and lives on a curious mix of food due to the lack of a fridge which explains why when two stalkers had called in the previous evening she asked them for the fresh liver from the beasts they had shot so as to keep her iron levels up. I admired her guts for living out there alone on many evenings, and apologise for referring to her as Miss Blair but cannot remember her name, getting older you see!

Ps. I have been told the building I stayed in is left open in winter in case of emergency but Martin Moran did not find this the case when he arrived with a group one winter as reported in his book Scotland’s Winter Mountains. It usually opens from April to Oct.