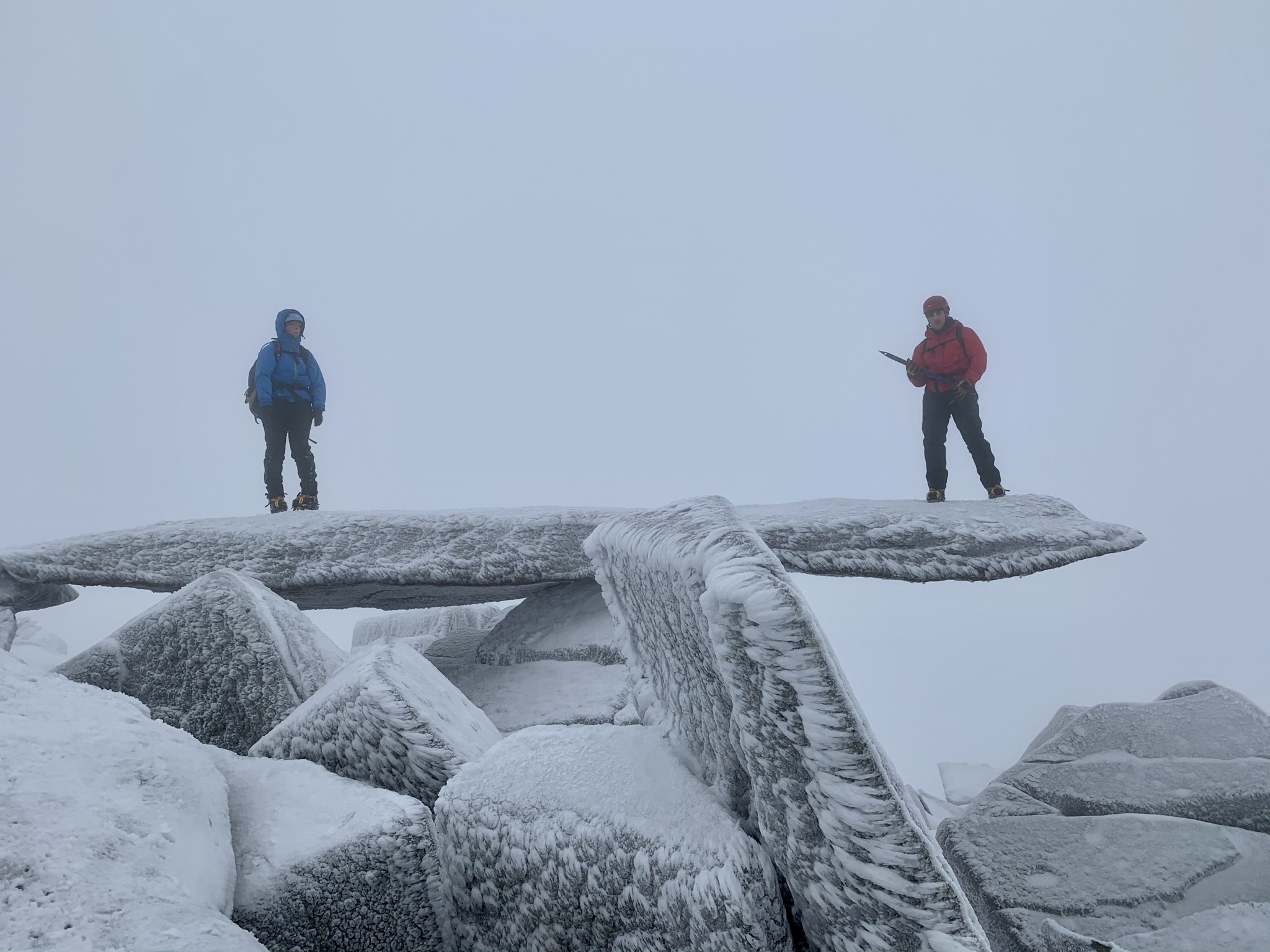 Given that this weekend was the first post the latest lockdown it was always my intention to get out and about in the hills. After seeing some snowy photos of Plas-Y-Brenin instructors on Crib Lem Spur on Wednesday I hatched a plan to go up to the Glyders with two friends. Having not done Tryfan or Bristly Ridge since I was a child it seemed the perfect opportunity to refresh my memory and get the winter kit out of storage!

We set off at 6am and got to the car park at the base of Tryfan around 9am. On the drive over we had great views of a snow covered Tryfan which was very exciting, although it did cloud over as the day went on.

It wasn’t long until we started finding some snow underfoot and as it started to get deeper and icier we decided it was time to stop at kit up – goal 1 achieved – crampons used!

After a few wrong turns and a couple of sketchy moves we made it to the top and had the obligatory photo by the Adam and Eve stones. Sadly the icy conditions prevented us from getting on top and hopping between them.

After a quick time check we headed on towards Bwlch Tryfan and the start of Bristly Ridge. By now we were well in the cloud and I was a little concerned about finding the start up Sinister Gully but as it happened we followed the footprints and soon found the small wall at the base of the gully.

We made rapid progress up the gully and soon got to icier and steeper ground at the gully exit. After a tricky move out the top we headed onto the ridge proper and enjoyed some fantastic scrambling.

We soon found ourselves facing the pinnacles towards the end of the ridge and came across a few parties roped up. We had a rope and gear in our bags but hadn’t yet needed to get them out. After waiting for them to finish climbing the first pinnacle we had a look and were happy to continue as we were. The down climb to the great pinnacle gap was exposed and required careful moves. We now faced the final Great Pinnacle. There were three parties pitching their way up the pinnacle so we decided to keep moving and stick to the scrambling route that skirted around the side. After a few final scrambles we made it to the plateau of Glyder Fach and the cantilever.

My original plan had been to carry on and finish off down Y Gribin ridge but with poor vis and only a few hours until dark we stuck to the route we knew well and walked back down to Bwlch Tryfan and on down past Cwm Bochlwyd. We took the longer route home via Pen-y-Benglog to avoid the bog over Bochlwyd Buttress but made good time and surprisingly got down well before sunset.

All in all a very successful outing and the first true winter mountaineering that I’ve done in Wales. Hopefully we will get a few more trips like this over the winter.