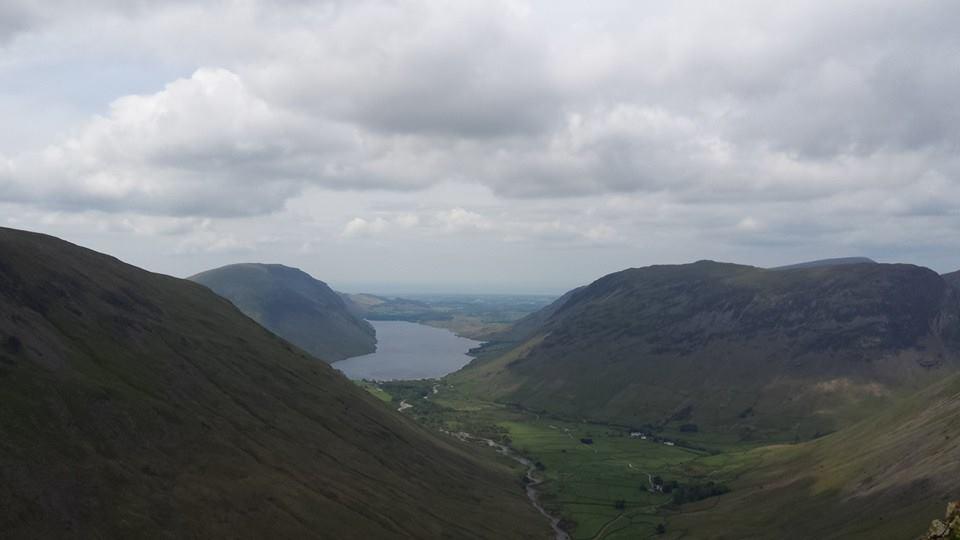 Facing unknown and unpredictable weather and traffic, 17 souls made their way up the crawling M5 and M6 to the beauty of the Northern Lakes. The numbers were raised to 19 by additions from the Scotland Branch of the AMC, and an unexpected, yet welcome arrival of a club member who just happened to be up there.

Members trickled in over the course of the evening, and the first night in the idyllic location of the campsite seemed to be an effort to prove TARDIS theories correct, by managing to get 11 people into Becky’s “Nessie” camper van! This was aided by a certain new member managing to squeeze his muscular frame in to the folded away roof compartment. It also included 5 ginger nuts in one big red box.

Saturday saw dispersal across the region, with the jangling of gear being heard in deployment to areas such as the Napes and Shepherds Crag. One group was convinced to start “Wainwright bagging”. Another crew headed up Scafell Pike and Great End. On this excursion, one inquisitive sheep decided that Dave Murphy’s hill food was far more interesting than the local flora, and tried to convince him to share. 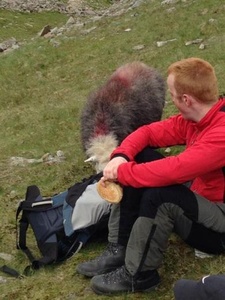 It had proven difficult to book tables for the group for dinner in one of the 2 local pubs for Saturday night, so a BBQ was had instead. Once again, a May club trip saw AMC members BBQing in hard shells and belay jackets. Although to be fair, the weather was less inclement than anticipated throughout the weekend, with plenty of t-shirts and sunglasses seen out and about. 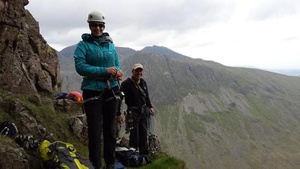 Sunday saw a mass assault on the beautiful Blencathra, via Sharp Edge, providing a decent first scramble for some. Good conditions kept the ridge dry, until the “we’ll just get that other top in” splinter group got there, and it started raining, adding an interesting perspective to the scramble. Typically though, the rain stopped once they had gained the summit!

Wanting to take advantage of different local opportunities, one member decided to go fishing. Well, I say fishing, but due to the unsuccessful nature of the outing, it was more like piscine harassment. 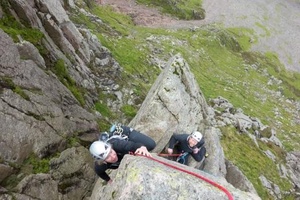 Another group took on the iconic Napes Needle, showing once and for all, that you really, really must be friendly with the lead climber, as the belay point on the top is not exactly spacious. I believe the word cuddle may have been used?

Check out Al’s blog via the link to see some great shots of the day, and others.

Monday once again saw a scattering of members across the region prior to various departures. The sunny weather (MWIS was correct for the first time on the weekend!) encouraged more “Wainwright bagging” and climbing. One group apparently decided that the Lake District didn’t offer enough hiking and climbing opportunities and went “caving” instead! This may have happened unintentionally, just exploring an opportunity as it arose, but the jury is out.

Here are a few thoughts from a new member:

“After joining the Avon MC two weeks ago this was my first away trip with the club. Firstly I had no problem lift sharing and in fact had several offers from various members! After turning up at the campsite I found everyone to be really friendly and had no problem finding people willing to take me out for a climb even though I am a complete novice to outdoor climbing, having only really climbed indoors. Over the long weekend I followed a fantastic 3 pitch climb on ‘The Napes’ on the side of Great Gable, followed another great 6 pitch climb on ‘Gray Crag’ up to High Stile and on the last day hiked up Scafell Pike and an adjacent peak via the Corridor Route. Overall I had a fantastic weekend, I’ve now got the outdoor climbing bug, and I look forward to the next trip!”

True to form, the view that day from the summit of Scafell Pike was limited to say the least, although the champagne and beer drinking party on the summit provided unexpected atmosphere; although it did explain the cheers and applause that could be heard on the ascent and an interesting talking point amongst the other groups encountered on the way down! 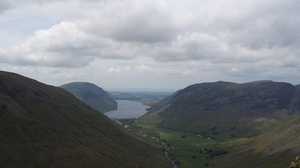 Altogether, a good trip, where several people achieved firsts for themselves, developed their skills (and in some cases learnt new ones) and expanded their outdoor activity repertoire. It was great to see new faces, and 4 members had it as their first club trip. We also discovered just how many varieties of a single colour one person can wear and own. Apparently “the future is bright, the future is orange”…