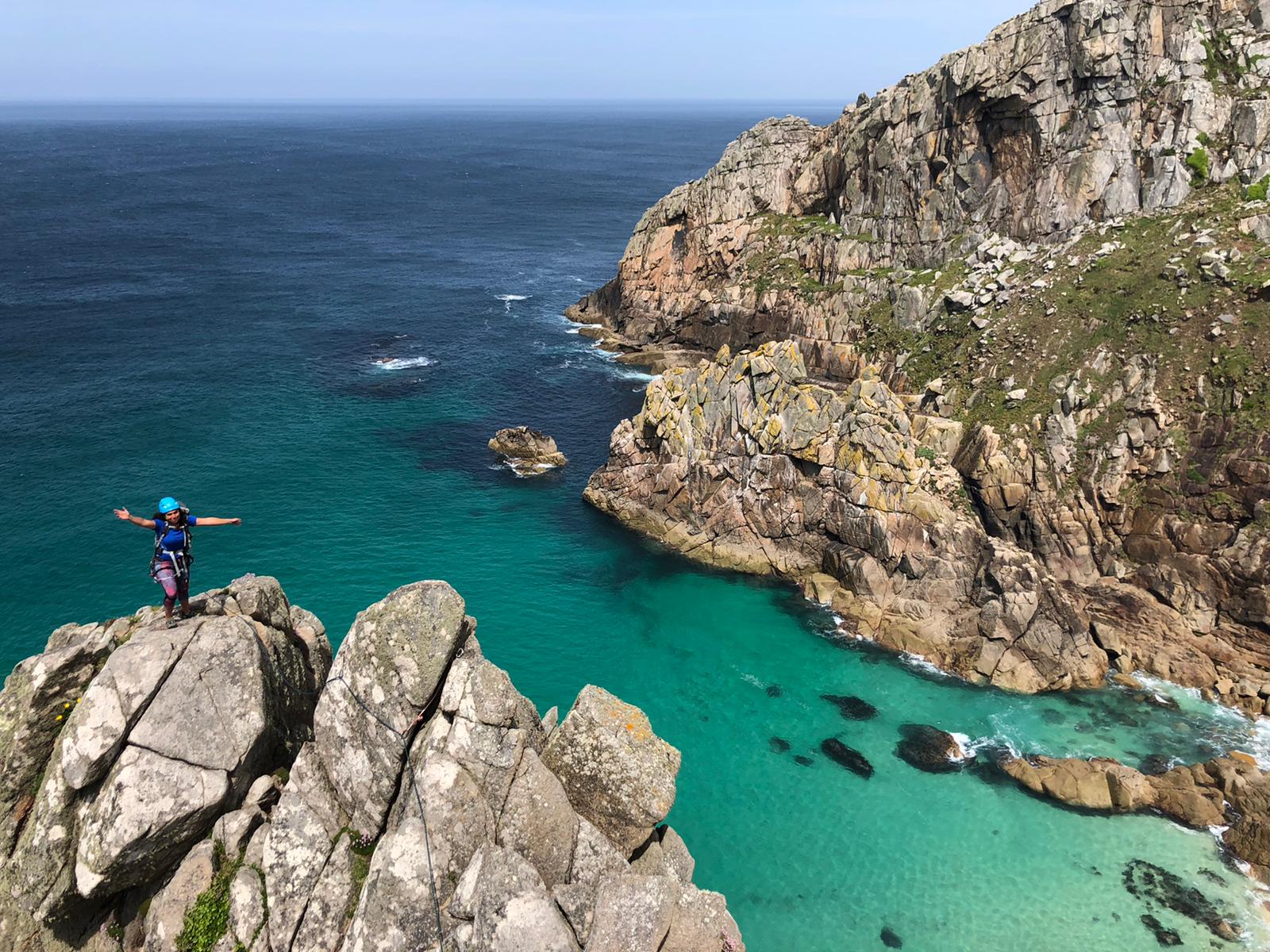 As the spring comes and with it the warmer weather, we get ready for the annual spring pilgrimage to Cornwall for Granite, Pasties and Cider.

To make the most of the weekend, I drove down on Friday morning with Steve Noble and headed straight to Bosigran with the Evil Eye (E5 6b) in my sights. We drop in by abseil to inspect the line, which looks like a goer, but its damp as that area takes a while to dry and is only usually ok in the afternoons.

After a large pasty break, we look to the adjacent route Patience (E3 5c) for a warm up, and oh what a warming up we got! May be it was the pasty weighing me down or I needed to tune into the granite better? I found it really hard going, all on good holds, but surprisingly sustained and off balance. Got to the top and had to have a sit down.

It was Steve N’s lead next and as it was his first time at the cliff, I recommended Thin Wall Special (E1 5b), which he dispatched with in good style. A few shaky moments on the bottom crux, but then a stellar effort on the top overhang that has a reputation for wild exposed moves, where he found new beta to reach the hidden jug with ease.

Meanwhile Matt and Kevser had also headed down and made short work of the famous Door Post (HS) with Matt giving a solid lead for Kev to enjoy as her first outdoor route.

By the time we finished Think Wall Special it was getting late and we still had the line set up by Evil Eye. I have to admit that after the experience on Patience, I was hesitant about going ground up on something 2 grades harder, so I decided to Top Rope it using the abseil rope. The overhanging crack start gets you going with hard 6b grunting moves on smooth granite, too thin a crack to jam, so all on the fingers. Above this it gets easier, but just doesn’t give you any chance to properly rest. At half height, the end of day conditions suddenly change and everything condenses leaving damp fingers on every hold. Just about managed to make it past the upper hard moves to top out as the sun sets.

We head back to camping at the Rugby club and meet up with Alastair, Khalid and James for take away and beers.

James and Steve N decide to head up and take on the cliff classic of Suicide Wall (E1 5c), with Steve starting up the Coal face and James taking on the traverse and crux, then Steve attacking the top offwidth crack.

Meanwhile myself and Matt do the adjacent route Beowulf (E2 5c), with myself starting us up the first pitch, and giving Matt the meaty second pitch, which he had a bit of an epic after missing a vital gear placement and climbing it with almost nothing. Matt belays mid pitch and we get to watch as Steve N (currently on the same ledge) once again finds easier crux beta, this time on Suicide Wall. I continue on up to the top, with the third pitch being short but very spicy climbing.

Alastair, Khalid and Kevser meanwhile find the joys of Little Brown Jug (VS), before moving on to Paragon (HVS) where the crack of the 3rd pitch proves too much for Alastair, spitting him out and they make the wise decision to finish up the Nameless.

With a super busy crag and it getting late in the day, Steve N then leads up the classic route of Anvil Chorus (VS) and I follow, before a rain shower stops play.

Another beautiful mornings weather, and Steve N and Kevser decide to go and adventure their way up Commando Ridge (VD), all 8 pitches and 160m of it.

Alastair and Khalid head to the far end of the crag and find the delights of Ding (VS) Ochre Slab Route 2 (S) and Rapture (VS). A solid effort and lots of mileage on perfect granite.

James and myself took on the mighty Bow Wall (E2 5b) with James leading up the first pitch in good style and myself following through for the second pitch. My 3rd time on the route, but the exposure and position are still as amazing as the first.

After a chat we had with another group of climbers the day before, we then took a look at Broadstairs (E2 5b), which is an unsung little route up near Autumn Flakes.

Meanwhile Steve N and Khalid followed up next to us on Autumn Flakes. Racing a suspicious rain cloud, Steve runs 2 pitches together and makes it to the belay without an inch of rope to spare. Khalid does a great job of leading the top pitch of the Nameless just as it gets wet, and they finish just as the rain sets in.