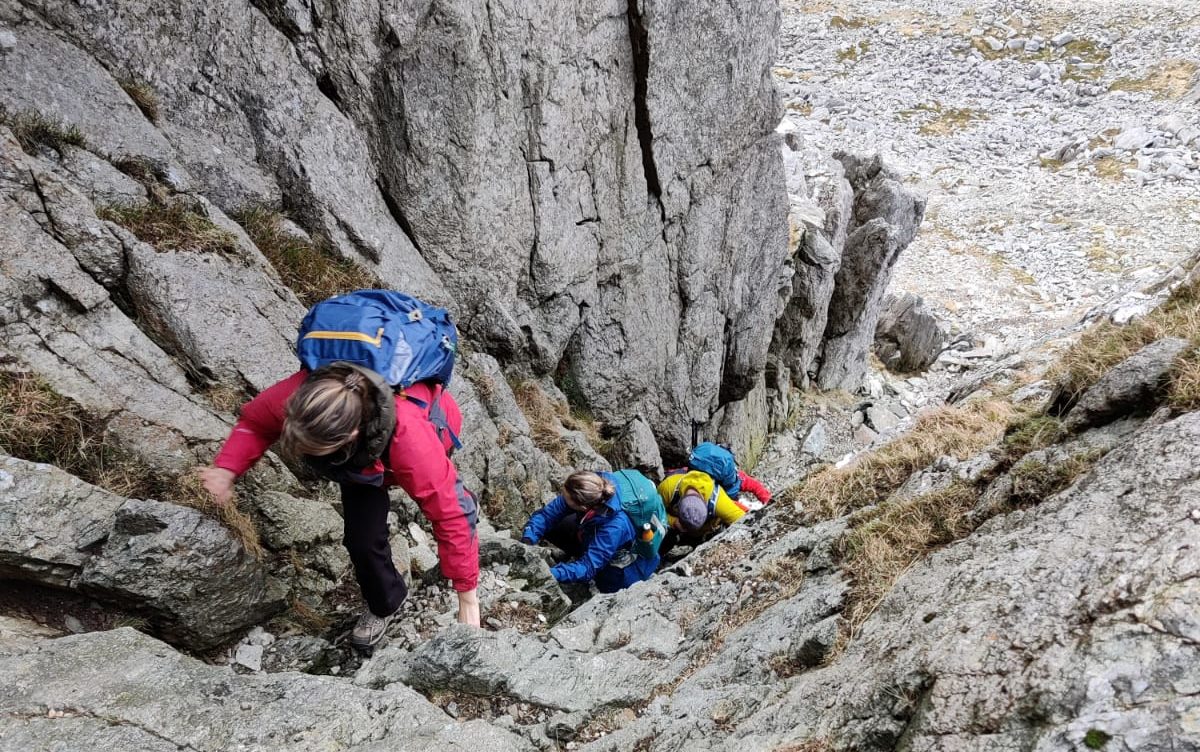 With lots of new club members along on this trip, it was a great opportunity to meet fresh faces and share what the club has to offer. A group of nine of us travelled up to spend the weekend exploring the mountains of North Wales, based out of bunkhouse accommodation at Plas Y Brenin. Kevser describes below our first day’s outing:

This was my first trip as a mountaineer. I was very excited to meet other people. The bunkhouse had a very good kitchen with all the equipment inside, and all the rooms are very warm and clean. I really liked where we stayed. In the morning, Rich and Lauren joined. I met them for the first time and they were all friendly. We all decided to go easy and do some Grade 1 scrambling on Tryfan. We started around half nine and the view was amazing. I found the first bit of the walk easy even through other people were faster than me. But then I started to run out of breath!

I think around two hours later we came to a point of a lot of really huge rocks. I never did scrambling before and this seems impossible for me.  I was ready to turn back but Charlie said I can do it and he gave me encouragement and some sweets:) This picture is example of rocks we climb.

Around two other hours later we are on top. Charlie and Jenny were very happy to see me on top. I was very happy to do something which I could not have imagined doing. At this point, my other group friends continued on and scrambled Bristly ridge, whilst I returned back to the car with Charlie. I look forward to next trip:)

After discussing the next day’s plans over a pint and an over-priced school dinner in the Plas Y Brenin bar, the group decided to split for the Sunday and take on two different objectives. The forecast was looking poor, as would be expected from January in North Wales, but the climbing contingent of the group were keen to get a roped adventure into the weekend. Rich, Ed, Lauren and Kai opted to explore the Dinorwic slate quarries by taking on ‘Snakes and Ladders’; a Russian roulette-rust fest of a via ferrata (loosely termed) that winds its way through the tunnels and tiers of the slate mine. The internationally renowned climber, ‘Alex_Handhold’, describes on UKC the following: “not for those without a decent head for heights or distrust of old rusty ladders…. It’s best not to look at what’s securing the chain to the top of the route, you don’t need that kind of negativity in your life… The ladders are rusty as shit and those things will fall to the ground one day in the not too distant future. The good news is that most of them have been loosely secured with some old dyneema. Best not to question the age of the rope, or what anchors it to the rock”. Fun was had, and all members returned safely to tell the tale.

In the meantime, Simon, James, Kevser, Jenny and I headed south west of the Snowdon massif to explore the Nantlle ridge, which we had heard boasted stunning views and enjoyable walking, interspersed with some easy sections of scrambling. We left a car at each end of the route, with the intention of doing a 13mi point-to-point walk. 400m up the first muddy ascent, the view through the horizontal mizzle was not living up to the hype, but I promise we were all having fun? James’ feet were ‘comfy but soaked’ having gone for the fast and light approach of wearing trail shoes, and my new waterproof gloves had done a great job of keeping all the water in. Our perseverance paid off around midday when the cloud finally started to clear. By mid-afternoon, we were all having a great time; Simon, James and I marvelled in endless views along the ridge, whilst Kev and Jenny tucked into a full roast dinner having cut the walk short, as pre-arranged, and gone to the pub.

As can always be expected, the adventure did not end until we got back to the car. James’ shoes dried out just in time to be submerged again in a soggy field of cow manure on the descent from the last peak. The final path off the hill landed the walking party in a precarious position within a disused quarry; the 20m crumbling drop disagreeing with the map which showed a public right of way. Some careful route finding and jump-turns down scree slopes later, we emerged on the road and returned to the car.

Successful weekend had by all, thanks to all the crew for coming along and making it a fun trip!