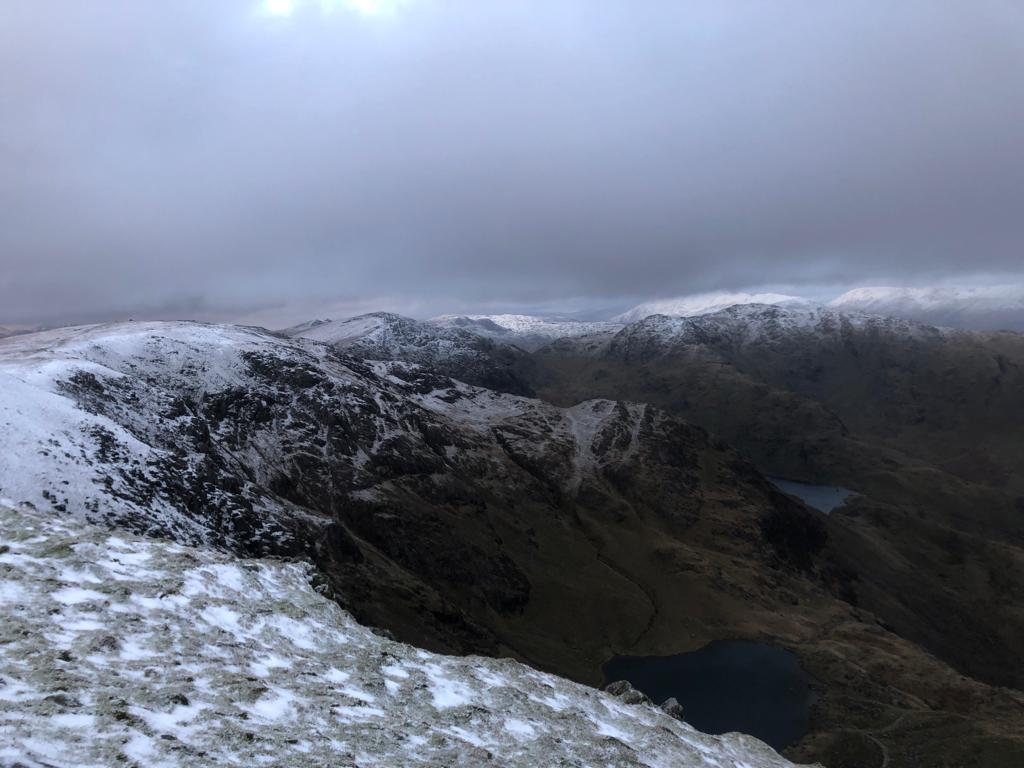 To kick off February to an adventurous start, a group of 9 of us planned a trip to explore the Cumbrian mountains, basing ourselves at the YMC hut nestled in the Copper Mines Valley in Coniston.

On Friday morning, me and Grace were lucky enough to be able to set off from Bristol bright and early to make the most of the ‘best weather day’. We managed to make it to the Lakes a little after lunch, giving us just enough time for a scramble and a summit!

Starting just outside Coniston, our route took us up to Goat’s Water, where we were greeted with the first winds of the weekend. Despite the winds, we had a fun scramble up Goat’s Crag to reach the snow-capped Old Man of Coniston just in time for the clouds to catch us up. But after a moment, the clouds parted slightly and we were rewarded with a stunning view of Coniston lake and the snowy mountains behind us, lit up by the last of the golden rays. The icy stones we were sitting on soon got us moving again and we descended as the darkness did, getting battered by the occasional hail storm as we picked our way down past the old mines and stomped back across the fields to the car.

We reached the hut at exactly the same time as the next car load (Simon, Lauren and James). Having discovered there was 0 wifi or signal, we were relieved to know they had found it ok – the drive up the lane to the hut was a little disconcerting in the dark! Jake and Lizzie arrived an hour or so later, with Charlie and Morgan making up the last of our Lakes team.

After pouring over guidebooks and maps and trying our hardest to understand Lizzie and Jake’s bird-collecting card game, we headed to our rooms to prepare for the weekend of wild and windy weather…

And the forecast did not let us down.

Saturday we arose to gail force winds and hail. We readied ourselves and set off in the cars in three teams:

Simon, Lauren and Lizzie planned to stick relatively low with a walking loop around Pavey Ark. Here’s Simon’s report from the day – With a forecast of difficult conditions on the highest peaks, we thought it might be wise to plan a route that took in some nubbly tops but stayed below about 500 m, sharing a start with the Pavey Arkers and breaking off east. In the event, by the time we got to Stickle Tarn the horizontal sleet sent us scurrying round a much shorter loop and back down to the Stickle Barn for cake, coffee and cider. We stopped briefly in Coniston to buy essentials for an evening in the hut – beer and long johns – and headed back to get the fire started and first use of the showers.

Grace went on an immense 14 mile hike to Little Langdale with her family who were visiting the Lakes the same weekend.

Me, Charlie, James, Morgan and Jake aimed to tackle Jake/Jack’s Rake (the guidebooks couldn’t seem to make their minds up).

After parking up, getting a little lost at the start and bumping into the other team on the footpath leading up to Stickle Tarn, we continued on to the base of JJ’s Rake (tackling a couple of tricky river crossings to get there). The combination of barely being able to look up at the route due to the stinging hail, the copious amounts of water running off the end of it and the exposed upper section, we made the sensible decision to back off and make our way up to the summit of Pavey Ark via the footpath instead. Though this certainly wasn’t the unadventurous option! The footpath was more of a river, which turned to slushy ice and snow as we neared the summit. Goggles were grabbed out of bags when we paused behind a rock for shelter. Most of us agreed later that that was some of the most extreme weather we’d experienced in the mountains – the winds literally knocked us off our feet and I was left crawling to the next peak of Harrison Stickle. We swiftly (made even swifter with the wind) descended down Dungeon’s Ghyll, passing some epic waterfalls on our way down. After more muddy slips on my part, we finally made it back to eat our lunch under a bus shelter.

The day had been brief, but big! At the pub we were so sodden that hot chocolates were favoured over pints.

But returning to the hut, we were faced with an even greater challenge…a 1000 piece, 1940s shopping basket puzzle. Lauren had admirably taken on the task solo, but the rest of the team soon swooped in to support her endeavours. Fortunately, our efforts were fueled by delicious fajitas and homemade apple cobbler and custard, pushing us on to complete the whole puzzle (bar two pieces) by the end of the evening. We retired to our bunks feeling exhausted, but content with the achievements from the day.

The final day started with surprisingly little rain…it looked almost nice outside (ignoring the howling gusts). Unfortunately our kit hadn’t been able to dry overnight so most of us started the day off soggy anyway.

After a scrub down of the hut, we broke into teams once more.

Lizzie and Jake headed straight back to Bristol (after a week in the Lakes they’d had their mountain fix).

Simon’s report of his Sunday stroll with Lauren – Sunday’s even more apocalyptic forecast had me planning a short walk of an hour or so from the hut towards Weatherlam, to stretch the legs before driving south, but the weather was pretty benign and we freestyled across some pathless but nicely-textured ground before dropping back to the village and the hut about 3 hours later.

Me, Grace, Charlie, James and Morgan headed off down the miners track straight from the hut to seek out another scramble and summit.

The sun shined down on us as we began our scramble up Long Crag. It was an excellent route with lots of options ranging in difficulty – one I would definitely recommend and perfect for the windy conditions.

Once we hit the top of the scramble, we crossed the marshy plateau to meet the path up to Wetherlam. The winds were even stronger than the day previous, so we ducked below the top to layer up and get out the goggles before stumbling onwards to the summit like drunkard bambi’s.

Our time on the summit was brief, and we quickly ducked down into a valley to follow Red Dell Beck back to base. On the way down we had a breezy lunch stop and took a small tour of the old mines that lay in the valley – we even got out the head torches to venture into an old mine shaft! We couldn’t believe our luck as the heavens opened just as we reached the hut – a spectacular end to a spectacular trip.

Thanks to everyone for such a great weekend of adventure!