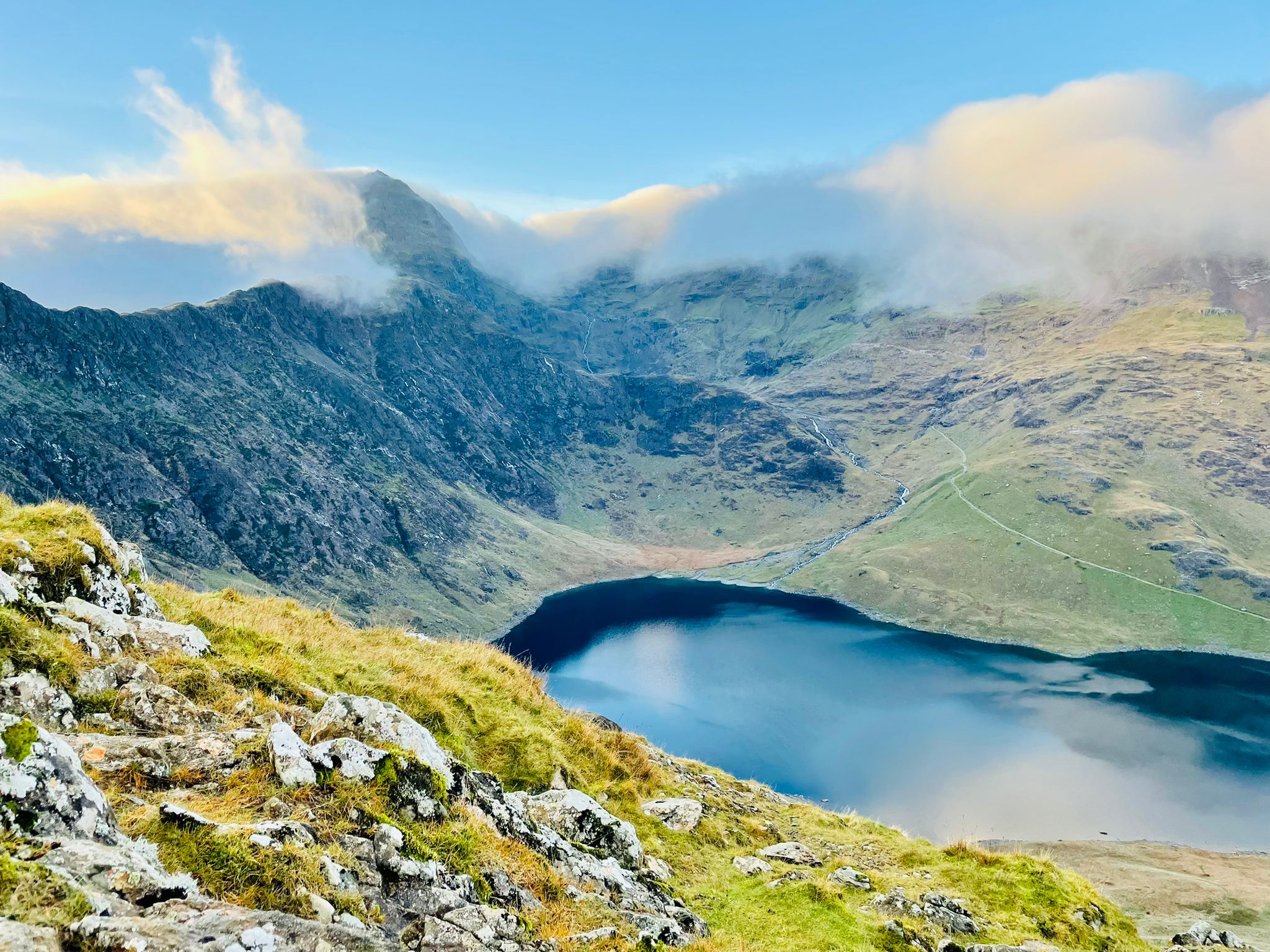 “I’m not feeling well”. That was when the climbing group on the recent Snowdonia trip realised the day might not be straightforward. The next thing they saw was Conor’s breakfast re-emerging. Why did he eat baked beans? Poor Conor was not having a good day. A mysterious something had laid him low and he spent most of the day kipping in Paul’s car. At least he managed to catch up on his sleep given his group had arrived at the bunkhouse in Bethesda at 1:30 in the morning!

Ah the bunkhouse. What image do you have in mind? A cosy wooden cabin with a roaring fire located in an attractive woodland glade? Afraid not. Caban-Cysgu, is a Victorian school house converted into an outdoor centre. Think barn like rooms, strip lighting, peeling paint and cold, cold cold. Oh, and it is in a suburb of Bethesda. Bethesda’s heyday, assuming it ever had one, was long long ago. The decline of the slate industry means it is now a highly deprived area and about as far away from Bristol as you can get and still be in Snowdonia! So first impressions were not good! On the upside, Jenny, who was later sharing her Tinder activity with us, don’t ask why, assured us that Bethesda had a great offering of eligible hunks!

However, as the team started to arrive things started to look up. Paul, rather grandly, had just flown in from somewhere exotic, he’s a Virgin pilot, and was busily preparing a veggie chilli for the group. This turned out to be excellent. The magic ingredient was chocolate apparently.

So the boys (and Jan) sat around in the kitchen, (too cold and barn like to go elsewhere) drinking beer and wine and getting to know each other and solving all the world’s problems.

While Friday was a washout the forecast for Saturday was good. Peter confidentially assured everyone the mist would lift by lunch time so the climbers decided to head for Dinas Mot while the walkers were going to do the Snowdon Horseshoe. Messaging with the missing party members, still somewhere on the M5, agreed a 7:30 set off so we could get into the Pen-y-Pas carpark. We retired for the night.

Come the morning we finally met Jenny, Maria and Conor and got cracking. Well, it was only half an hour late, they clearly needed their sleep. However, somewhat inevitably, the car park was full. Peter dropped off the walkers, went and parked the car and started to hitch a lift back up to the pass. Stroke of luck, first car was the A team off to their crag.

The walkers set off up Crib Goch (G1) and quickly climbed into the cloud and a gentle drizzle. Not nice, but given the focus was on not falling off the ridge in the wet conditions, it did not seem to matter very much. This was when Maria, who was the one who had suggested the Horseshoe, announced she had not done this sort of thing before! Apparently in Greece, where she arrived from only at the end of last year, climbing in the rain is not something they do for fun. I wonder why? Thank goodness for the mist so the fall into oblivion was obscured! Nevertheless, she acquitted herself well, and wisely she proceeded cautiously. So we made it round to the summit of Snowdon, with the view completely obscured (thanks Peter for the forecast!) and chose not to join the queue for the photo at the top! Saturday in November in the mist and it was still heaving! We completed the trip without incident and finally, just at the end, the mist cleared, and we could see where we had been. Jenny summed it up well “The Snowdon Horseshoe is epic”.

The A team meanwhile had been climbing on Tyfan as Dinas Mot was leaking water like Gwyneth Paltrow receiving an Oscar. Paul, Mike and Simon did Pinnacle Ridge (D) and finished up Thompson’s Chimney (HS) while Conor caught up on his sleep. Paul describes it as “An entertaining lead in the wet! And a lot of fun once our hands had warmed up by pitch 3…As was the long scramble descent with 2 racks of gear and wet ropes”

So feeling we had had a good day we returned to the bunkhouse had some dinner and then headed off to the local pub. But not before Jan had flooded the girls’ dorm with her shower. She claims the drain was faulty!

Trip advisor reviews said “The pub is like a step back in time from the 70s”. Indeed it was. But like one in a foreign country (Welsh is the first language). It was like the scene in Hot Fuzz when Simon Pegg walks into the bar and everything goes quiet…I was quite convinced the basement was full of decapitated bodies! But the beer was good but as Jenny found out paying with your fancy iPhone was not an option. Cash or cash was what the Douglas Arms wanted.

The weather on Sunday was clear and bright. The A team went to Tremadog and had a cracking day. Mike and Paul alternately lead the Fang, then traversed across from the base of that route to the belay for the crux 2nd pitch of Diadic. Paul had to yank on some gear high up on the crux as a crucial side pull was wet, but Mike managed to 2nd it clean. They then alternately lead the magnificent One step in the clouds – a classic!

Conor and Simon climbed Christmas Curry (Micha Eliminate) and Oberon. Simon, who has only been trad climbing since June, said “Christmas Curry was awesome, the last pitch was the best pitch I’ve done!” Conor was equally enthusiastic “I loved it! My first time climbing at Tremadog and would definitely return. Leading on the 3rd pitch of Christmas curry felt like a coming together of a lot of the last year. Given HS 4b was an aspirational grade for me at the start of the year, to be multipitching at that grade while feeling, let’s face it, pretty out of it, was an achievement”.

The walkers went and did the Moel Siabod Ridge circuit – a very pleasant route with a nice grade 1 scramble up the SE ridge – and were rewarded with great views of the Snowdon massif and Tryfan.

All in all a great weekend with some great company and Conor has apparently given up baked beans for breakfast!