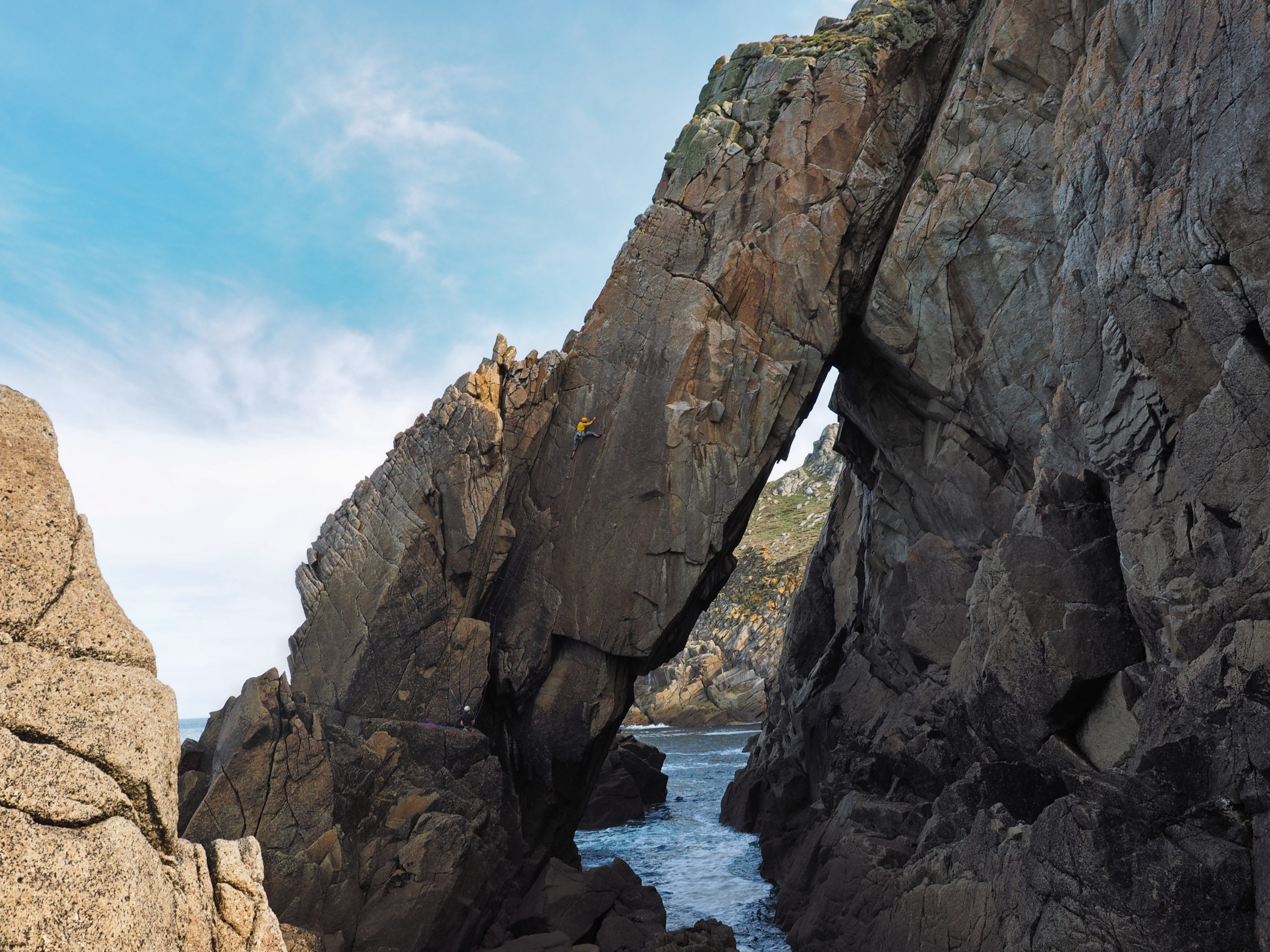 It was an early start on 18th September as we made our way to Ilfracombe to meet the MS Oldenburg – the ship that would take us across the Bristol Channel to Lundy. Being a small island, getting to Lundy is somewhat more of a task than most climbing venues but that only served to add to the excitement as we waited on the harbourside for the ferry to depart. Fortunately the crossing wasn’t as rough as it sometimes can be with only a few green faces (thankfully none from the AMC members).

There was a bit of cloud and haze hanging around the island as the ship pulled in but no worries – we were all still keen to get straight out and sample the wonderful granite sea cliffs. After a quick stop by our accommodation to drop bags off we all set off to various spots along the island’s west coast. Sadly as we were walking in the haze turned to drizzle turned to rain and it was soon apparent that the rain was not letting off any time soon and that we were in for a wet afternoon. After looking longingly at some cliffs in the rain we eventually retreated back to our accommodation to dry off and plan for the rest of the weekend. 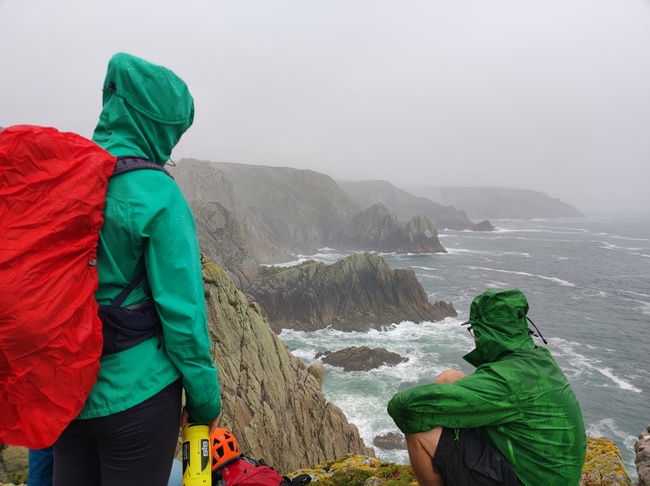 The mood on Saturday afternoon…

We were staying in the Old Light – a disused lighthouse which has now been converted to holiday accommodation with 9 beds over two flats. No sleeping on thin roll mats in damp tents for us! It is a very unique and characterful place to stay and you can even head up to the top of the lighthouse itself for views across the whole island and beyond. 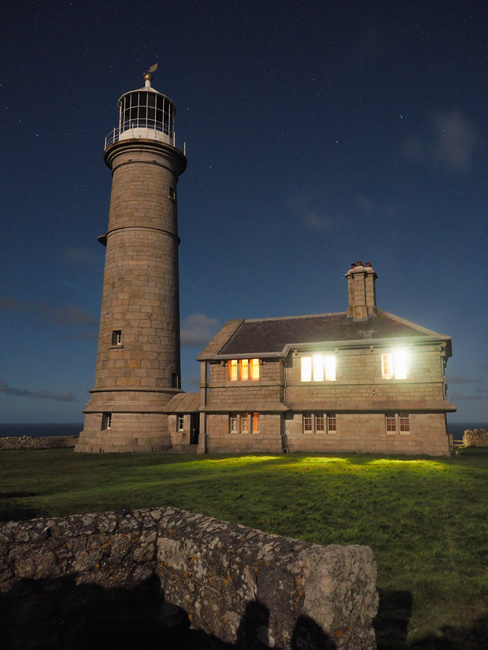 Our home for the trip

The weather was promised to be much better for the rest of our time on Lundy and it didn’t disappoint. While the vast majority of the climbing is on west facing cliffs and so can be a bit damp first thing in the morning no one was in a huge rush to get out at dawn. Nevertheless we all headed out in the morning with clear skies and a light breeze to get stuck into the climbing.

Myself and Lizzie headed to the Devil’s Slide area – a huge ramp leading straight out of the sea and one of Lundy’s most famous features. We alternated leads on Devil’s Slide itself (which thankfully proved to be dry on the upper half after a very damp first two pitches) before heading back down to climb Albion – a fantastic corner climb up the edge of the slab. 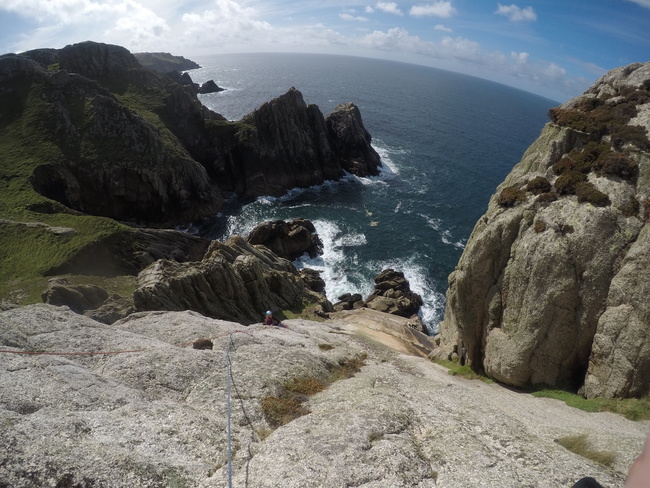 Meanwhile Mike, Matt L and Noel headed a bit further up the coast to seek out Headline. Unfortunately a bit of trouble with the route finding found them going through some much tougher and much less protected ground before finally finishing up the right line. Fortunately some strong climbing got everyone through safe and sound. They then headed down to finish the day on Albion not far behind myself and Lizzie. 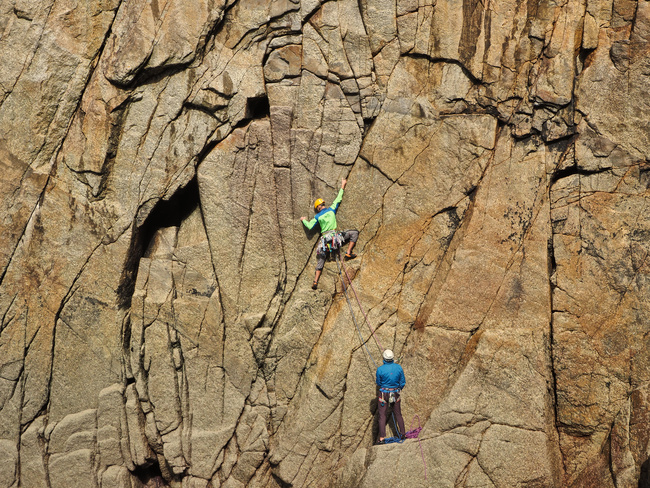 Matt starting up (not quite) Headline 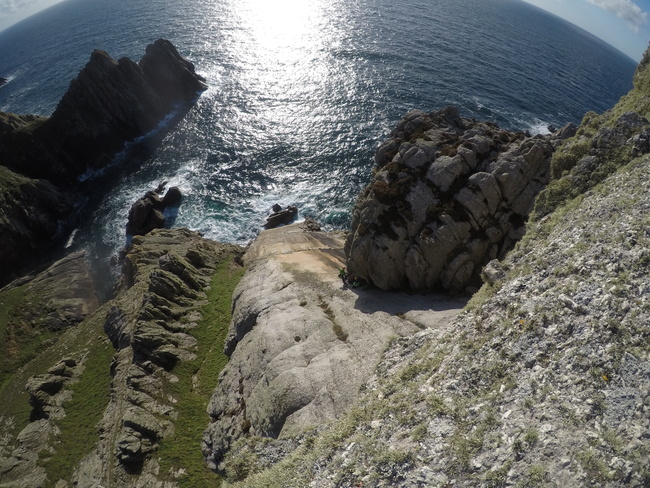 Looking down the Devils Slide with Matt, Mike and Noel on Albion

Matt S and Alex headed up to Seal Slab in the morning – finally getting on the crag that they went to look at in the rain the previous day. They climbed Seal Slab before seeking out Stuka and then finishing the day on Capstan’s Arête.

James and Steve made their way to Wolfman Jack wall and set to getting up Venus Flytrap. James was a little spooked by the prospect of a tough move above two shallow micro cams so handed over to Steve who dispatched (though not without a wobble at the awkward crux). They then moved onto Wolfman Jack (the route itself) with James taking the first pitch (an off width which is a bit spicy without loads of large cams). Steve took the hard top pitch and fell on the very last move. They then went and finished the day by ticking off Indy 500.

That evening with everyone back we all headed to get food at the Marisco Tavern – the island’s only pub. Of course being a Sunday a few of us had to sample their roast dinners (although sadly not everyone made it there in time for the last food orders and had to make do with a cheese board from the dessert menu). 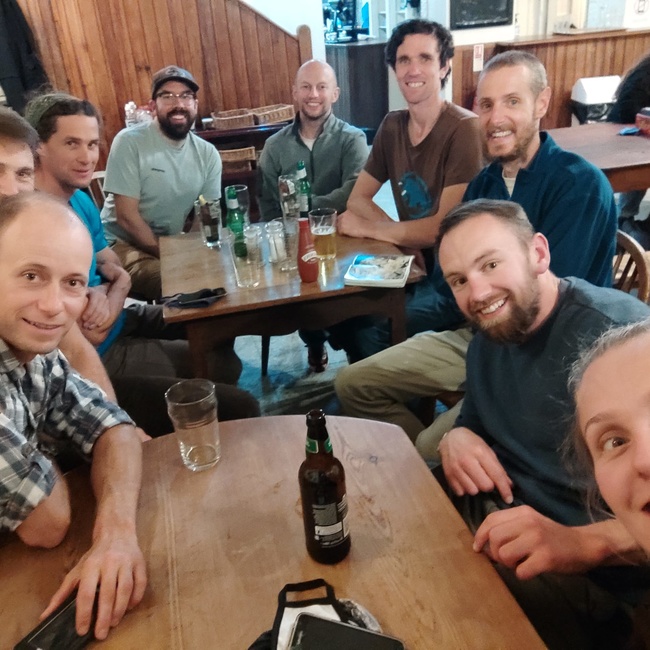 Enjoying Lundy Pub of the Year

It was another fine day when we headed out on Monday morning. Matt L, Mike and Noel stayed a bit closer to the accommodation and abseiled into Landing Craft Bay to climb a greasy and awkward Shamrock, before going back down to climb Meninirons while Lizzie and I followed in their footsteps up Shamrock. 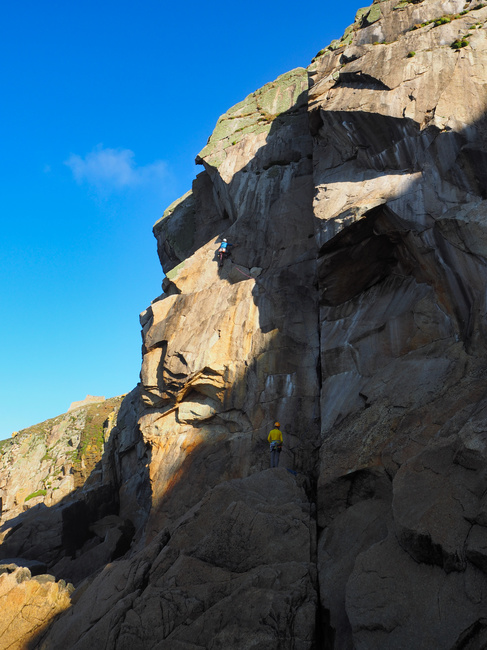 Noel and Matt on Shamrock

We then switched up the teams a bit with Matt L and Mike setting their sights on Destiny while Noel and I had the plan to boulder hop across the bay to seek out Indy 500 around the headland. Unfortunately Destiny was just a bit too greasy and so Matt was forced to lower off that before they climbed out on Cow Pie – one of the easier climbs on the wall but one that nonetheless had a very worryingly loose top section. An abseil recovery of the gear left on Destiny was then in order.

Meanwhile, Noel and I were making our way across the bouldery beach, aiming to get around the headland before the incoming tide cut us off. There was in fact two small headlands between where we were and the climb we were aiming for and we only just made it past the first (with some well-timed hopping across wave-washed boulders) but found the second one impassable. Now stuck between the two headlands we roped up and looked upwards to what at first looked like an amenable route out but what soon became apparent was a chossy horror show, complete with loose blocks, numerous species of plant life and a big pile of loose dirt perched on top of it. Fortunately the climbing was straightforward and we both made it back to solid land soon enough but by that point our psych was all used up and so we decided to call it a day. This should serve as a reminder to not push your luck with the tides (something I really should write on the back of my hand for my next sea-cliff visit).

Alex and Matt S started their day off with a visit to the Flying Buttress – a huge leaning slab of rock that is another of Lundy’s most striking features. They climbed Diamond Solitaire – the classic route taking the line up the corner then into the middle of the slab on the buttress. They weren’t yet done with Lundy classics and so decided to make their way up to the Devil’s Slide to tick off the namesake route which they topped out only just about beating the darkness that was quickly closing in (good thing too as the headtorches were safely tucked away in the bags by the abseil descent). 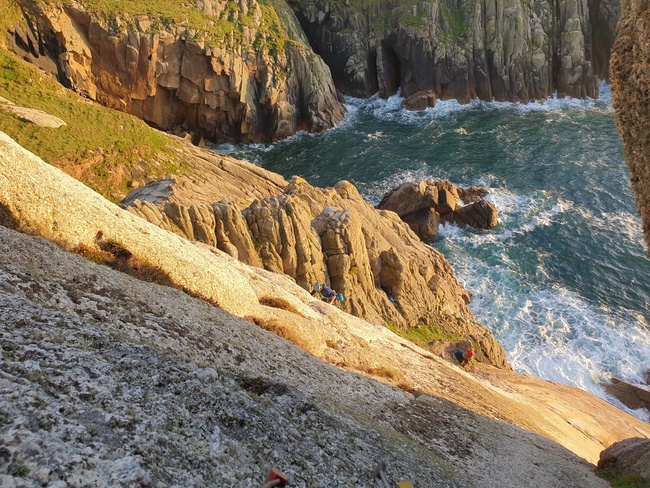 A sunset ascent of the Devil’s Slide

Steve and James were also at the Devil’s slide, though they had headed there first thing to make the monster abseil down the back of the slide to take on Redspeed. James was psyched to get the lead on this and ticked it off despite the greasy conditions. They then followed straight on to Shark which Steve described as “a bit XS” and may not be with us for all that much longer. It is wild, with the prospect of a barn door from the top of the arête in full view of everyone on the Devil’s Slide. They then finished the day with Steve leading all of Satan’s Slip and James following in approach shoes due to fried feet. 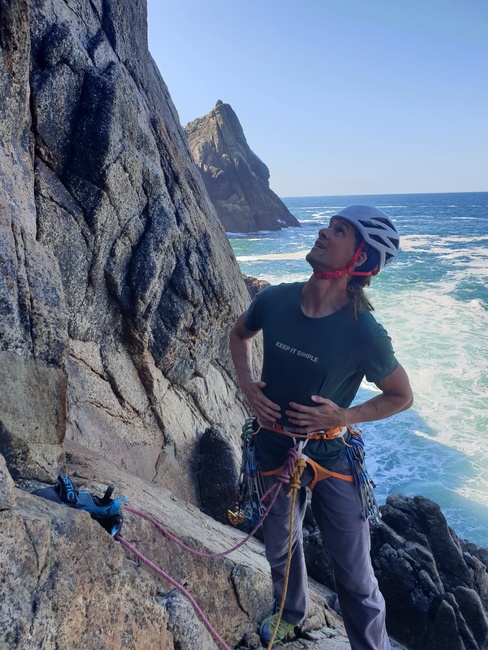 Tuesday was our final day on the island and after a morning of making sure everything was clear from the accommodation (think curry and roast veg for breakfast and whole pints of milk for drinks to take climbing) we set off to make the most of our final hours on Lundy on what would turn out to be the best weather day of the trip.

Matt L, Lizzie, Mike, Noel and myself set off to the Flying Buttress for it’s easy access and relatively short routes should we need to make a run for the ferry later in the day. Matt and Mike climbed Double Diamond (which could have done with a couple more hours time to dry out) before heading over to the climbs on the main cliff and climbing Solitaire View (albeit thinking it was Diamond Crack).

Meanwhile Noel and I avoided the dampness on the lower part of the buttress by climbing up Horseman’s Route and finishing up the top part of Diamond Solitaire. Mike and I decided to get one last climb in on the trip and headed back down for a go at the rather burly Diamond Crack after working out exactly what line it was. 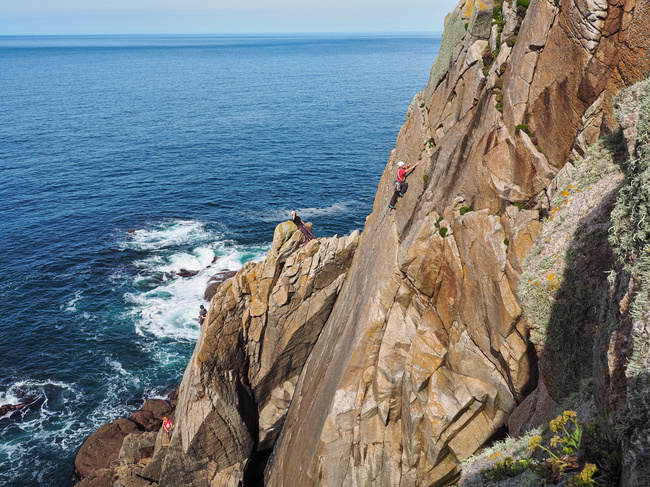 Me on Horseman’s Route

Matt S and Alex meanwhile had headed to Landing Craft Bay so they themselves could have a go at Shamrock. Sadly the greasy wet conditions and the fact that the crux move is a slippery crack right off the ground meant that they had to abandon that idea and so scrambled out around the headland.

For their final route of the trip James and Steve sought out Quartermass in Deep Zawn – definitely an atmospheric place! James did the first pitch which had some loose rock but some fun and well protected moves. Steve did the top two pitches with the middle pitch covered in detritus and with some pokey ankle-breaking moves off the belay. The top pitch was a nicely positioned crack with some hard crimpy moves. All in all a good adventure route! 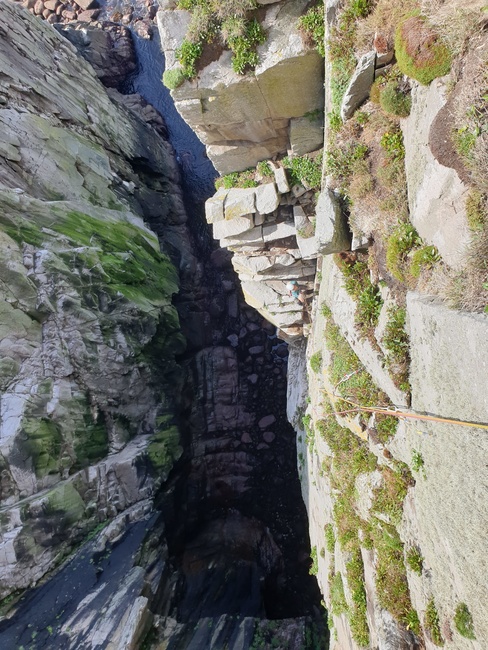 With everyone done with the climbing it was time to get ready to head back. There was still a couple of hours before the ferry so we made the most of the hot sunshine with ice creams, chilling out on the grass, exploring some of the old buildings and having a paddle in the sea. All too soon though it was time to board the ferry to take us back to the mainland and reality. 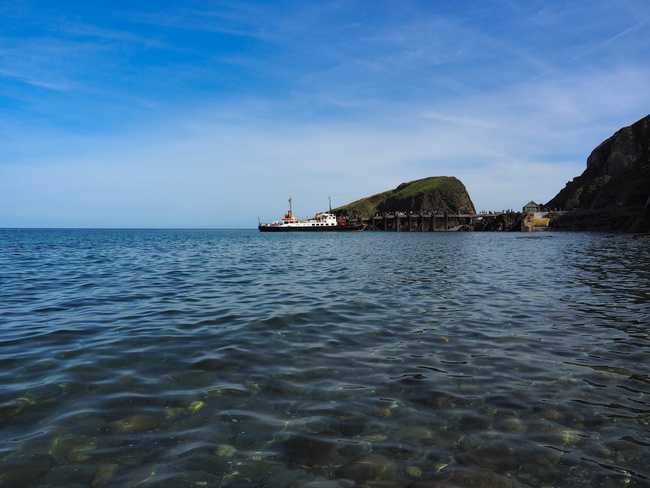