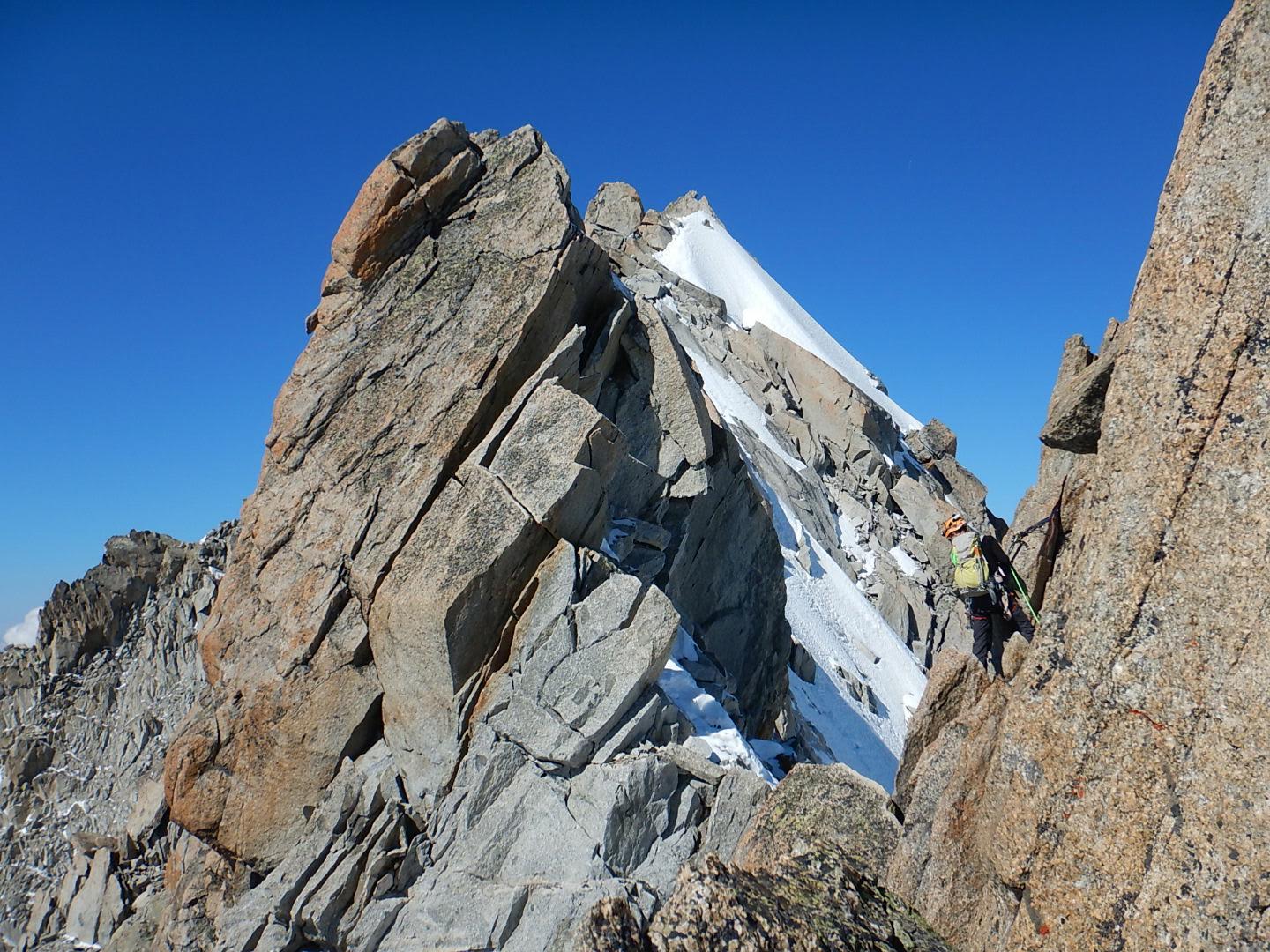 On the walk in to the hut the plan was fairly simple, climb a couple of easy routes to get feel for the conditions, and avoid any epics. The Refuge Albert Premier perches on the edge of the Glacier du Tour, with great views across the ice to the sounding peaks. Most of the features looked alluring, but it was hard not to fixate on the imposing Aiguille du Chardonnet directly across the valley. A stee face of rock and ice dominating the skyline, with an exposed shoulder protruding to its North East.

Over a great dinner, lubricated with wine courtesy of Peter, the guide books came out to ‘check the details’ for the next day’s objectives. After a bit of group reshuffling, Fernando and I looked like we’d end up climbing as a pair. Both having reasonable alpine experience, and seeing the impeccable weather forecast for the next day, our plans started to feel a little on the tame side. Maybe we should go for the big one? The familiar RockFax ‘Top 50’ icon on Forbes Arête was beckoning. AD 3, three to five hours with a three-hour approach, doesn’t sound too bad. There’s insufficient signal to check the UKC comments, but I’m sure it will be fine. That settles it, reschedule breakfast and a quick repack as ‘probably won’t need it, but may as well through in the second axe and some extra screws’.

At just before 05:00 Fernando and I set off from the hut to hit the first steep section by first light. We made good time across the glacier, approaching the mountain as the dawn light started to illuminate its slopes. The approach looked steep, very steep. Still we continued towards where the guide book showed the now improbable looked approach up a snow slope. As we neared, its angle seemed to soften into something that looked more feasible; however, it also became apparent it was not snow, but hard ice. Fernando lead off, with 30m of rope and at least two ice screws between us. Those second axes proved essential. Progress slowed drastically, requiring hard swings of the axes, and firm kicking of the crampons. I was aware I should have sharpened these before I departed the UK, but it had slipped my mind until now. Note to self, sharpen my tools before next climb!

Eventually we topped out of the ice slope as the sun was breaking the horizon. The plateau was short reprise, as before long we were kicking and swinging back up another steep ice slope, still a fair way short of the actual documented climb. Eventually we crested the ridge to where the guidebook showed the climbing start. Were we supposed to have gotten here in 3 hours? Surely not! I lead off along the ridge with Fernando climbing simultaneously about 25 meters behind. For those unaccustomed with alpine climbing, this is a common technique to both move together with gear between you in case of a fall. This is not like pitching, and a fall by either party could be extremely serious. It is however, a lot faster way of covering terrain and essential for many long mountain routes.

The route now followed the shoulder all the way to the summit. With sections of rock up to 4b, intermixed with snow and ice. The description was vague, basically to follow the arete and bypass anything off too much difficulty on the north side. Although of only slight technical difficulty, many of the snow slope traverses were widely exposed, with hundreds of meters of extremely steep ice just below your feet, and very limited protection. Eventually we reached a steep rocky step. Although relative the wind was still where we were, looking up you could see the clouds rushing past the top of the pinnacle about 20 meters above; the tell tail sign of an imminent summit.

We reached the summit just before 15:00 and were greeted with a spectacular panorama across the Plateau du Trident and imposing ridge of the Aiguille Verte. Knowing the decent was complex and hard to navigate, we did not hang around too long before moving off.

The guide book specified to decent the southwest ridge for ‘20m’. After disusing it, we decided this must mean 20 meters, not minutes. 20 meters later, we were staring down an improbable looking gully. Surely it can’t be this? We decided not and continued further down the ridge until finding a less bad, but still far from good, looking gully a bit further. It must be this, we’ve already gone far more than 20 meters. Initially we started the decent on foot, but quickly found ourselves in the in the same hard, brittle ice we had encountered on the approach. Given the abundance of in-situ tat and maillons, we switched to abseiling for serval pitches. As clouds rolled in and the gully steeped, it was starting to become apparent this is not the described decent.

Eventually, Fernando found himself at the top of an 80-degree slope of hard water ice, falling away around a corner and into the seeming abyss below. This was clearly wrong, but it was unclear if we had descended the summit ridge too early or too late. After a bit of shouting to and fro, with me still at the ab station above, though a gap in the cloud I spotted something that may give us a clue. Is that a cairn on the other side of the ice slope, or just a random pile of rocks? The more I stared, the more I become convinced it was not a natural feature. It could be possible to cross the ice slop to reach the rocks on the other side on which the pile sat. However, it would be extremely difficulty to reverse the move if we needed to do so. I descended to Fernando, and we made the decision to attempt the cross. I stepped out, happy to have taken the extra ice screws, and extremely tankful for my second axe. The ice was not the nice sort, but brittle. Each axe swing either did not bite, or shattered away a whole section of ice. Eventually I made it across and belayed Fernando over. It was a cairn, leading to another and then a solid ab station. We realised we had now found the official decent, and were only three ab pitches from the start of glacier below.

We had though it may be plain sailing from here, but the mountain had other ideas. The abseils put us out at the top of steep slope of what looked like neve. Alas it was not to be, and transpired to be yet more hard ice. Fernando tentatively descended the ice, placing screws to protect us in case of a fall. After about 70 meters of delicate down climbing the ice, we reached a saddle, and could see an established track for the first time. Following this for a short distance, it crested a mound and dropped steeply down the other side. We approached with caution, seeing a slope of at least 70 degrees falling away for 100 meters of so below. Fortunately, the snow gods gave mercy on us for once, as the slope was the best quality snow we had encountered all route. We made the final decent steps over a crevasse to reach the plateau below. The track now weaved its way between enormous crevasses that could swallow houses whole.

The last of the dusk light across the ice made for a spectacular sight, but we had little time to stop to admire the view, as were not down yet; there was still one further slope to descend before we reached the Glacier du Tour. It was now dark and we began inching our way down the final slope. Would we once again get lucky with the snow? No, the mountain had one last treat in store, hard ice, toped with a thin layer of semi frozen snow that was only loosely attached. As the slope steepened, I found an in-situ ice screw and decided to clip it to the rope between us. I had descended a further 10 meters or so when I felt the large slab of soft snow on which I was standing slip away beneath me, and I was falling. Practise kicked in and I grabbed my axe, adopting the arrest position, which work a charm. Back on my feet, now a bit further down the slope I continued. Suddenly it happened again, this time I was on my back sliding down the slope towards a craves.  Grab axe, hold it over shoulder, turn and arrest, it worked just as the rope was starting to go tight on the screw. I promptly placed another screw to make safe. I now found myself on much easier ground, but Fernando was still above, and understandably not enthusiastic to repeat my way down. He abseiled from the in-situ screw to meet me, and we tentatively descended the last few meters placing screws at regular intervals.

Eventually we made it to the relative flat of the Glacier du Tour. There was still some crevasse to navigate on the way back to the hut, but these proved to be fairly straight forward, minus one leg finding a way through a covered snow bridge. Last light having long since passed, we opted for a longer return route across the glacier, to re-meet the approach track on known safe terrain. At just before midnight, we arrived back at the hut.

We subsequently read the UKC comments. Many groups had been over 24 hours on the route, with one recent group being out for over 30. This certainly made us feel a lot better. The following morning, the hut staff asked ‘was it not very icy?’ Well, yes!

Despite all, it was a good adventure and my personal highlight of the trip. The route is probably better and easier earlier in the season, when there is more snow. The actual route presented limited difficulties, with the approach and decent feeling like the crux. A great route, but not one to be underestimated.