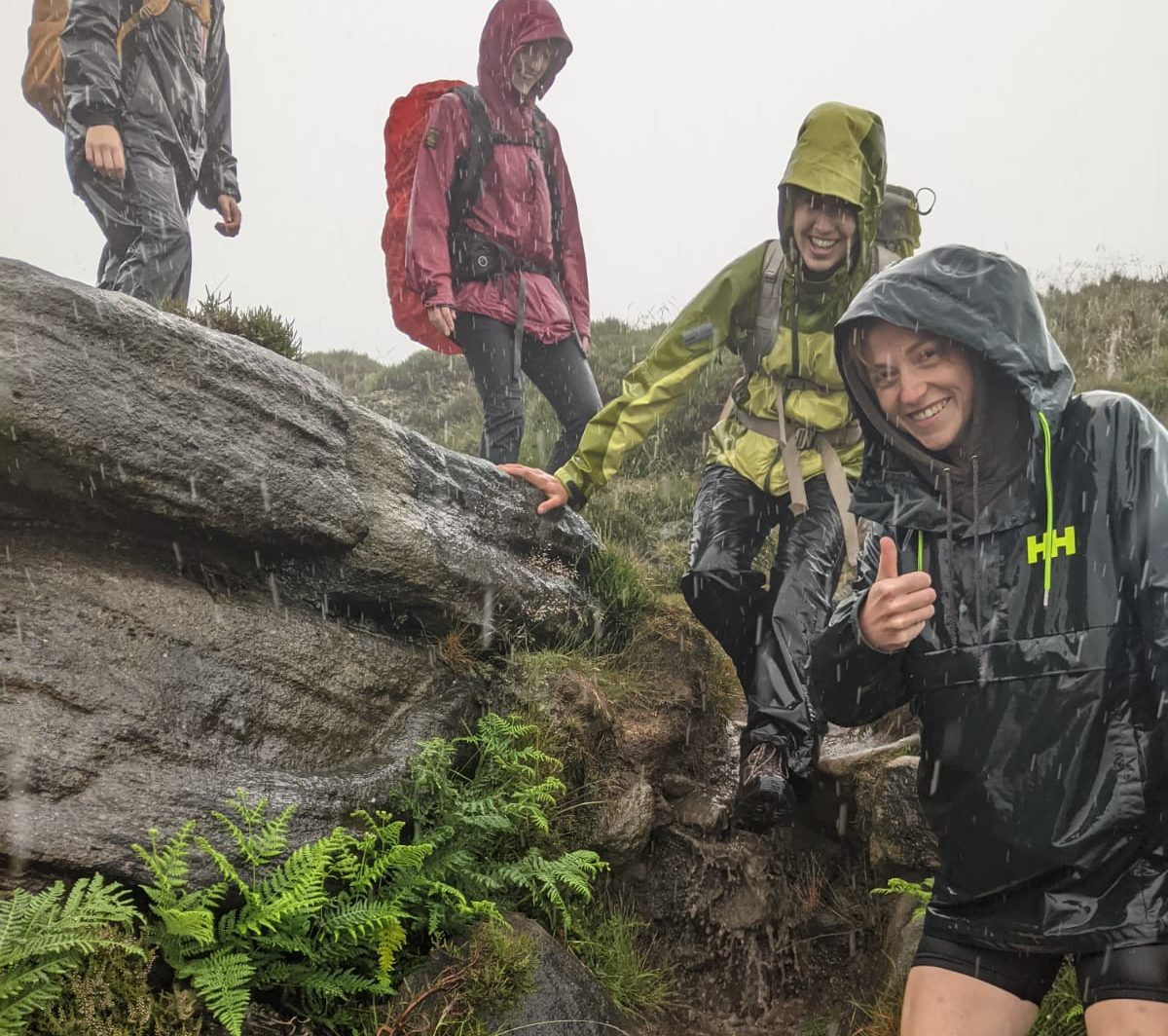 Maria, Esther and Isabel headed up early on Friday for a day of trad at Bamford Edge – low grade stuff including some solos and some leads for Issy and Esther.

Polly and Emma headed up to Stoney West for an afternoon of sport climbing. Unfortunately after climbing just 1 route, an incident with another group resulted in a very dramatic afternoon of helicopters, paramedics and mountain rescue! Luckily the guy involved got away with a bruised spleen and nothing more. Note to all – ALWAYS TIE A KNOT AT THE END OF YOUR ROPE.

After the crag had emptied, Polly and Emma were able to bag a few more routes in the setting sun before heading to the campsite to share tales of the day with the rest of the group.

After a long traffic-filled Friday afternoon journey from Bristol (which included Pam playing an unimpressed Liv her favourite Jam Crack podcast), Liv and Pam headed straight to Bamford Edge to squeeze in a couple of routes before dark. They were feeling pretty pleased with themselves for getting their trad lead game on (even if, at 6m long, the two routes probably could have been safely soloed), and felt they had truly struck gold when, upon arrival at the campsite in the dark, they were met with Polly’s homemade chilli sin carne.

On Saturday morning all were woken to the sound of heavy rain pattering against tents. Not ideal. Emma, Polly, Laura, Liv and Pam went for a walk around Stanage Edge to gaze tragically at what they were missing out on, while Isabel, Maria and Esther were much more sensible and enjoyed the cafe culture on offer in Hathersage. Not content with one soggy walk, Emma, Laura, Liv and Pam headed out for another walk – this time up to Kinder Scout and, once again, to gaze at a route which required drier conditions. Nonetheless, things soon brightened up and the group managed to get their thrills scrambling down a clough, with trainee Mountain Leader Emma leading. Isabel, Maria and Esther strategically left the cafe scene for a walk around Ladybower reservoir when the sun eventually appeared.

Saturday evening: lovely village pub in Bamford (which Liv was very excited to visit after confessing to have seen it featured on Countryfile) with the England game (the one when we scored loads of goals). Another note: There are two pubs called The Anglers Rest in adjacent villages…make sure to go to the right one!

Emma, Pam, Laura and Liv’s obsessive weather forecast checking for the following day resulted in a plan to rise early, pack up and get to the crag for 7am before the rains were due to come at 12. So we left the pub before the match came to a finish (much to Pam’s disappointment), zipped up our tents and settled down for an earlish night ready for the morning.

The team of four woke up as planned (surprising to all) and set off to Stanage, an incredible 5k long single pitch trad crag with a wide range of grades – perfect ‘baby trad’ for those just starting to lead.

Miraculously the rock was dry despite the rain from the night, which presented Laura with her first opportunity to climb over the whole weekend…and so the baby trad commenced!

Emma paired up with Laura and Pam with Liv. Both pairs tackled crack climbs for the first route of the day. Emma discovered the joys of ‘off width’ crack climbing and all parties had a chance to lead some epic routes.

Around 12pm, the skies turned black and threatened rain. Both pairs decided to start their next route regardless, only to be bucketed on and forced to back off and shelter under a rock. Luckily the rain soon stopped and after a short walk further down the crag, the rock had already dried and we were ready to start another route.

Finally around 2pm the sound of thunder could be heard echoing in the distance. Emma and Pam sat along from each other at the top of the crag having built their anchors, watching the storm clouds roll in as they brought their partners up. There was time for one final route, with both pairs topping out just in time before the heavens opened and lightening cracked. A speedy walk back ended with us all piling into the car dripping wet and beaming from the surprising success of the day.

Whilst Emma, Laura, Liv and Pam were at Stanage, Esther, Issy and Maria enjoyed a history trip to Richard Arkwright’s mill.

A varied trip in all senses…but the combination of great company, high spirits, consistent weather checks and crossed fingers and toes resulted in a cracking time.

Big shout out to Helen who for organising the trip and very generously lending her precious trad rack, without which Emma and Laura would have been very much grounded. Though you were unable to make it (last minute injury!) you were with us in spirit!