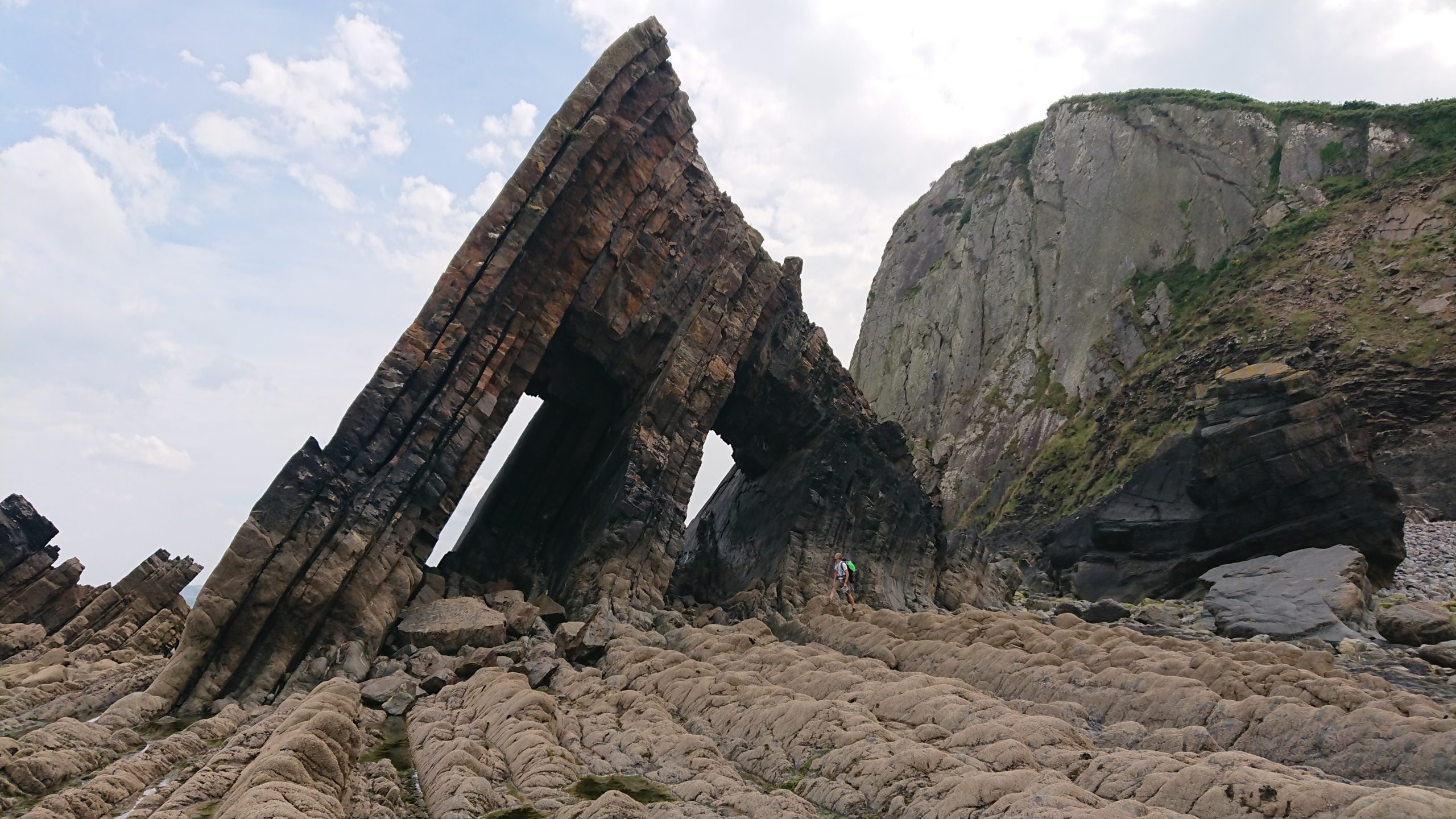 From 23-25 July 2021 the AMC held a climbing meet based at Bryder Farm Campsite near Bude.

On Friday Matt L and I made it down for around low tide, midday, and headed straight for Black church rock. One of my personal objectives for the trip was sacre coeur, an immaculate slab route on the left skyline of the photo above, beloved of Ian Parnell apparently.

The route was fantastic, on an amazing feature. We scrambled back round and realised the tide was rapidly stopping any chances of doing the other starred route.

Matt had been doing some research and we mused over a bagel that we could relocate to non tidal spekes Mill mouth and do the classic route Pressure drop.

It had been on my ticklist for a while but I was secretly glad Matt opted to lead the route. It was seriously intimidating! Matt seemed to enter a kind of fugue state and ticked it off perfectly,with no recollection, and his first E3 to boot!

We met up with Mike, Joe and Kate back at the campsite and started to make plans for the next day over a few beers.

The weather wasn’t looking hopeful so we went for the Scottish ‘have a wee look’ approach to Gull Rock, Cornakey and Wreckers Slab areas, fully expecting to just walk back to a tea room in the drizzle.

As we walked in the drizzle stopped, waterproofs went away but unfortunately no suncream went on 😖

Kate got everything started by romping up seaward edge and Joe led walking on the moon. 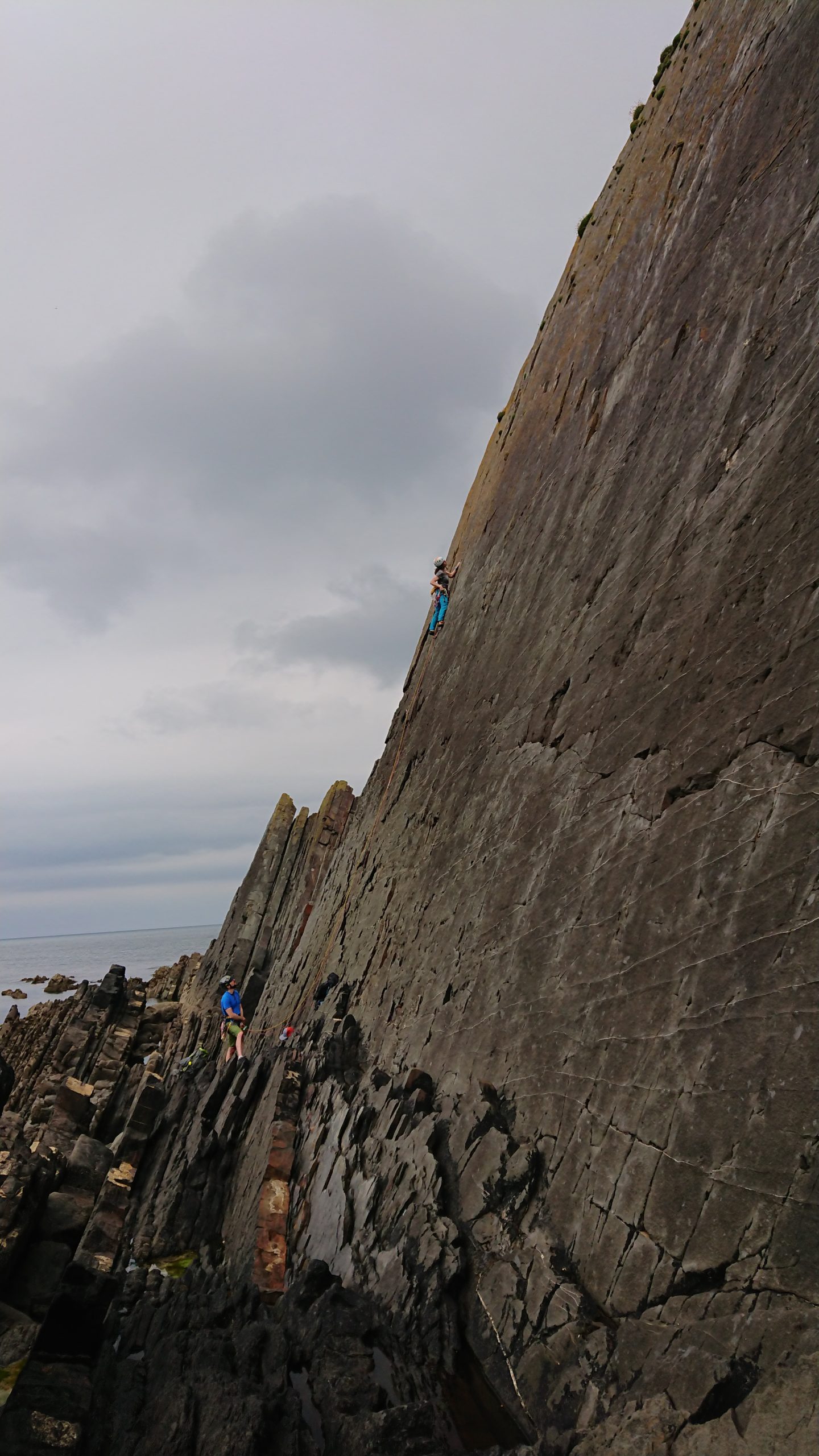 Mike and I did Walking on the moon and Haile Selassie, which spat me off with a snapped foothold, mard. Mike and Joe took the time to tidy up the ab station, Joe heroically carrying out the rotten tat. 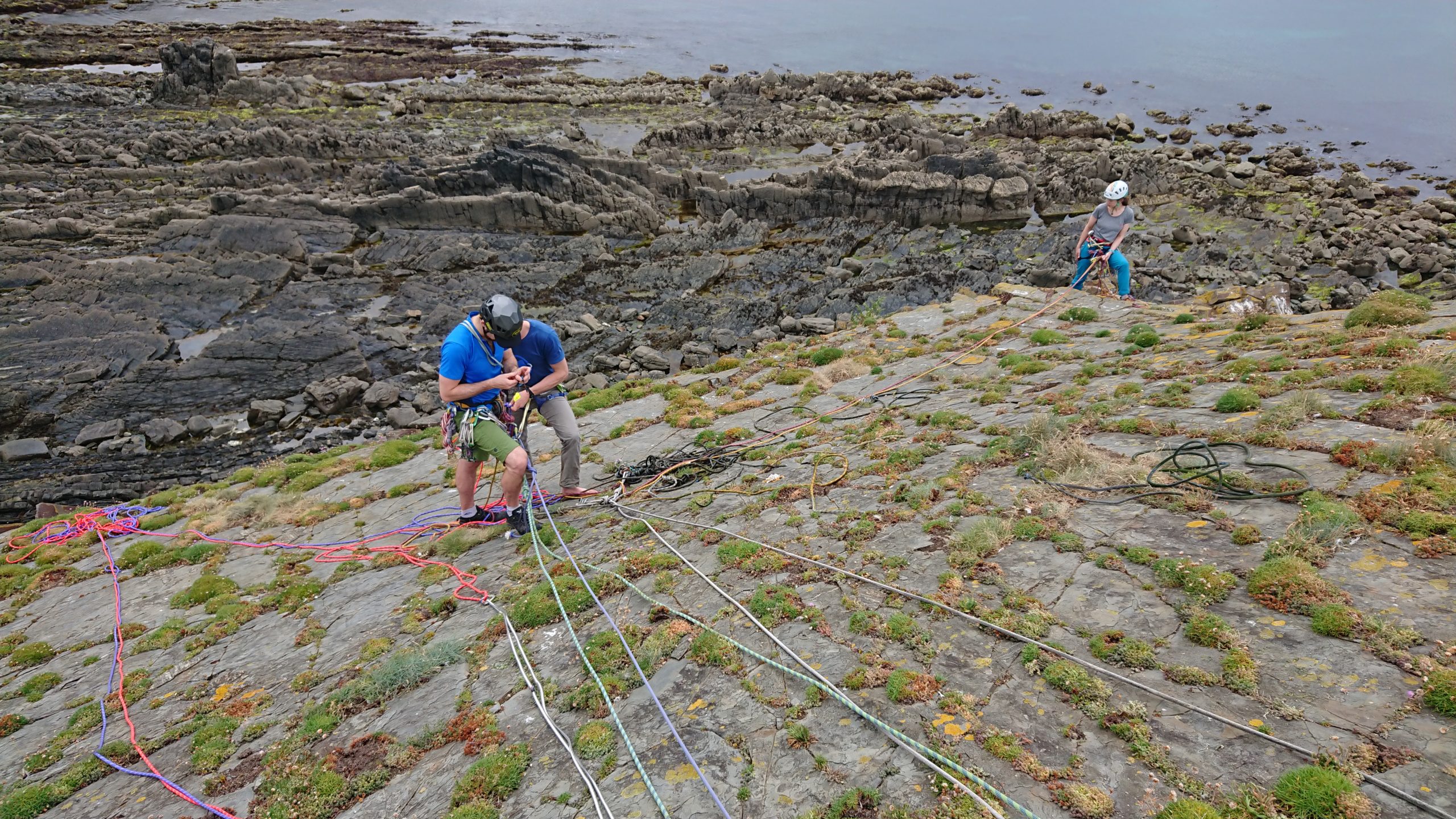 We then moved along to Cornakey where Mike led Stormy weather while Kate and Joe got a head start swinging leads on Wreckers Slab. 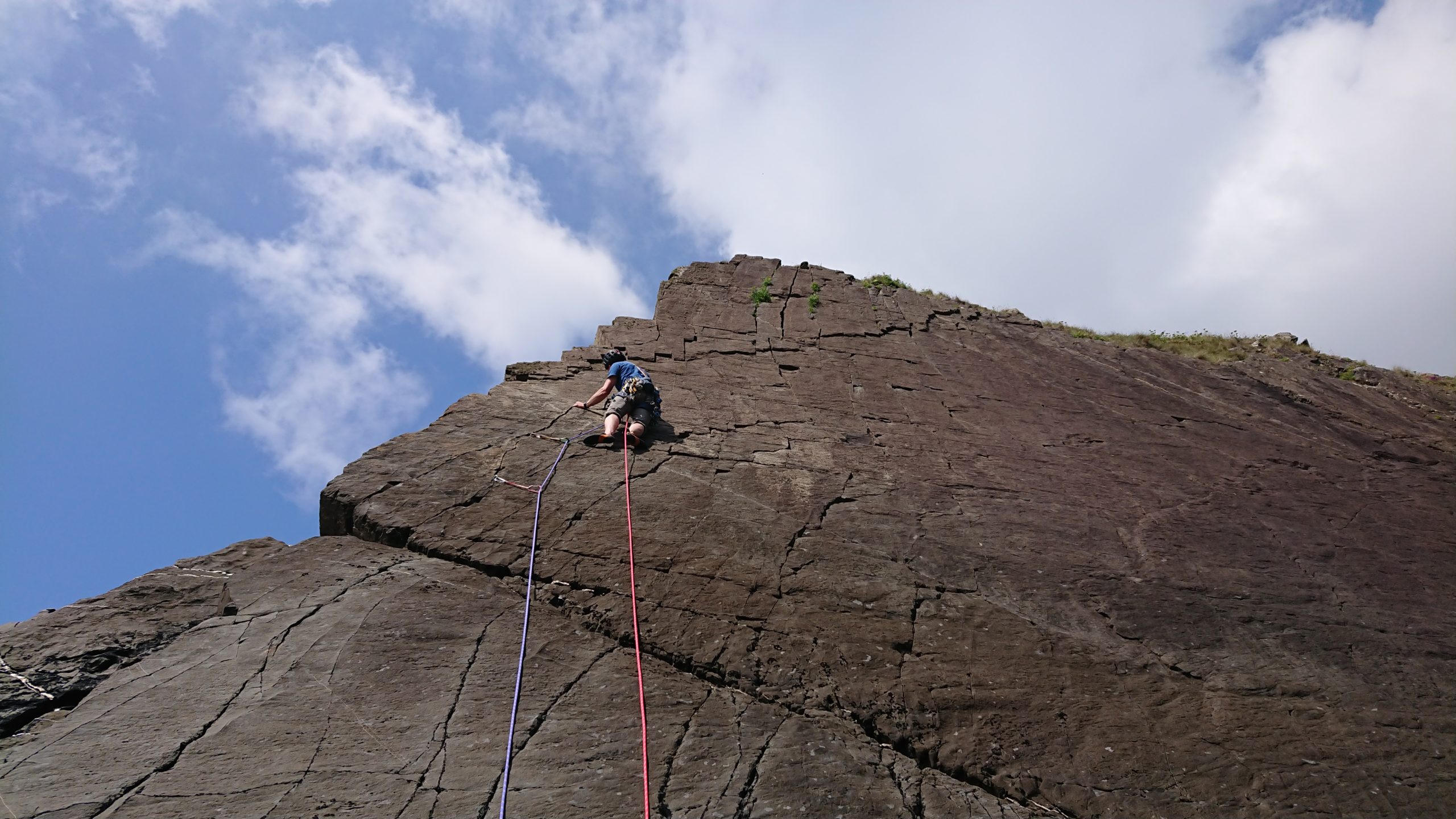 The route didn’t disappoint, three long 40+ metre pitches then a scramble off the top. All on some very hollow sounding rock demanding care. Added to this we all had to turn like rotisserie chickens to try and even up our sun burn. A hot walk back to the car and a short drive got us to shade, crisps and full fat coke at the pub.

James and Steve also made their way down on Saturday and went further along the coast to Tintagel for some bouldering, to get fully warmed up for some cranking on Sunday it seems.

We all met at the campsite with chips, and another beer.

Sunday, the one we’d all come for, Lower Sharpnose. 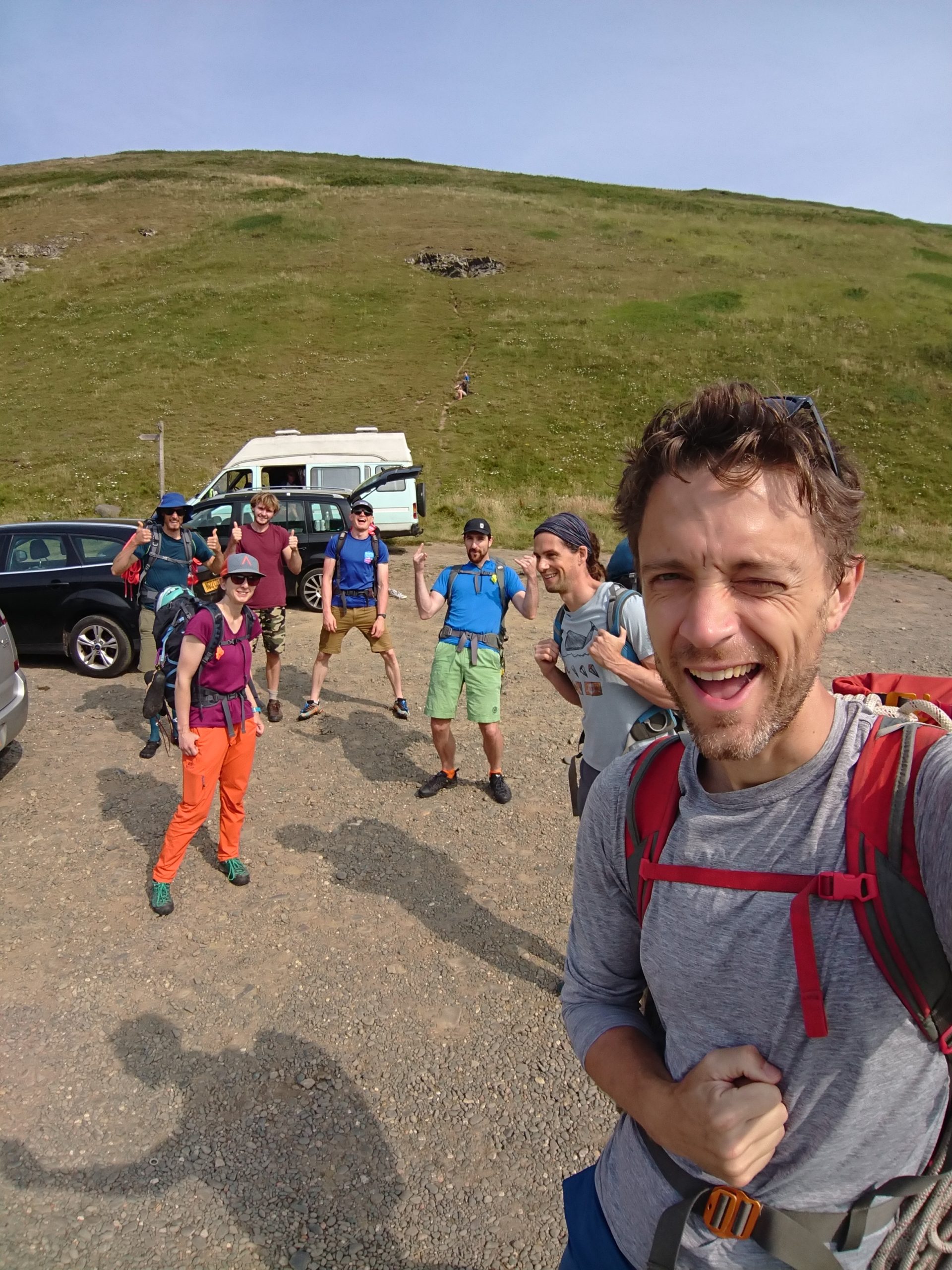 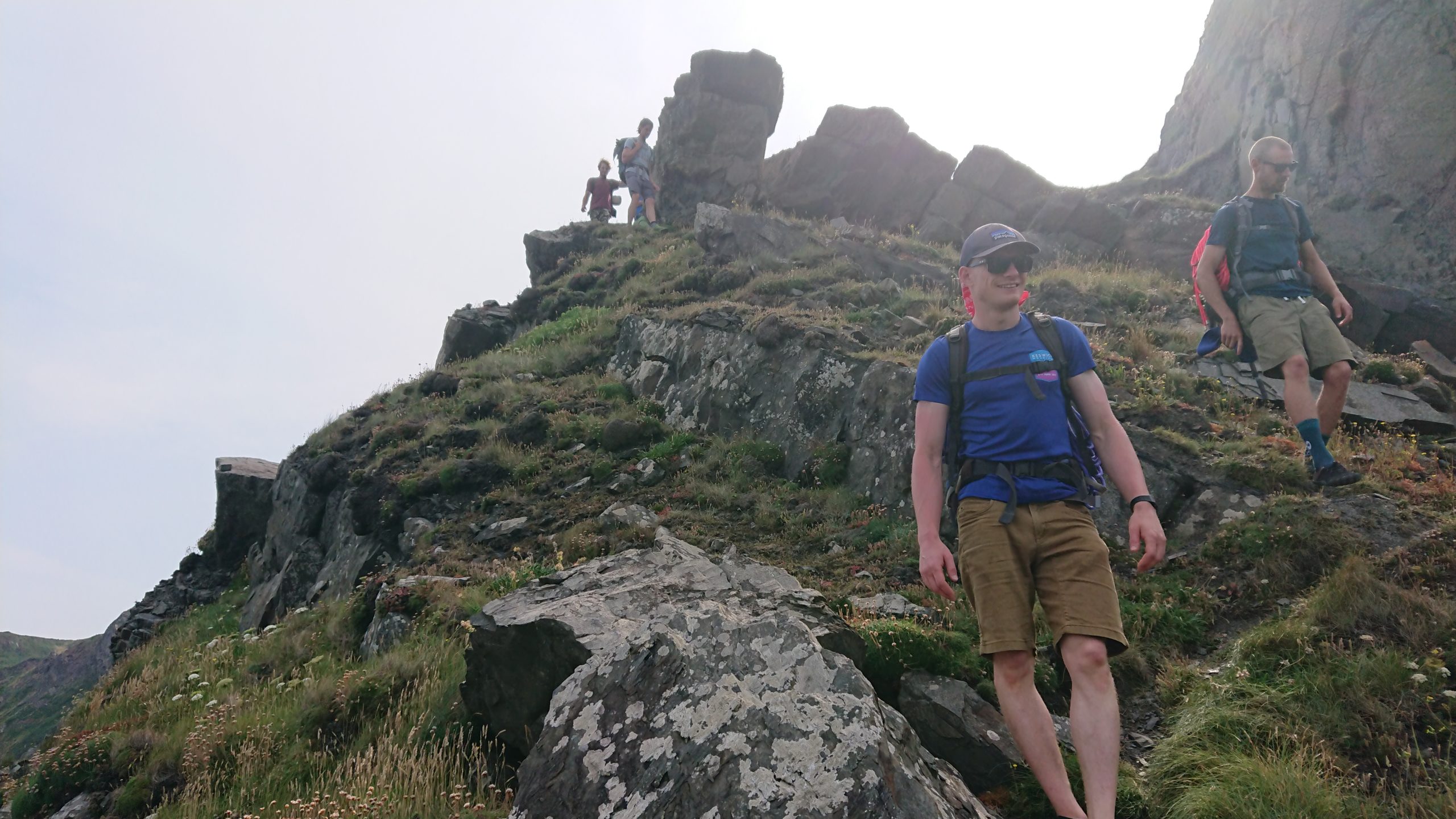 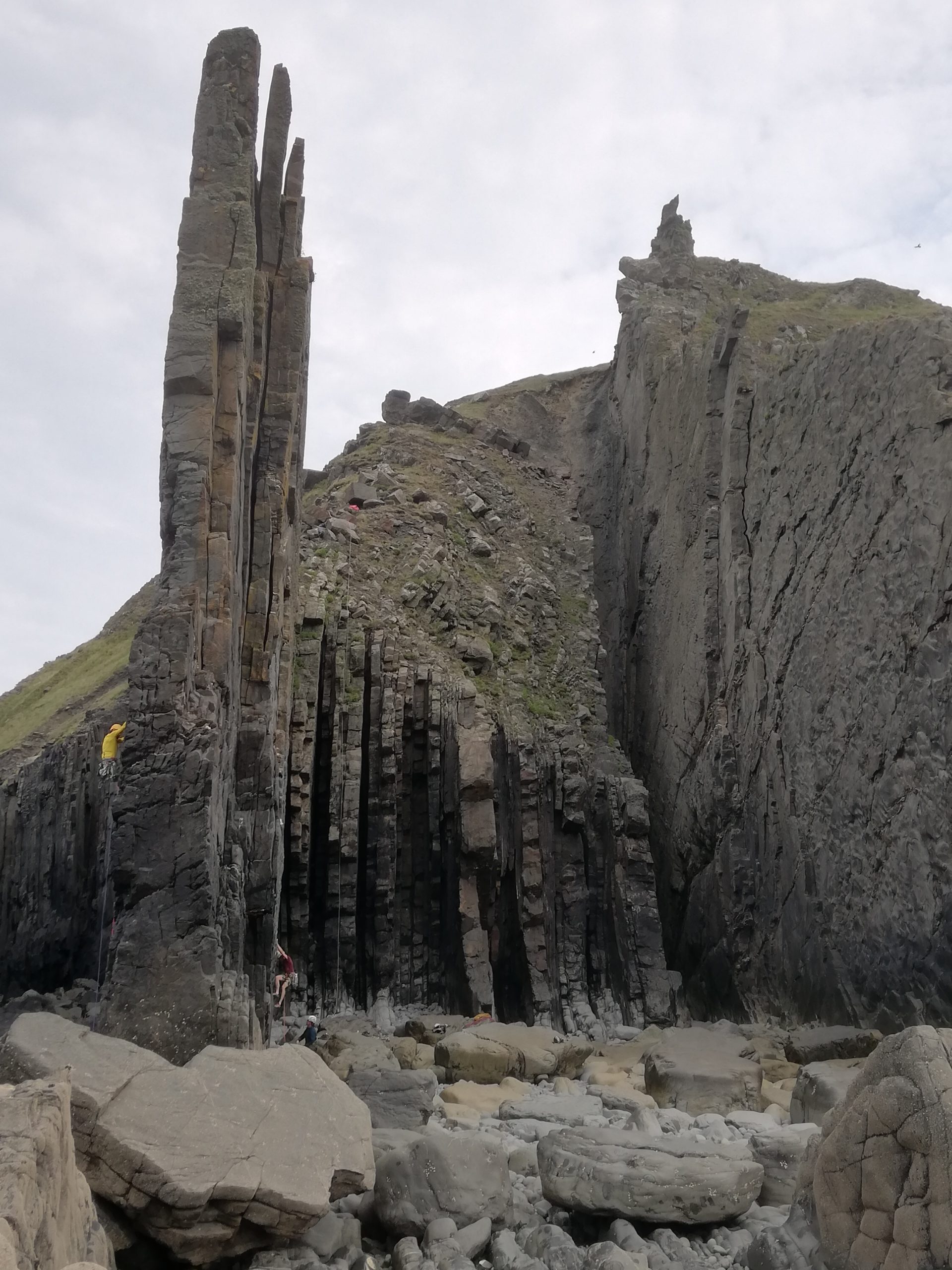 Mascon on the left Diamond Smiles on the right. 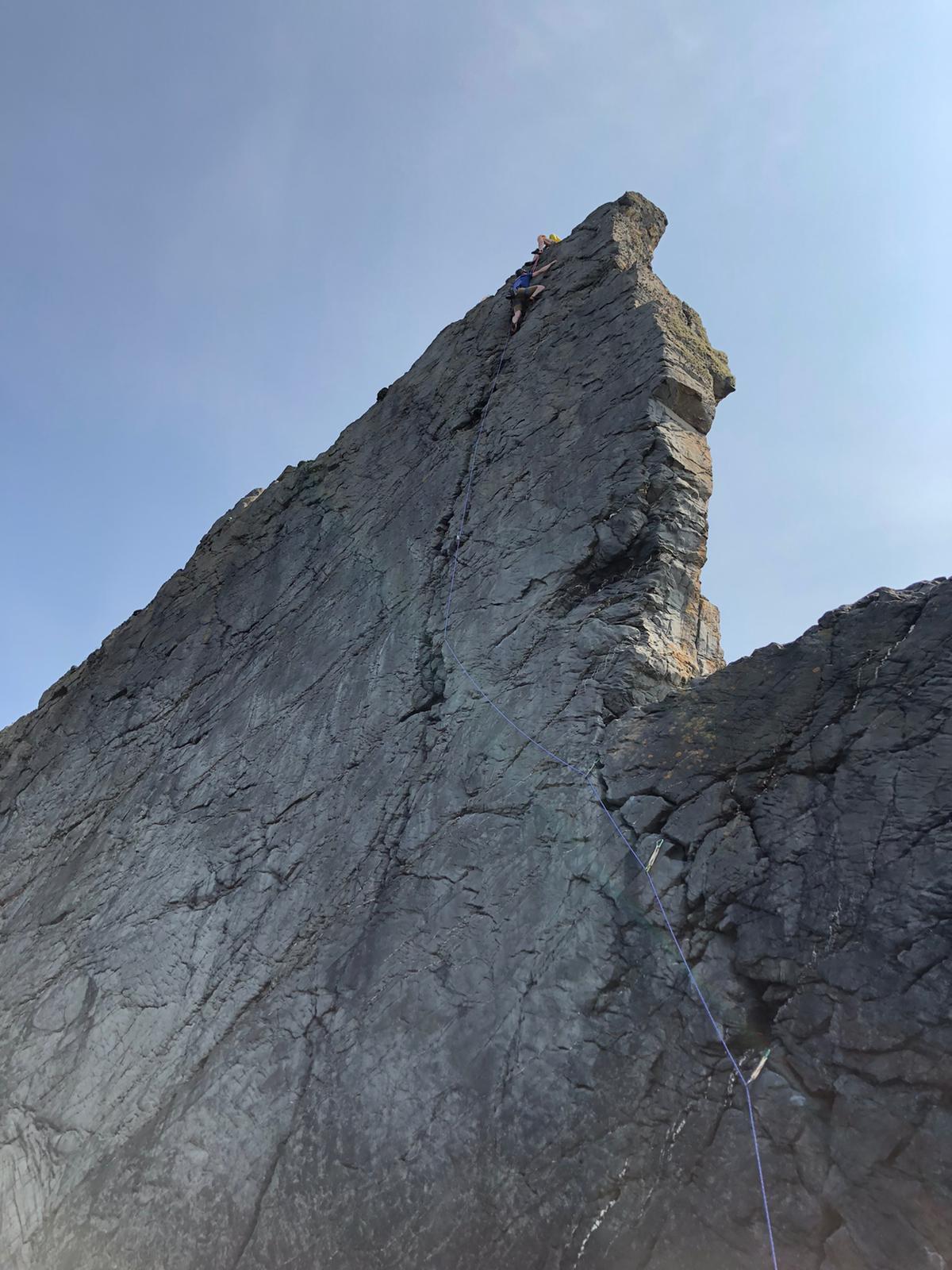 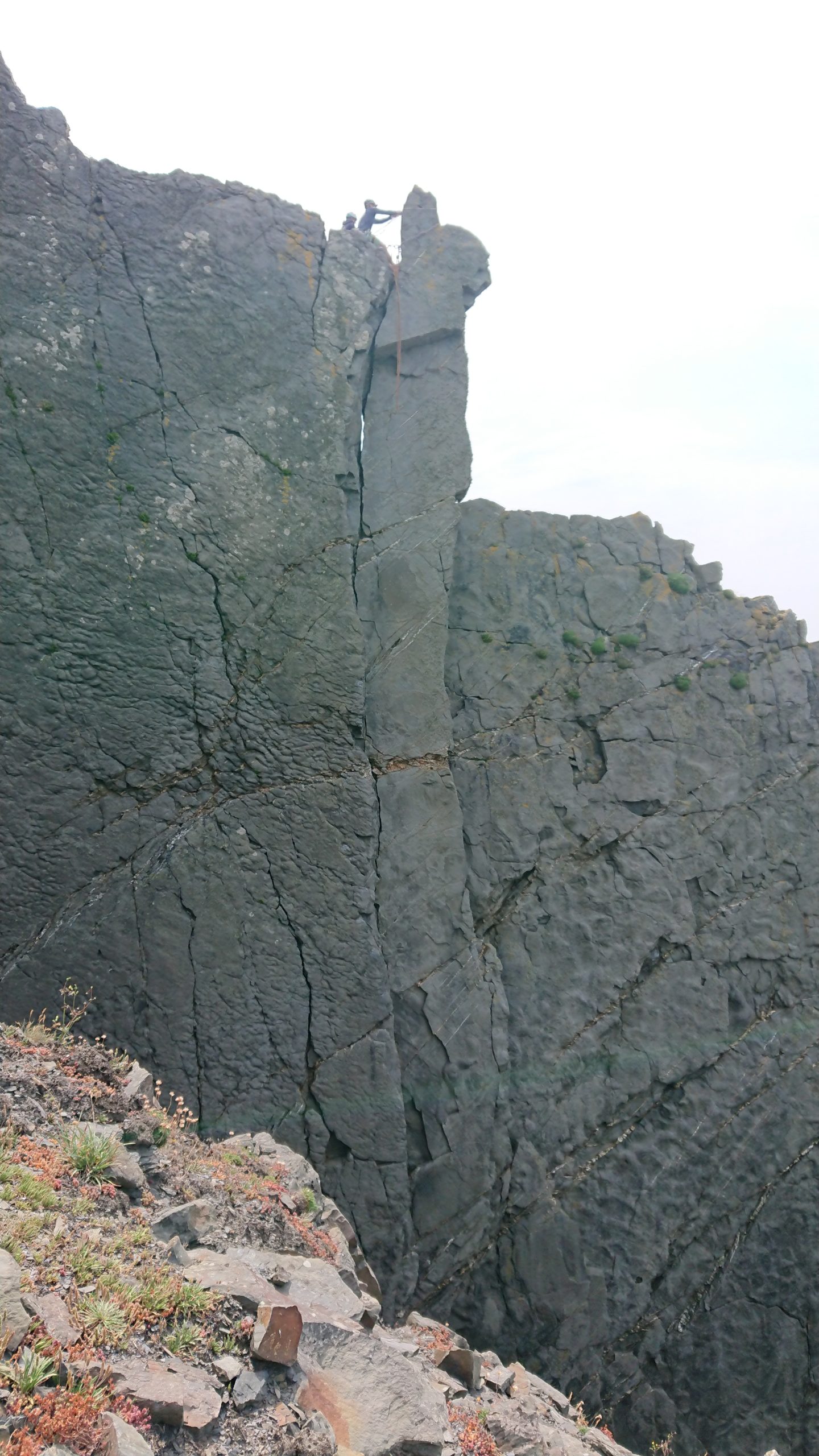 I could go on with the photos, but some words are expected:) (There’s a link at the end for all our photos.)

The middle fin is about a metre and a half thick and 30m high, super featured culm rock. Gear abounds but can be fiddly.

Joe and Kate climbed the soaring Lunakhod, then had a breather and then the crag classic The Smile.

Mike, Matt and I swallowed some brave pills and climbed The Smile, Mascon and Out of the blue.

Steve and James warmed up on out of the blue 😅 then both led Diamond Smiles, which gets E4 in the cc guidebook! And looked it. 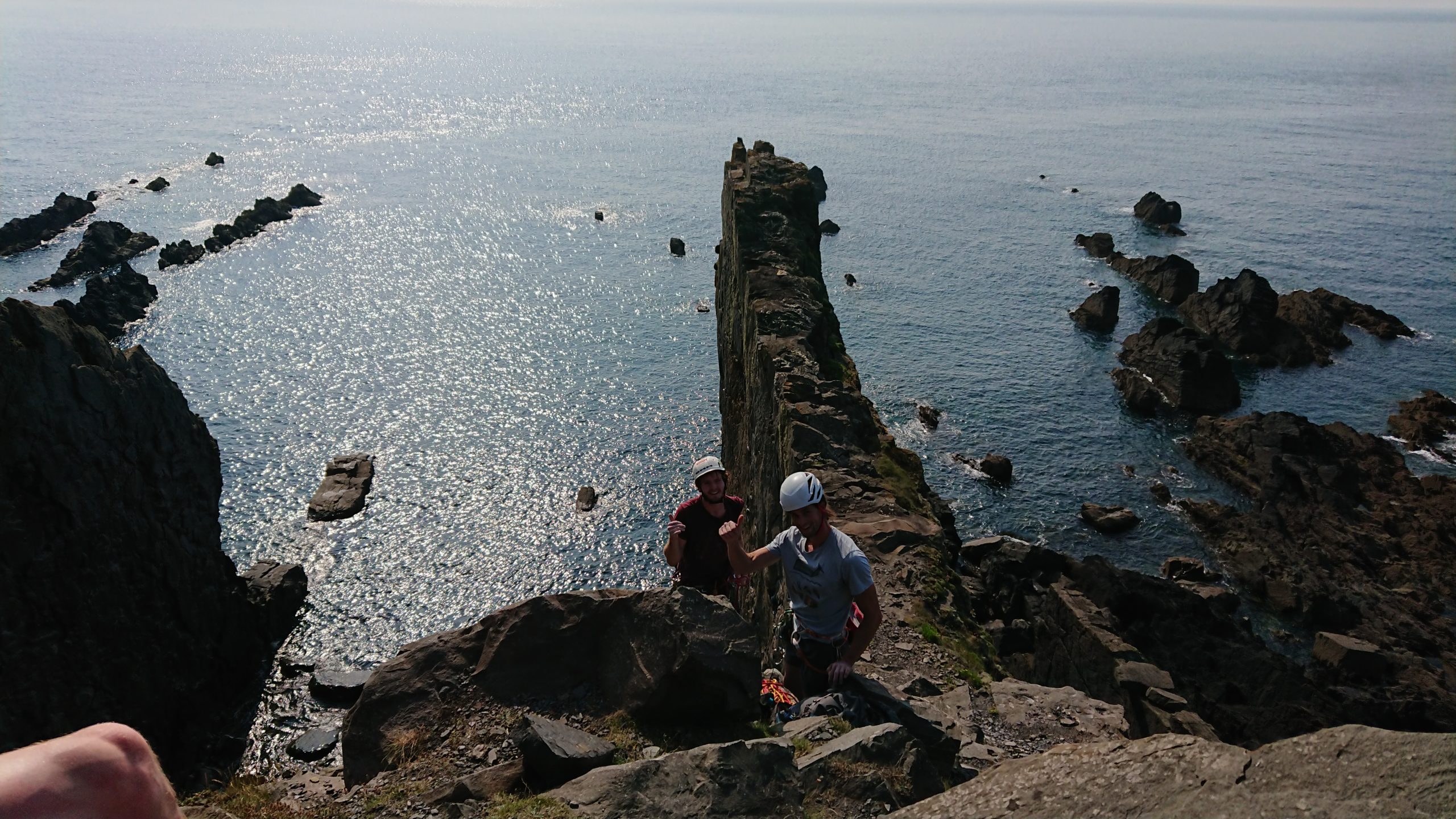 We all made it up with dry feet as the tide rapidly swept in (earlier start next time 😊) and wandered back to the car and the beach for a cooling swim.

Perfect weather, great campsite, great company what more could you want? Maybe a week of it😁

Here are some of our photos https://photos.app.goo.gl/W8T18J6MEZydL9Vg9

The others will hopefully follow shortly once we sync the clouds.

Bit of a taste from another season: