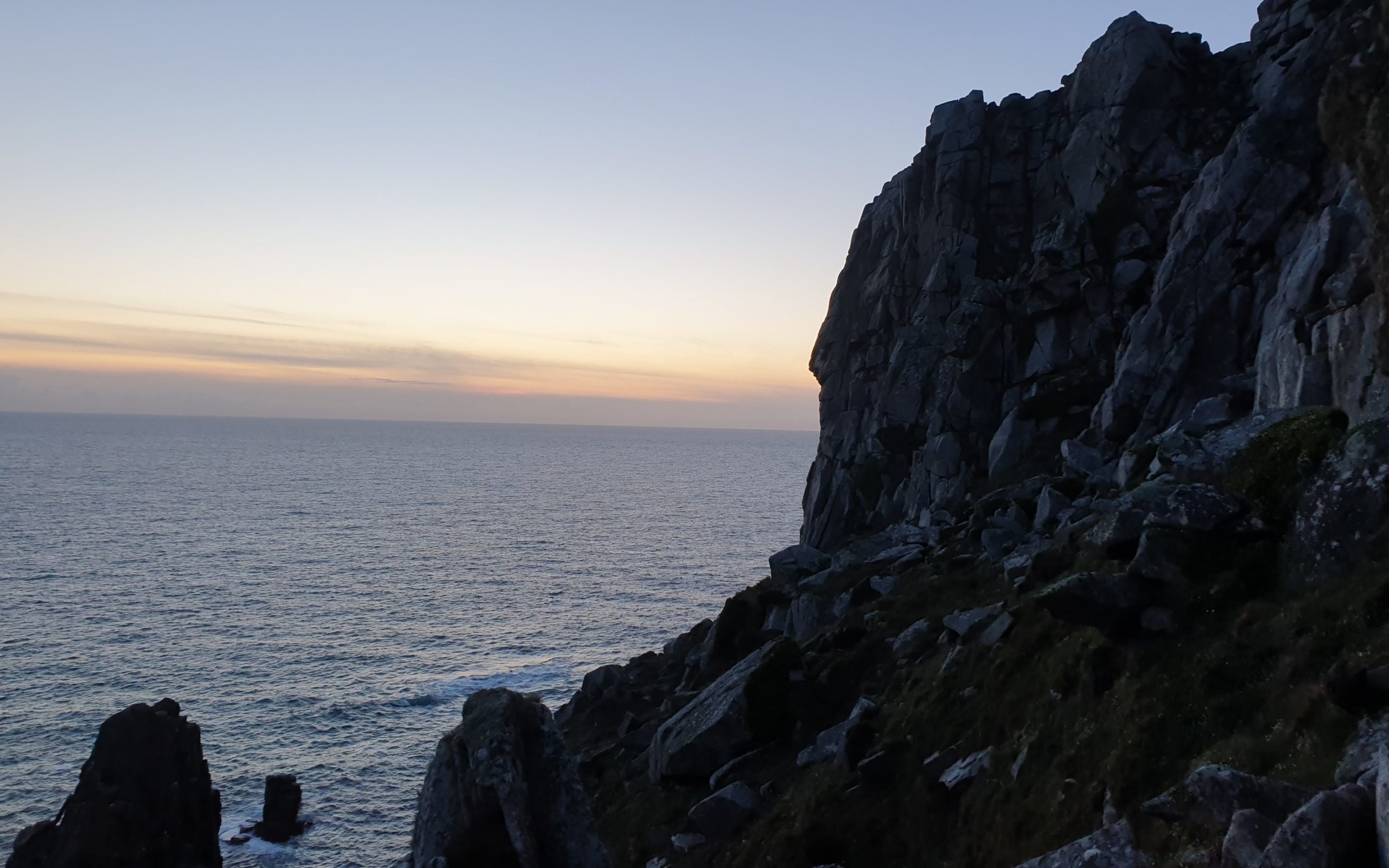 For the first time this year the campsites were open and we could get away as a group, and where better to go than the mecca of traditional climbing than West Penwith in Cornwall.

Despite an unfavourable weather forecast, we headed down on the Friday, I was free of work so went down in the morning, with the others turning up that evening. Driving down the weather was terrible, but as soon as I got to Cornwall, the good Cornish gods looked down on me and the roads were dry.

The Camping was at St Just Rugby ground, so after checking in, I decided to go to Carn Kenidjack to see if I could self line some routes. Despite high winds and sea spray, all the routes in the zawn were quickly dispatched. Once back at the safety of the van, messages appeared from Julian and Anne, who had booked us a table at the local pub in Pendeen for a very welcome evening meal.

Later that evening Laura, Kieran and Robin arrived, and we spent some time sampling the delights of the extremely good value Rugby club bar on a Friday night.

Despite the questionable weather forecast, Saturday turned out to be a smashingly awesome day, with sun on the granite all daylong. Seeing this when we woke, I armed myself with double pasties, we headed off for an all day assault on Bosigran.

As it was a first time visit for Laura and Kieran, I saw it a responsibility to make sure they got the best of classic granite, so started off with Doorpost, whilst Robin lead Julian up Ledge Climb.

With the Doorpost experience in the bag, we stepped up the grade and went for the other Bosigran classic of Little Brown Jug, Whilst Robin and Julian made short work of The Doorway.

Little Brown Jug has always been a favourite of mine. Having first climbed it as a child with my father, I have returned many times over the years, and no other route gives me more of a feeling of “belonging” as this one does. Climbed as 2 pitches, with the start heading up a line of flakes in the slab, then across the one above to land on the Ledge Climb belay blocks. The second pitch is where all the action happens, pulling boldly off the belay into the steep wall above, the crux (now without the peg) is an interesting layaway to palm off move leading to one of the best jug holds you can imagine. The top wall section to finish is super exposed, but not technically very hard.

After a well earnt pasty, it was decided that Laura and Kieran should do their first trad leads. As the granite at Bosigran is easy to protect and there is a good number of routes in the lower grades, its the ideal venue to learn how to do it.

It was now Robins turn to pick a route and his choice was the classic and at times bold line of Zigzag (VS), whilst I held his ropes. A delight of a route, but one that must not be underestimated.

With the day coming to an end, Robin asked me if there was anything else I wanted to do, and after seeing a team on it earlier, I was thinking I would like to lead up Visions of Joanna (E1). With its steep start pitch and an unfortunate stuck nut (well done for getting it out Robin), we moved on to the second pitch as the sun was setting. Lightening fast rope coiling at the top and descent allowed us to perfectly time leaving the cliff as it got dark. And to another evening at the Rugby Club bar.

The next morning forecast the weather closing in, so we decided to make the most of it, and headed off to Zennor. Although a bit damp, we went for an adventurous ascent of 1923 Route (VD), a historical large chimney route up the centre of the cliff, before weather stopped play.