The AMC held a trip to the Isle of Skye from 27 May to 2nd June 2021, based at the ideallic Glenbrittle Campsite.

Diary
Day one (28th May).
Rich, Owen, Peter and Paul arrived the night before. Jamie, Lisa, James and Emma arrived around 10am after an overnight drive. The others were already raring to go while we pitched our tents with bleary eyes.

Emma, Peter, Jamie and Lisa headed up the great stone shoot to the col between Sgurr Thearlach and Sgurr Mhicconnich then dropped over to Sgurr Coire nan Lochain for 360 views of the cuillin above the coruisk basin. Lisa found a hitherto unknown love of scree. 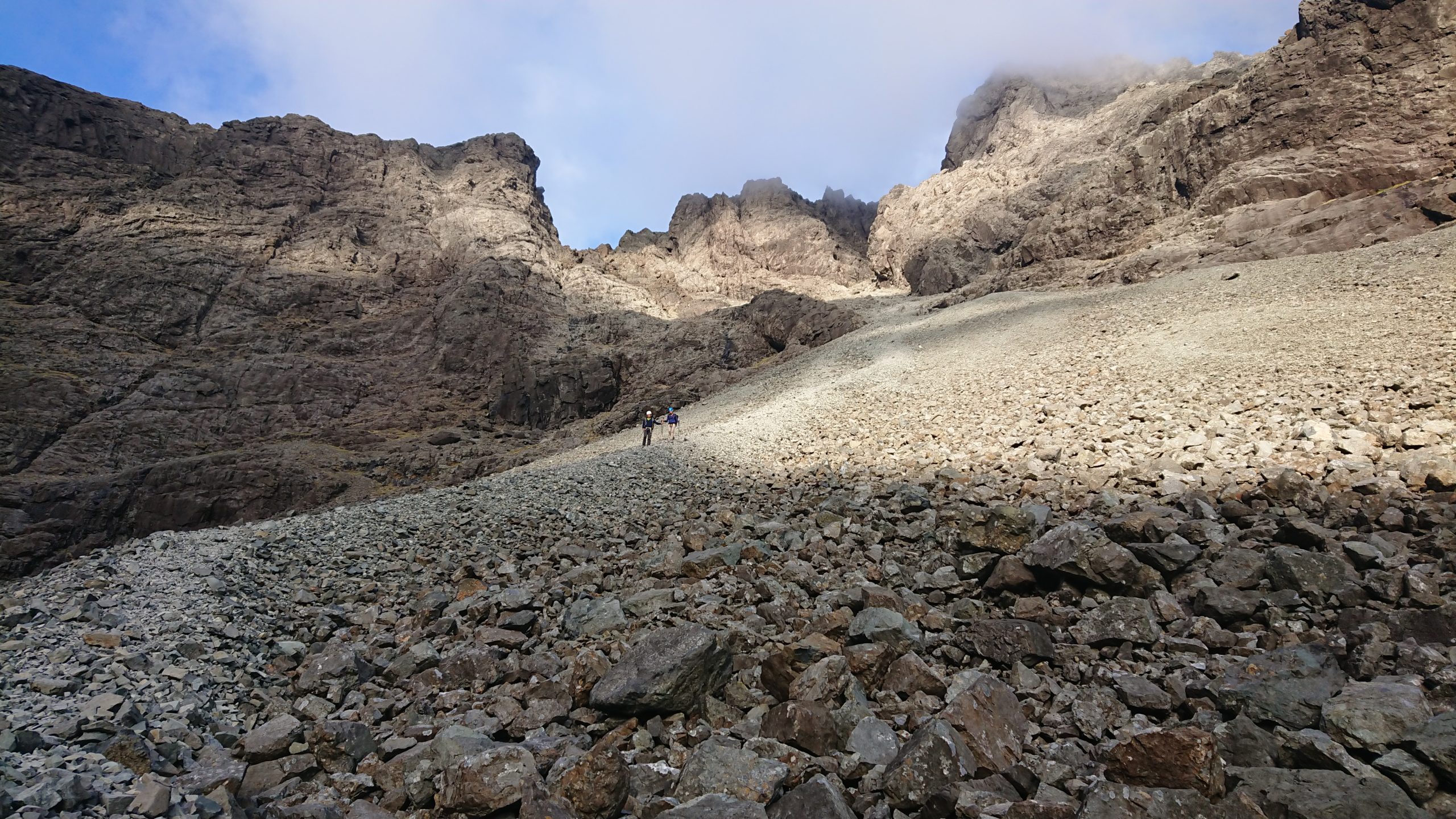 Lisa’s enthusiasm was so much that one of her boots had to have running repairs with gaffer tape.

Rich, James, Owen and Paul headed up the An Stac screes and climbed the Inn pinn via a HVD route on the south face.

Everyone got down for dinner together at the camp site, the wind rose and kept the midges at bay.

Day two
Emma, Paul and Owen did the Thuilm ridge on Sgurr a Mhadaidh a classic scramble, including one pitch of mod and had a dip in some pools on the way down. 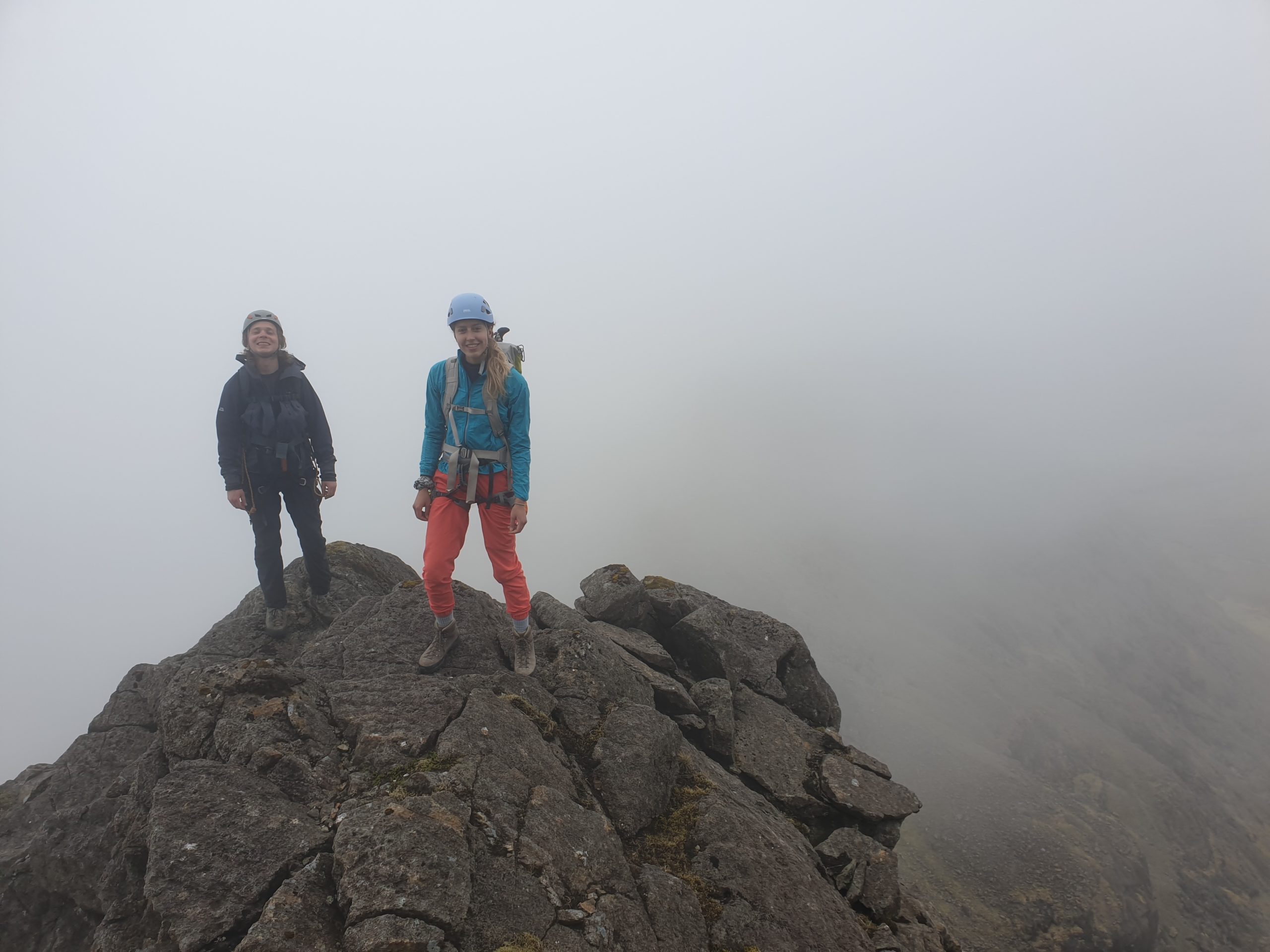 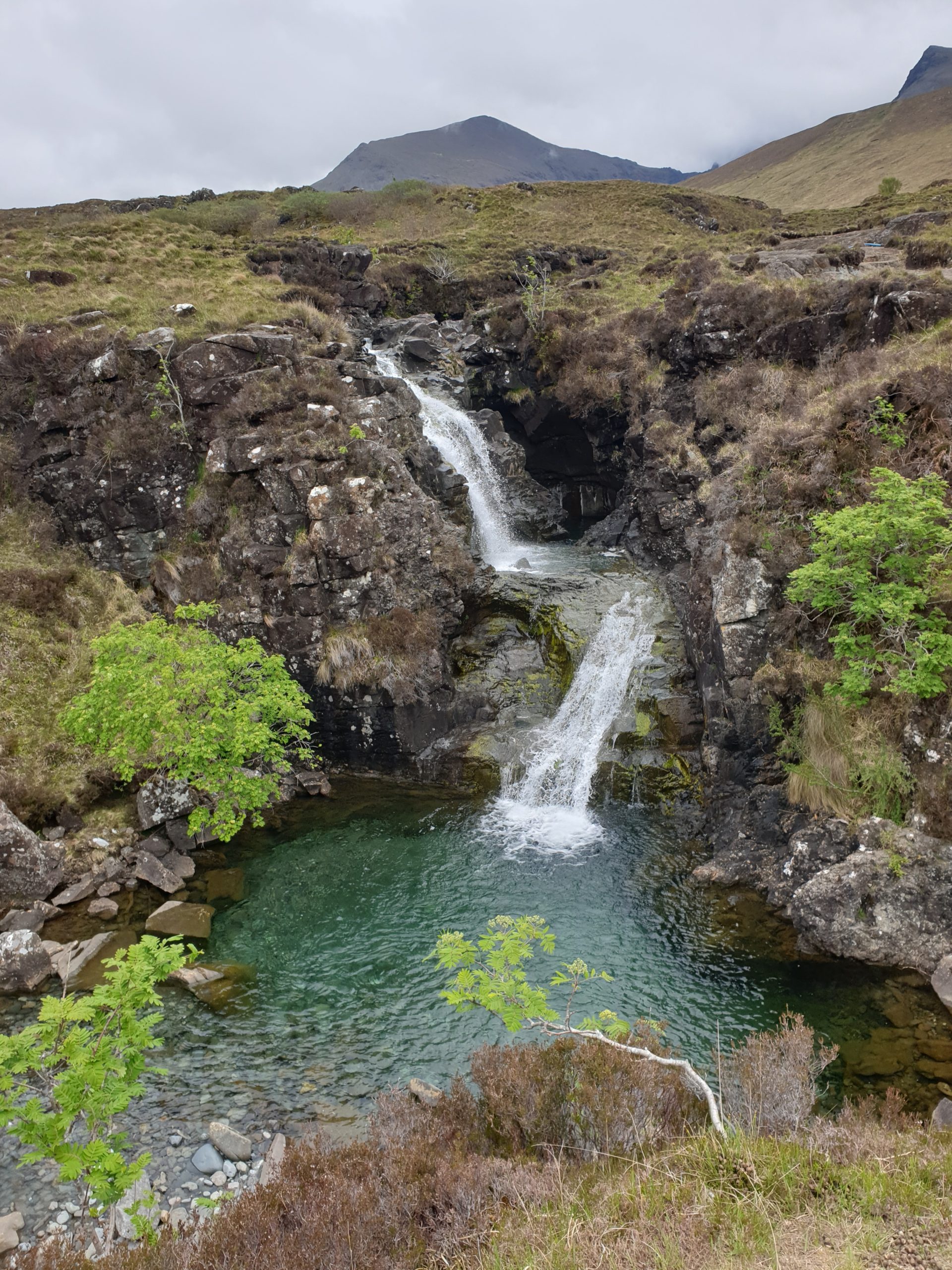 Rich and James tackled little gully on sron na ciche which turned out to be a waterfall. James having to do a memorable double foot jam in the wet.

Jamie, Peter and Lisa climbed Cioch west S, after nearly heading up the damp HVS next door. My bad.

We then cut across to do uber classic Arrow Route up to the Cioch itself. 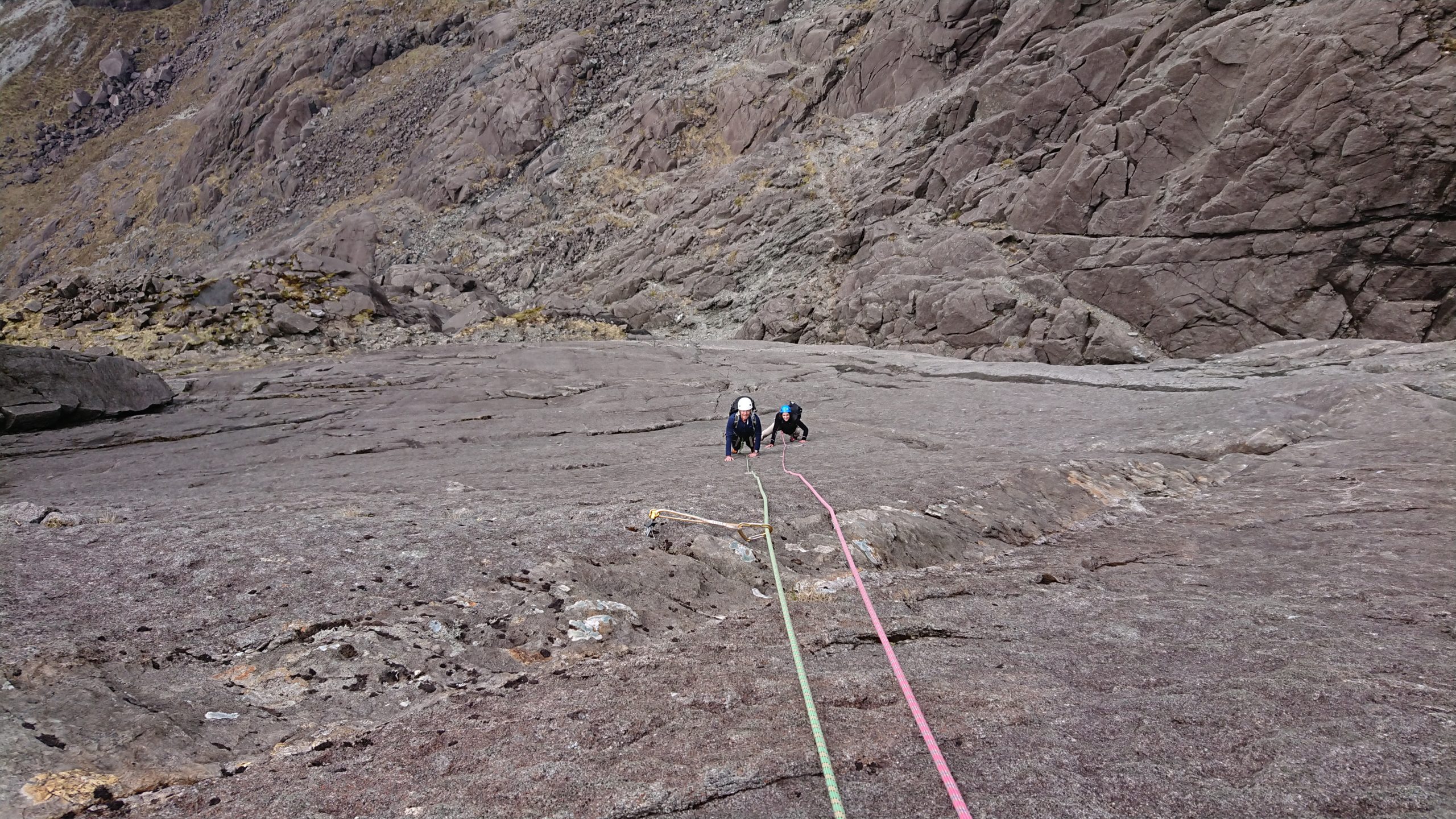 After the obligatory photo with the plastic swords on the Cioch we continued up Wallworks route VD then Yanks S before walking down the shoulder of Sron na ciche to complete a very long day. 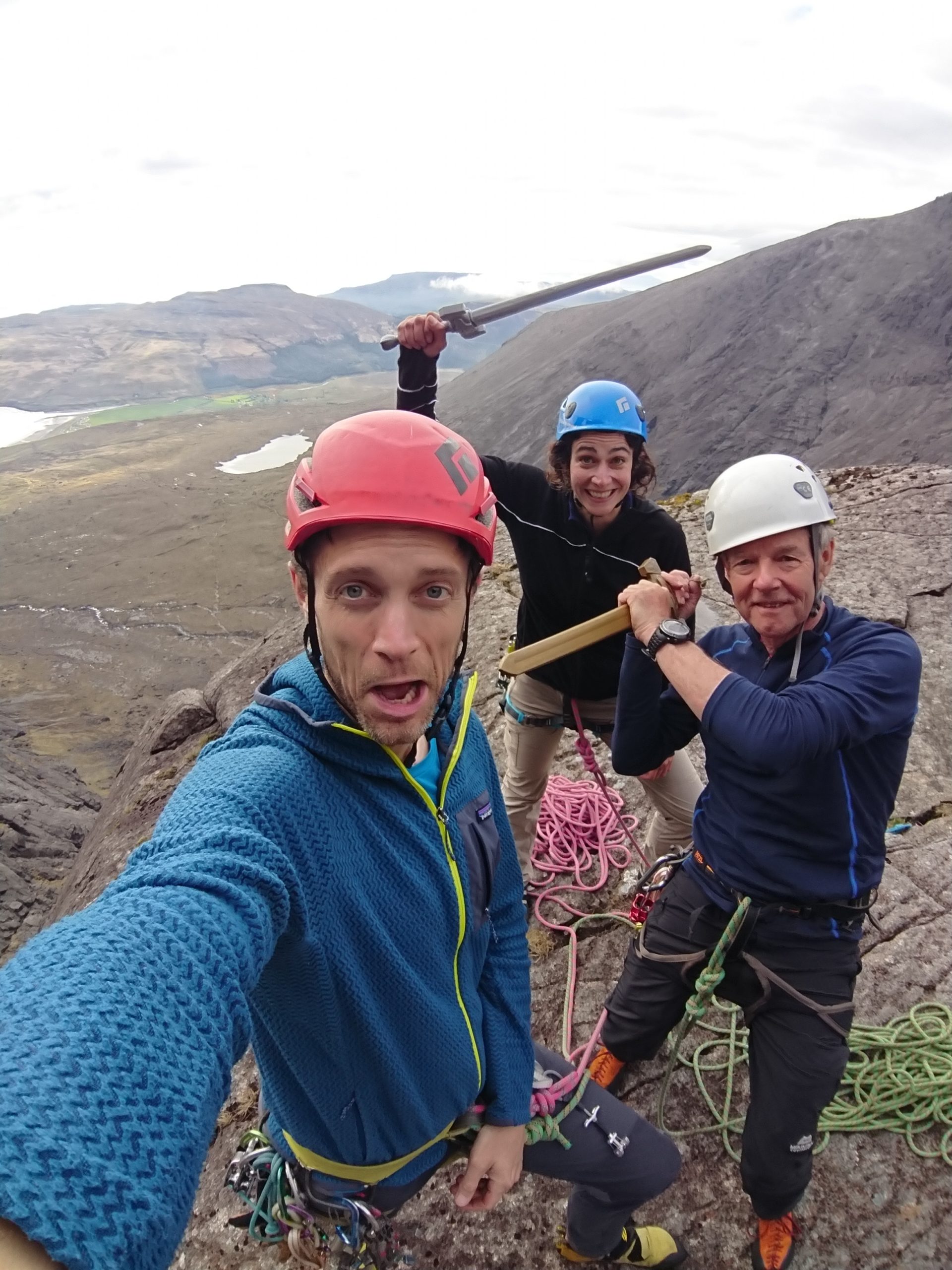 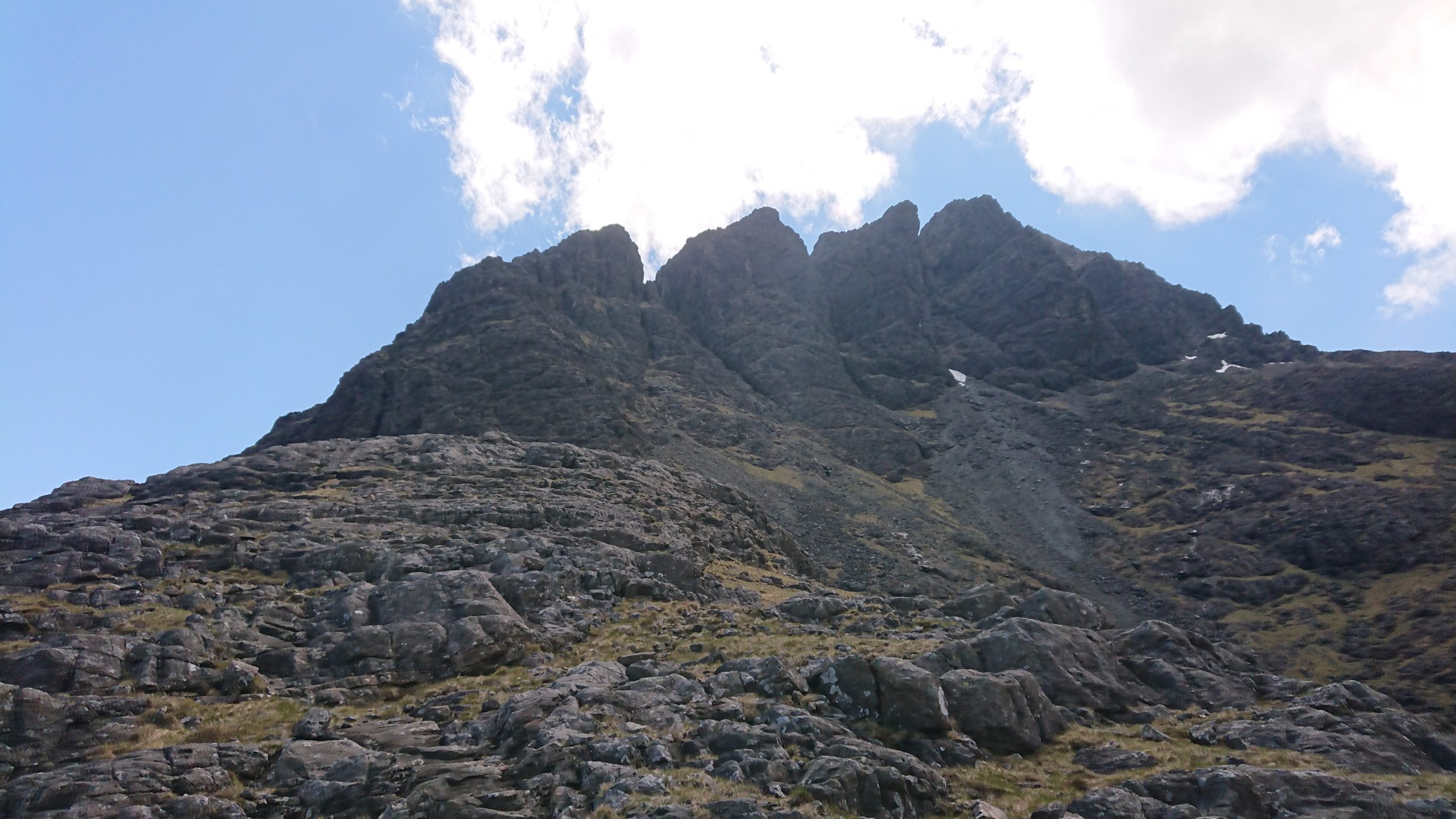 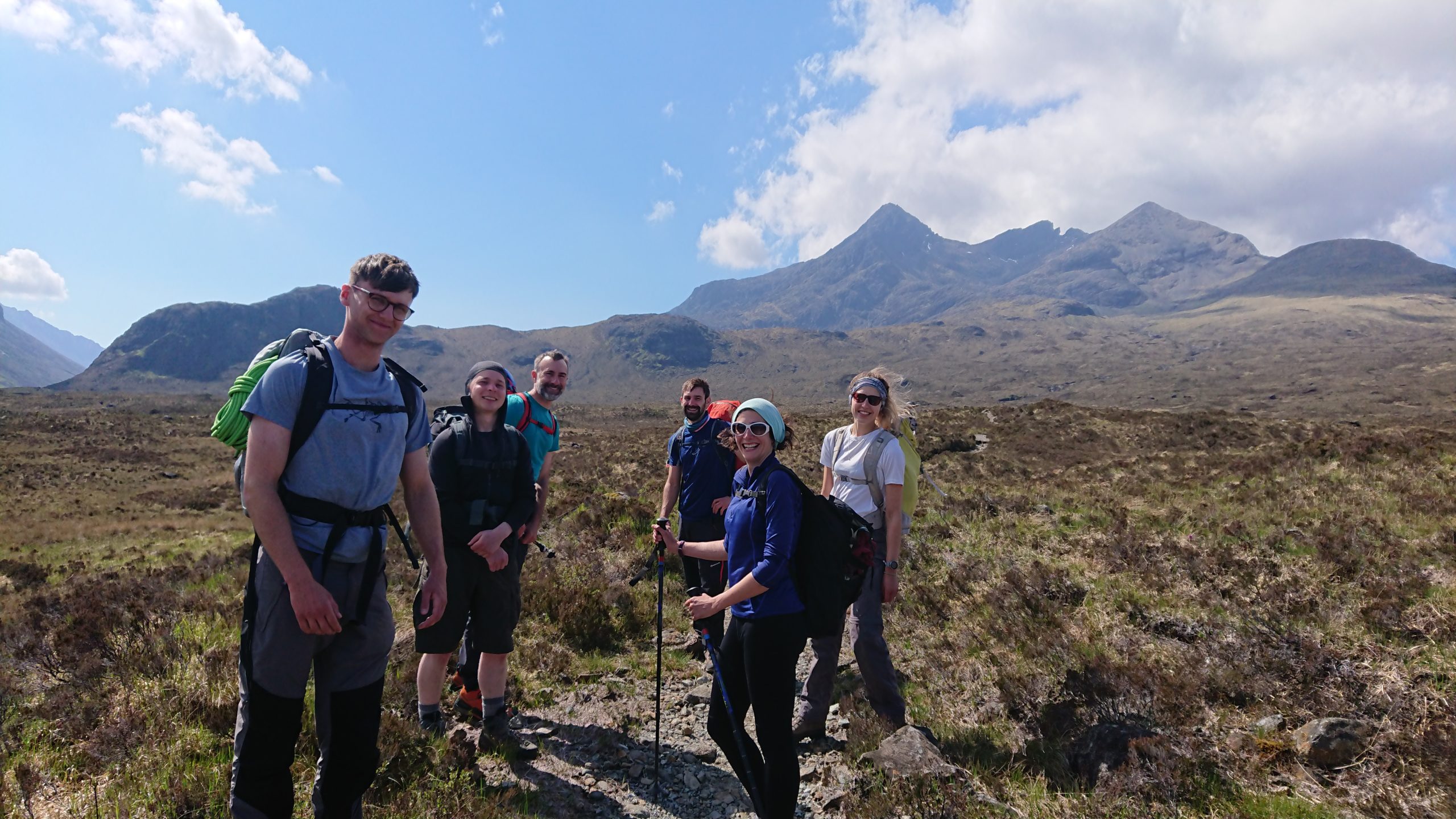 Everyone drove from Glenbrittle to the Sligachan pub to begin the walk in.
Lisa decided it was too hot so took an unplanned early dip in a pool while we all stopped for a drink. 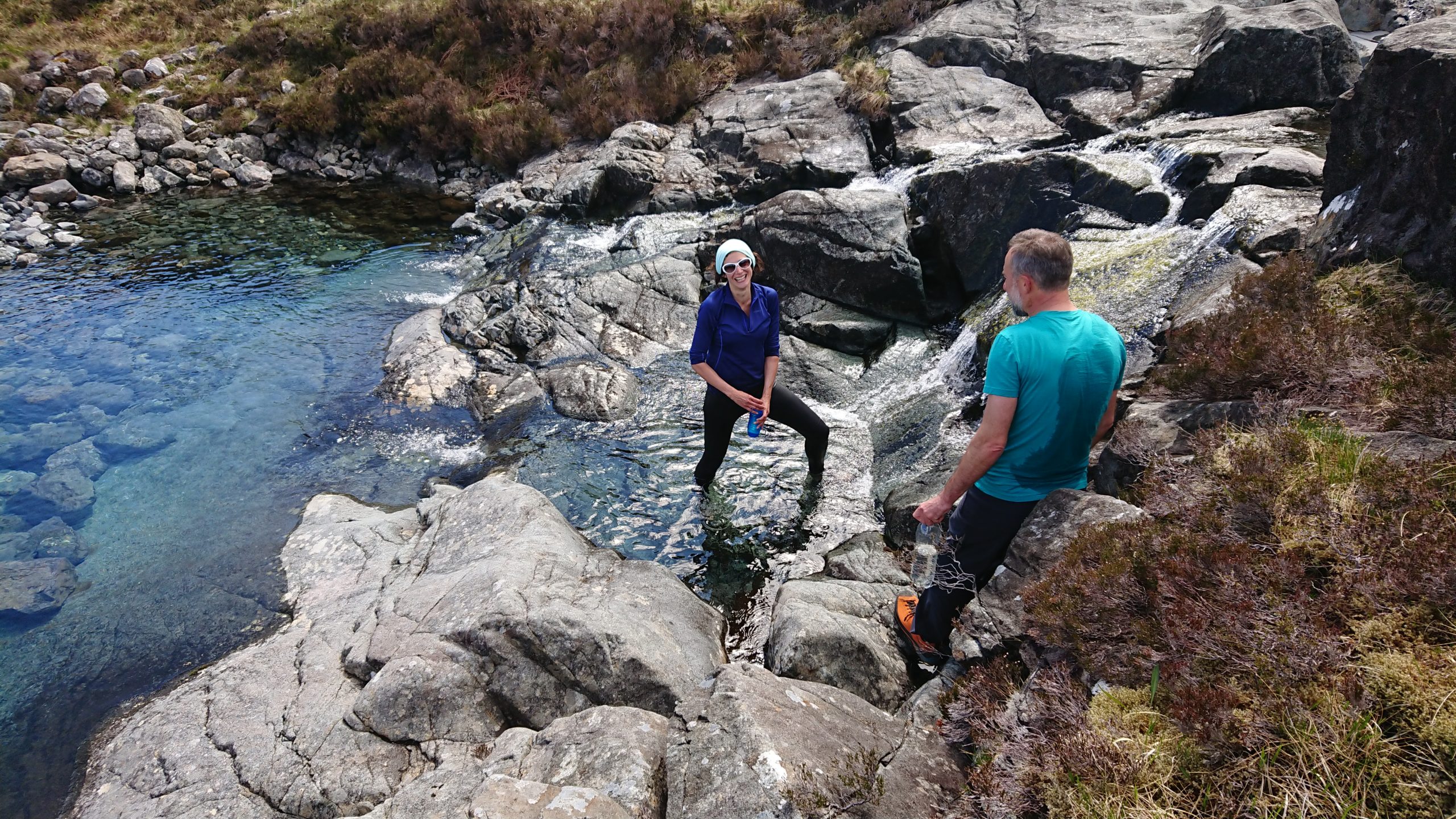 Between the group Paul loaned some dry waterproof trousers and Emma some dry socks and Lisa carried on totally unfazed. An example of the team spirit that really made this trip.

Rich and James moved as a pair alongside Emma and Owen. All four soloed the route apart from one abseil on the way up then a second abseil while descending the west ridge. 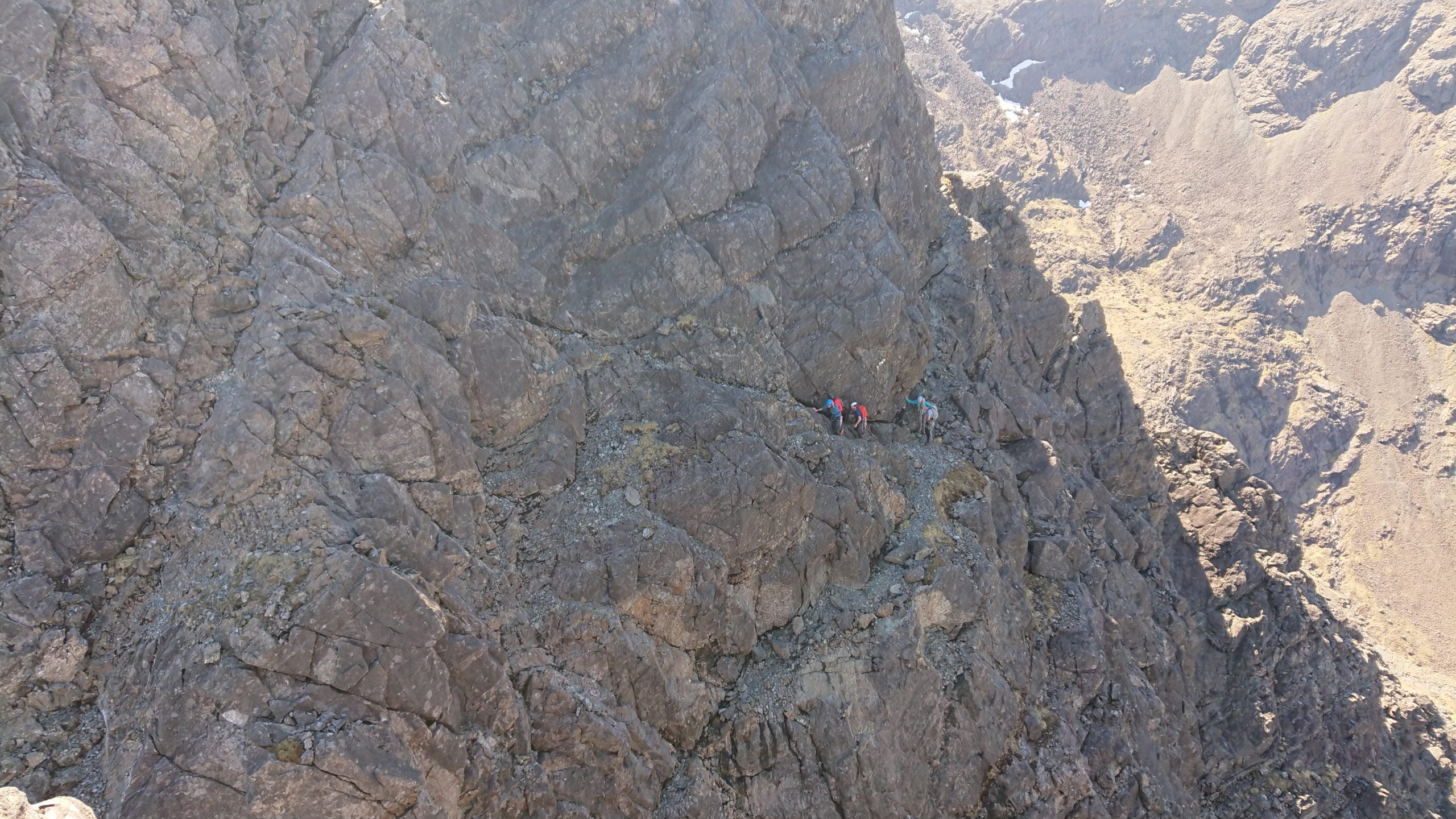 The dream team then went for another swim on the way down before making it to the Sligachan pub for food. James, delirious from fatigue decided a goose was a penguin.

Meanwhile back on the ridge moving more cautiously Jamie led Lisa and Paul short roping the route and descending the south west ridge. 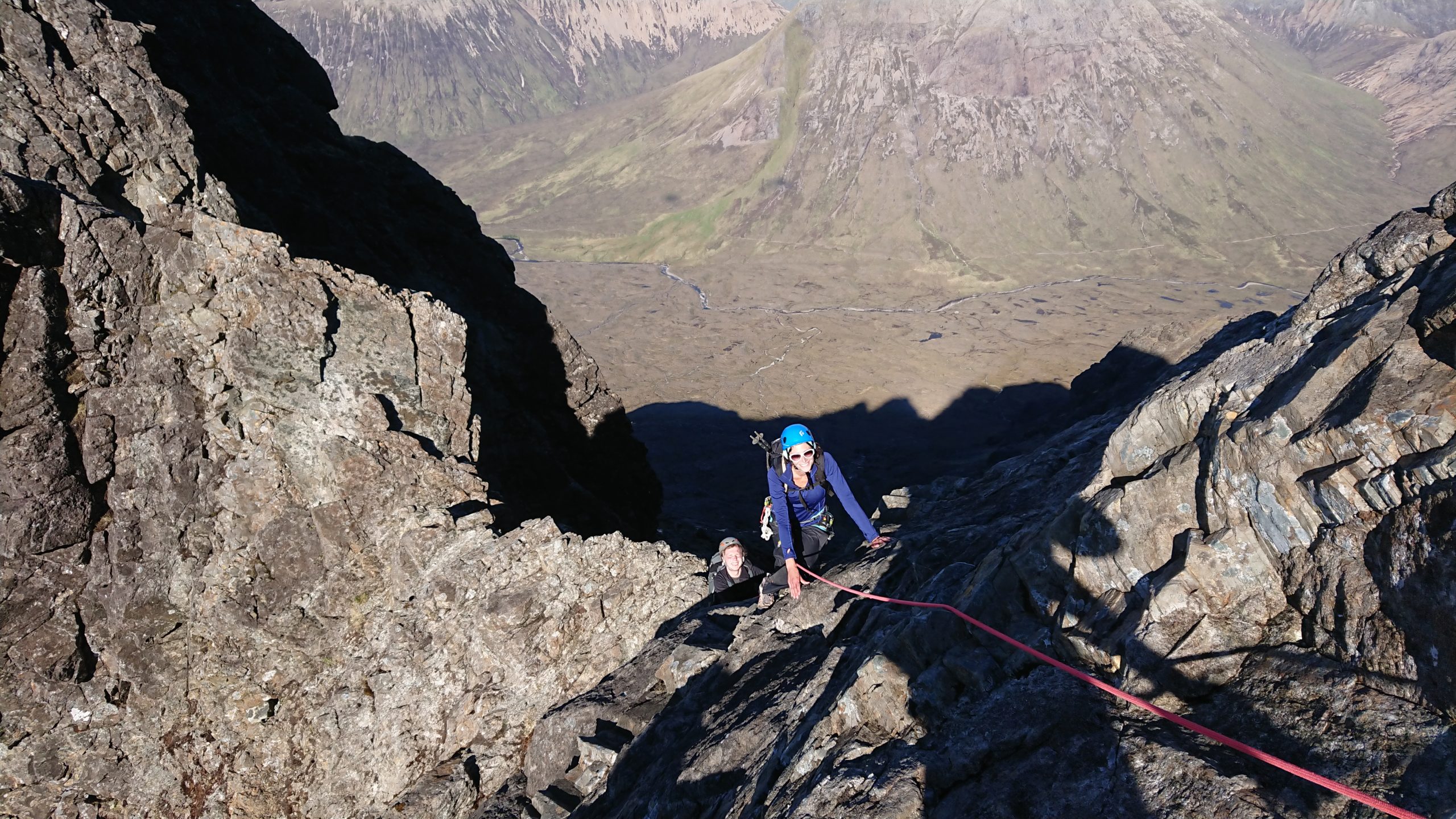 After a long walk with the pub in the distance we made it down for last orders, crisps and a left over donut. Still in need of carbs we went for a curry in Portree, eaten in the car to escape the midges. And yes it turned out that peshwari naan was perfect hill food the next day. A chilled start in camp, yet another posh coffee from the on site barista😊

Staffin Slips is one of the UK’s best cack climbing venues, and possibly one of our best crags in my opinion. Recently cleaned and tidied by a local enthusiast. 40+metres of plumb vertical granite, a jammers paradise! Routes ticked all round and back to the pub for dinner and plans for the next day.

The biggest day of the trip. We woke up early (so before 10am😳) to get a taxi round to Elgol for the boat into Loch Coruisk. The plan was to climb the Dubh slabs then on up and over Sgurr Dhu Morr, drop down the western side via Coire a Ghrunnda then walk back to the camp site at Glenbrittle. With the early start and no return boat to catch we just relaxed and explored the route playing around padding up huge waves of super grippy gabbro. Words don’t really do the day justice. We took hundreds of photos, which should be accessible by a link at the bottom of this article.

On the way down we took a chilly dip in Loch an Ghrunnda, the highest lake in the UK. Then picked our way down enormous smooth glaciated slabs which faded out to the Glenbrittle path. Day six
Back up to Sron na ciche before heading home.

James and I headed for another link up, fewer pitches this time but harder routes, Petronella into Arrow Route, a classic Rock tick for James.

We were aiming for the 4 star VS integrity but a queue had formed so we stepped right to do trophy crack instead.

Meanwhile Rich Emma and Lisa headed up little gully and met us at the Cioch. One more sword photo for the album😁 With all the good weather maybe we’d exhausted the good karma 😥 my ropes got stuck and couldn’t be safely retrieved (note, if you do a pull test before everyone descends you could avoid this – ask me in the pub to explain) we got down late for our planned overnight drive and then to cap it all off I had to scrap my car in Dumbarton (I can laugh about it now, it was his time) throughout the trip though everyone pulled together and helped each other out, the set backs were part of the adventure (and there weren’t many setbacks any way.)

P. S here’s a link to all our photos