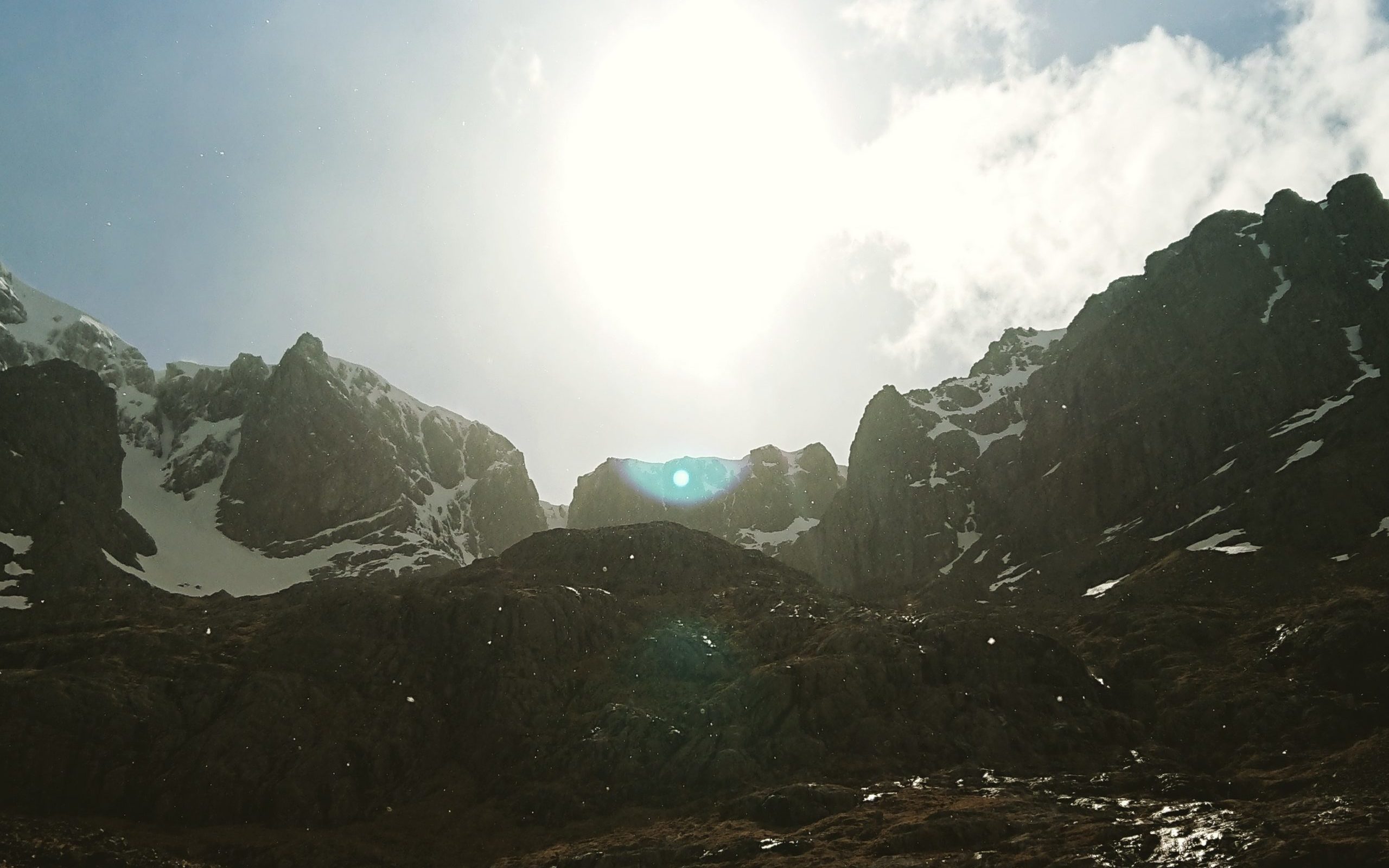 The Scottish border opened for leisure last Monday. The Saturday before, after a week of nights, I found the stars had aligned 😀 a good forecast, routes still being ticked on social media and a keen fit climbing partner ready to go.

We left Bristol around 9pm on Sunday, hit cruise control, stopped for the obligatory irn bru and at 7.30am were sorting kit in the North Face Car park.

Usually the Charles Inglis Clark (CIC) hut under the North Face is a comfortable place to stay, but sadly this was still closed due to covid. That meant an uncomfortable 2 hour walk in carrying a weeks camping gear, made much more difficult by soft lock down shoulders and legs.

Eventually we pitched our camp slightly above the hut near a stream and had a glorious nap. The weeks forecast was only small amounts of precipitation, even so we had to shelter from the rain and move our tents at least once to avoid fresh flood not soaking in to the dry ground. Winds were at 45+mph so we decided to pass the time by walking in to Tower gully and coire na ciste to recce the ice routes. Crampons on and axe in hand for the first time in almost two years!

The classic grade V ice routes Hadrians wall and Point Five gully looked in good condition. We’d done enough to chalk the day up as a win so retreated to the tents and had a long sleep ready for the next day.

Day 2, still high winds and bands of showers, mostly snow and hail. Realistically we wanted a warm up so aimed for Green gully on the comb, a 185m gully line that went around a sustained grade IV, plus we hadn’t done it before. This turned out to be the route of the week for me, the angle was comfortable but interesting all the way to the small cornice, icescrews went in where needed and there were good rock belays.

Next how to get down? We turned right and hand railed the edge in the poor visibility, walking in parallel with the rope still on in case Alex went through the cornice (he’s lighter than me).

Number three gully was the first option but this turned out to have a massive drooping cornice so we plodded on to number four, a classic way up the Ben in its own right. We met two guys at the cairn who had just come up checking out the gully as a ski decent! Turned out one of them was from Bristol as well!

Number four had a short section of downclimbing at the top then an easy snow plod facing out. We got back to our tents and started the weeks daily tradition of soup and bread in the afternoon.

4G at our camp site meant we could check the forecast every day. The week was improving, starting cold, winds and precip were dropping, time to go big.

Day 3 we started early, had tent tea and headed up to the base of point five gully. Point five was still being swept with large amounts of spin drift so we hopped across to Hadrians wall instead. We had four fantastic ice pitches with good belays in the lower half, then the route eases off to a long gully system. Our lockdown calves struggled as we kicked our way to the top, not helped by sugary snow and technical crampons.

We’d had ideas to loop round via Tower gully and try to do point five as well that day. Thoughts of the same slog up the top section on point five quickly stopped that idea in its tracks. A quick summit photo and then we swung round to number four again. The same skiers were there! this time they’d brought skis and we got to watch as they carefully stepped down over the cornice and slid down into the gully. 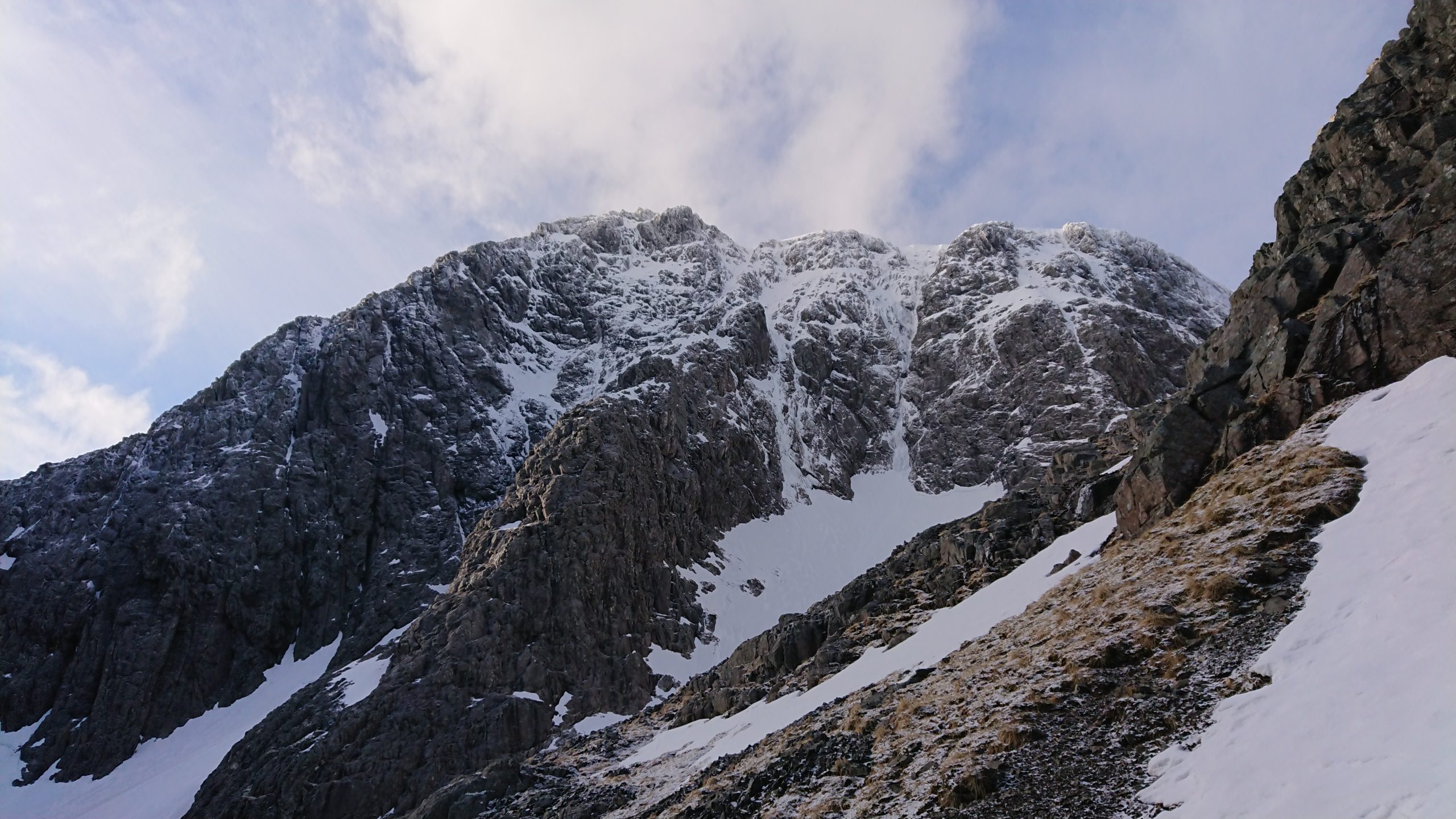 Hadrians wall the ice fall on the left and point five gully on the right. 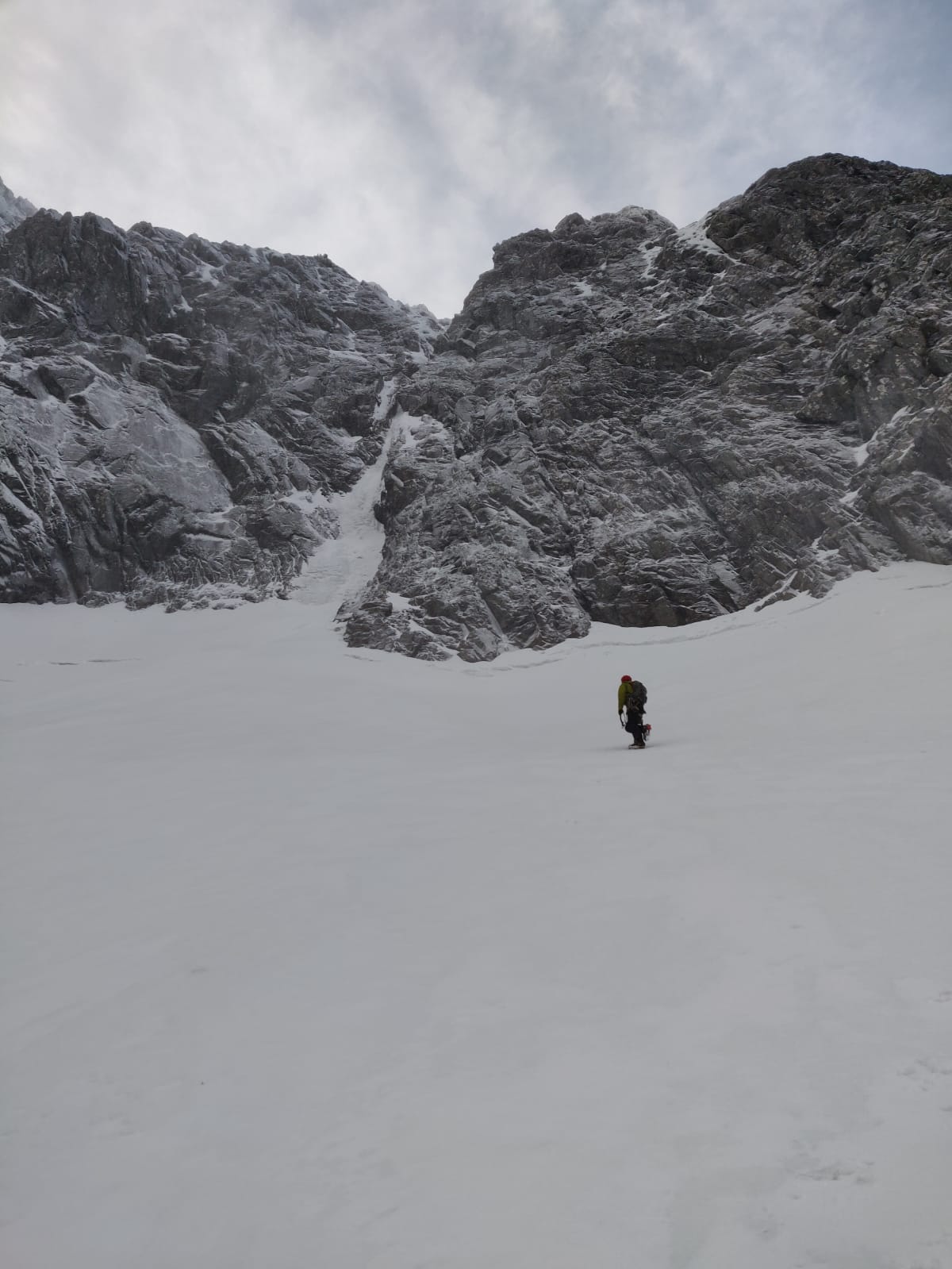 Having a wee look at point five. Not to be. 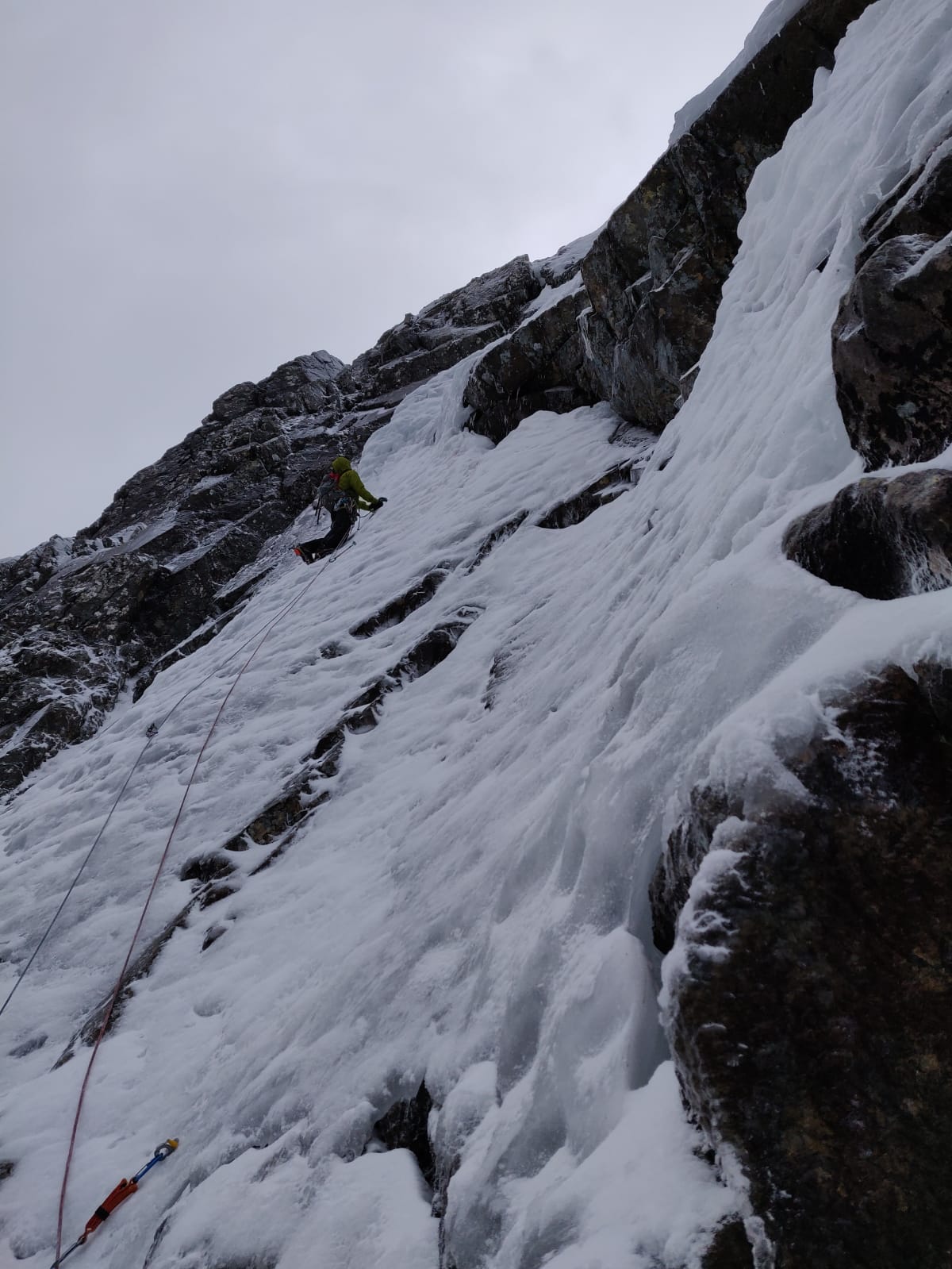 Day four. We were both really feeling it in the tops of our calves from the day before so mulled over doing something different. Why not the best route on the mountain Tower Ridge!

We kicked steps up the easy gully to the Douglas gap and started the route without crampons, at the little tower the route took on its full winter feel and the axes came out. The Eastern traverse and Tower gap proved fun as always and I even got to place a meaningful ice screw on the final pitch. Still one of my favourite routes. 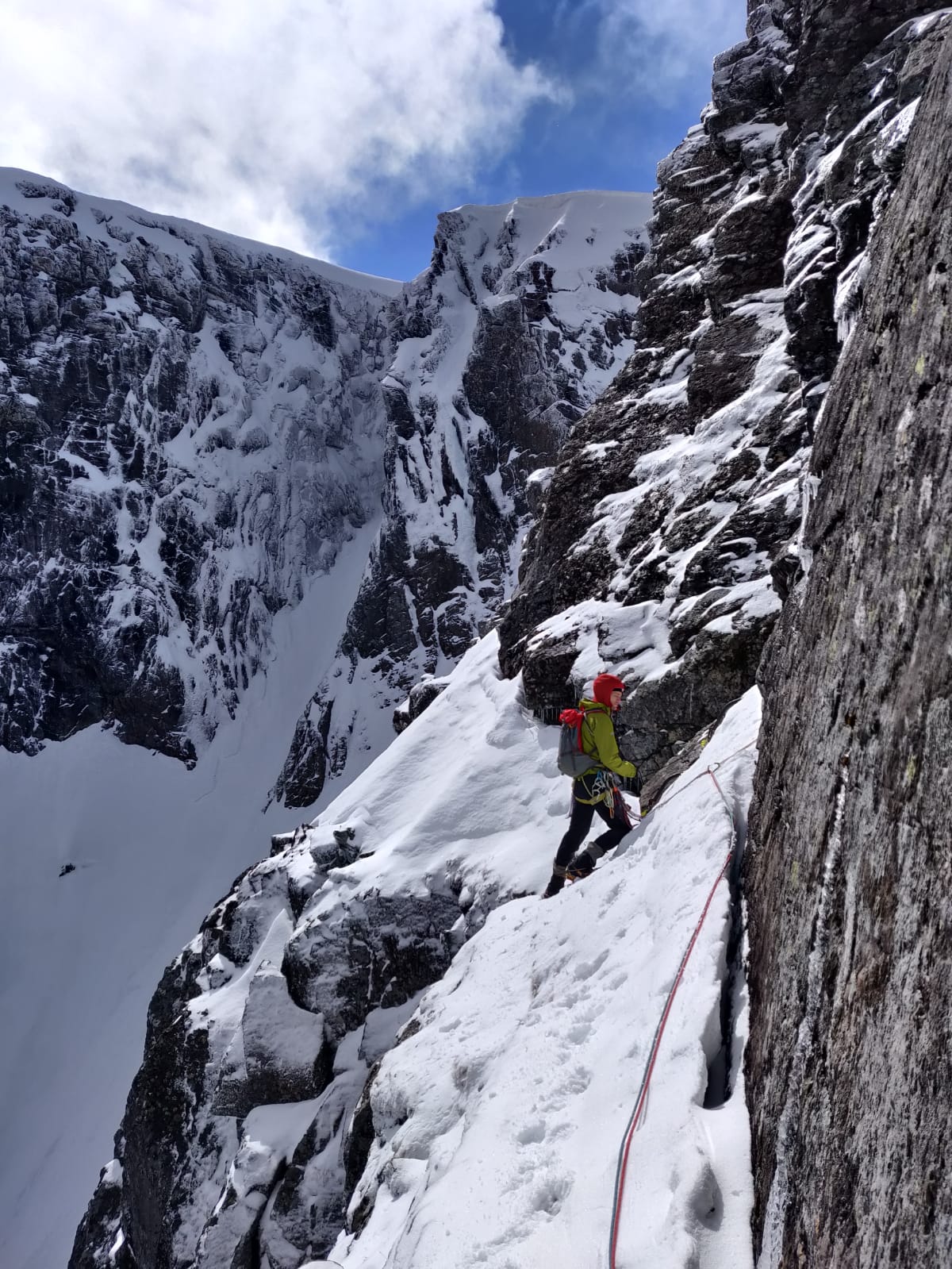 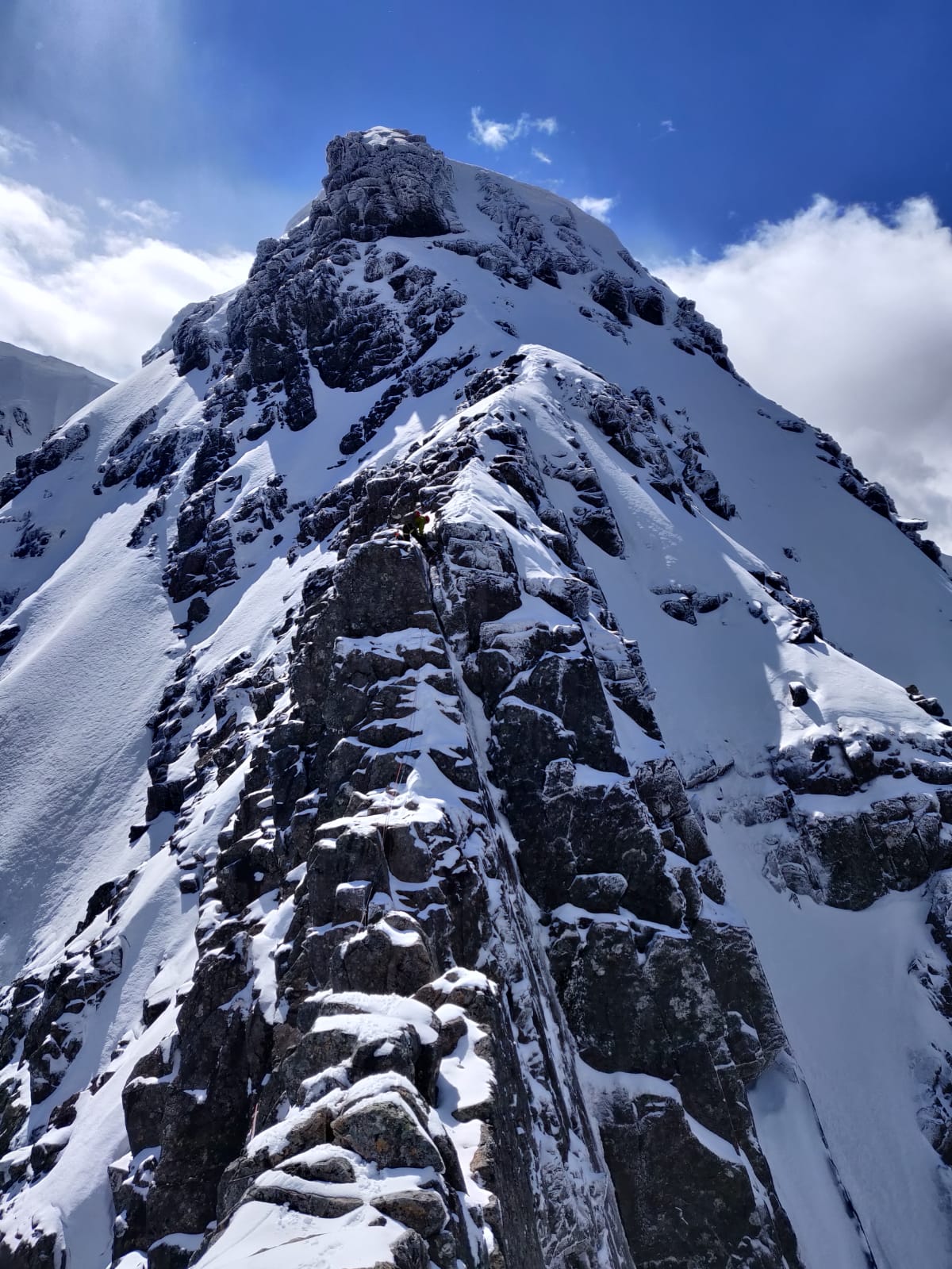 Looking across Tower gap at the final section.

To round the day out as a mountain adventure we decided to turn left at the top and head down towards the CMD arete then descend into the snow bowl at the top of Coire Leis. 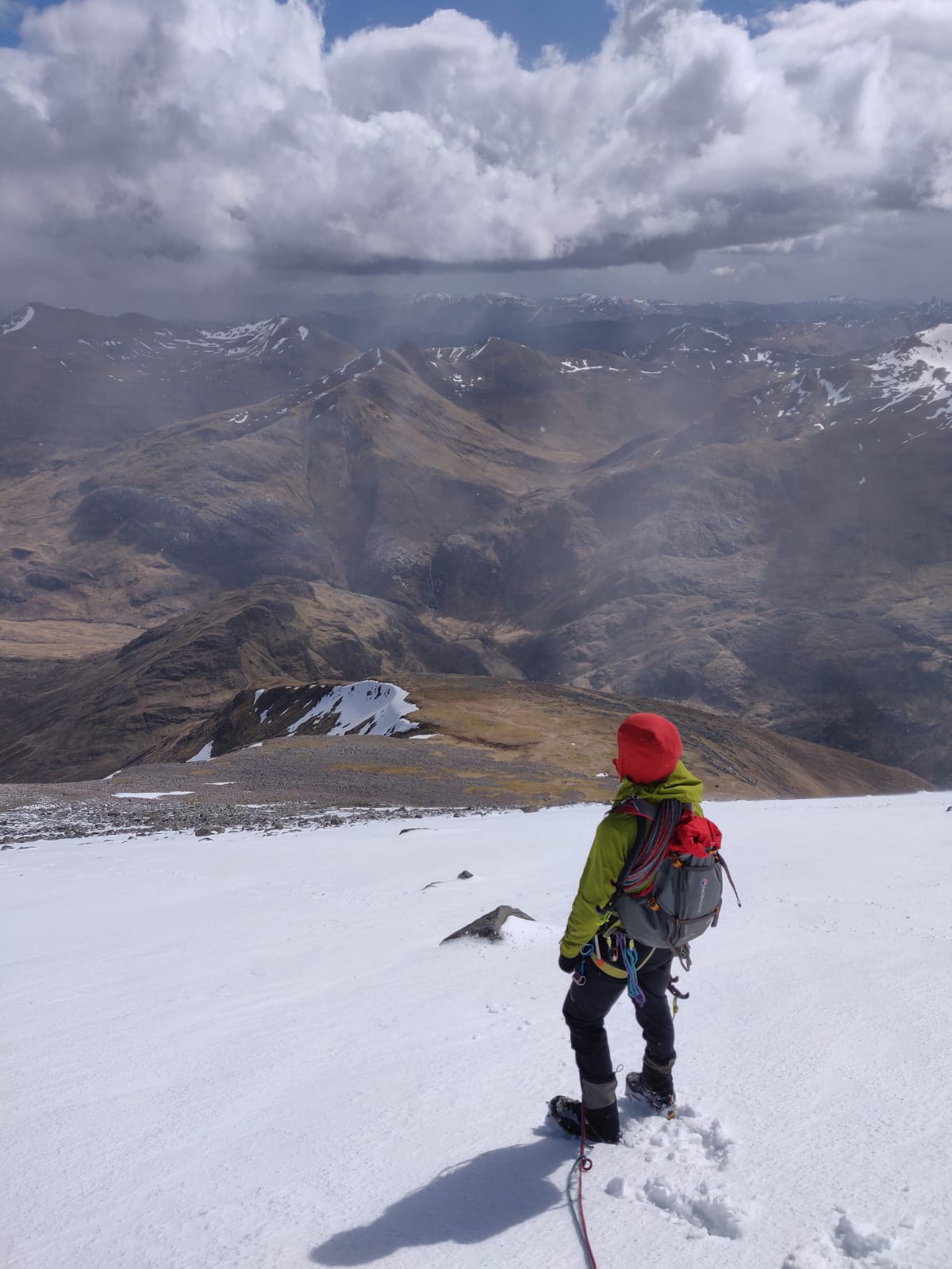 The walk back to the tents in the sun over granite slabs and past trickling streams had a whiff of the alps about it.

After some careful thought we decided to aim for Comb Gully on the opposite side of the comb from Green Gully, a popular route which we hadn’t done before. Slightly shorter than comb gully but with some steeper sections.

We didn’t rush the walk in up Coire na ciste and soaked up the atmosphere. 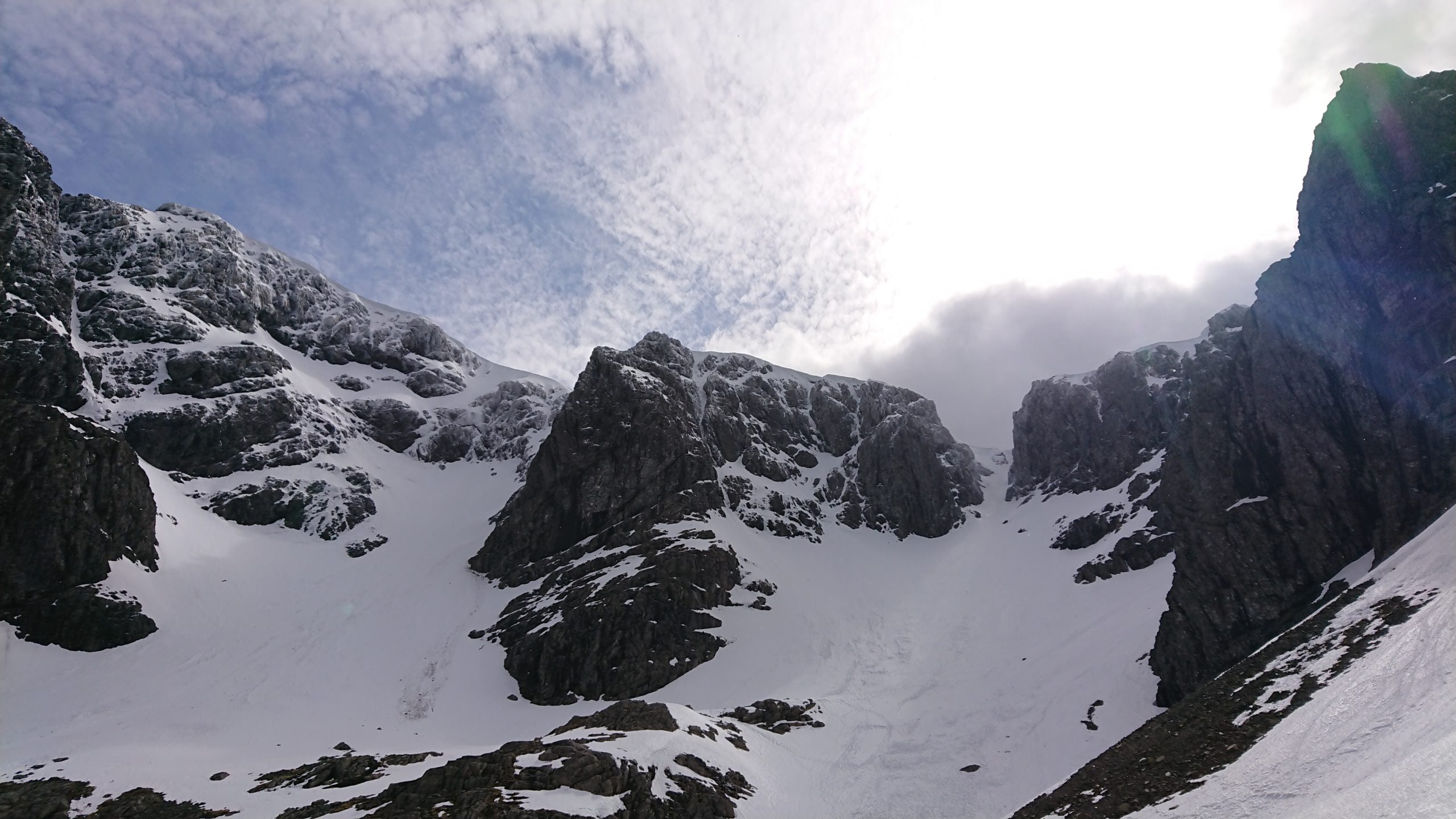 The route itself was as good as promised, with only one thin section by the cave pitch. The downside to the sunny weather was being pelted with melting ice from the face above. All the belays were sheltered though and we knew there wasnt a cornice from looking in on day two. 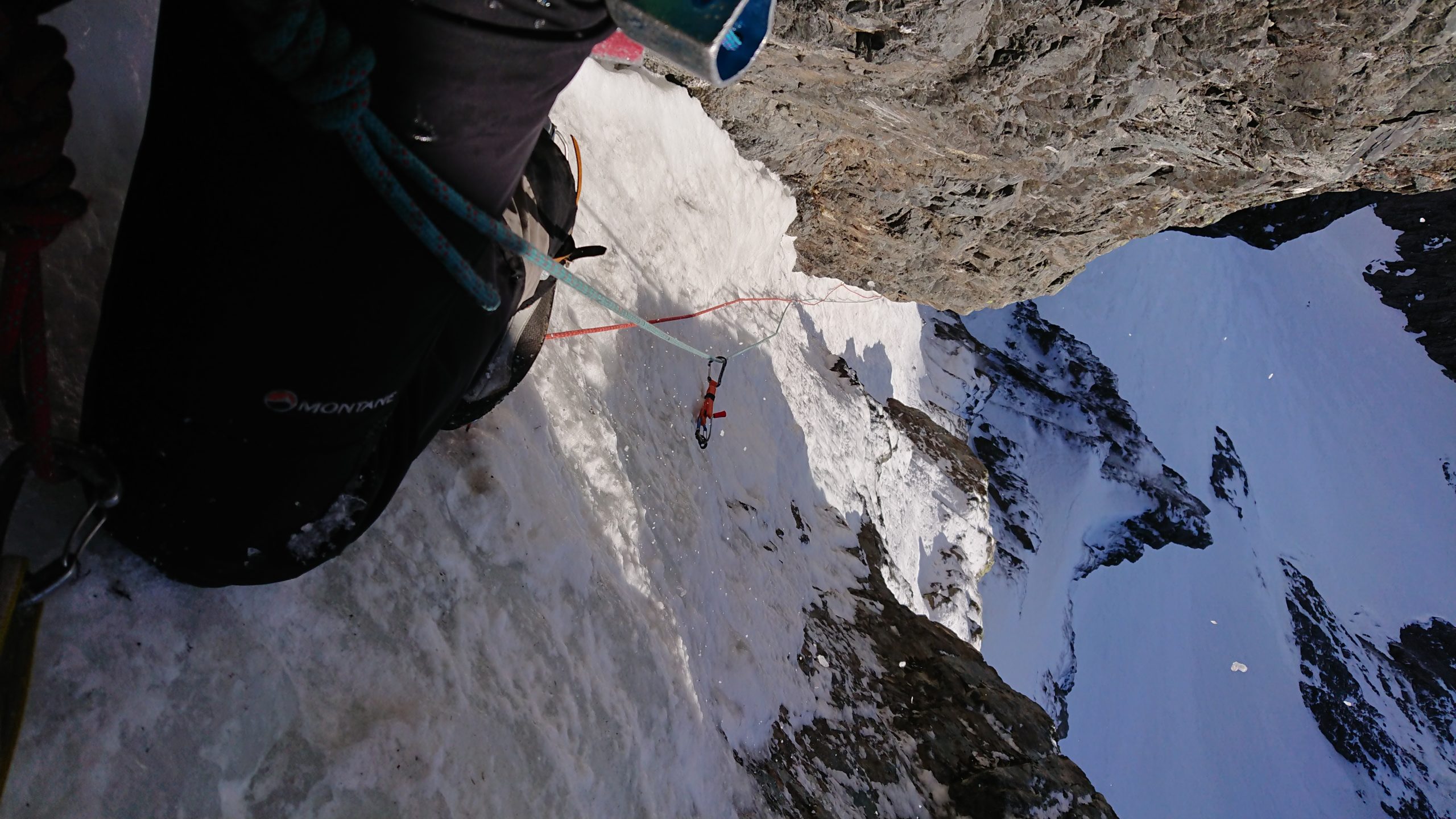 Looking down green gully, in cover at this point. 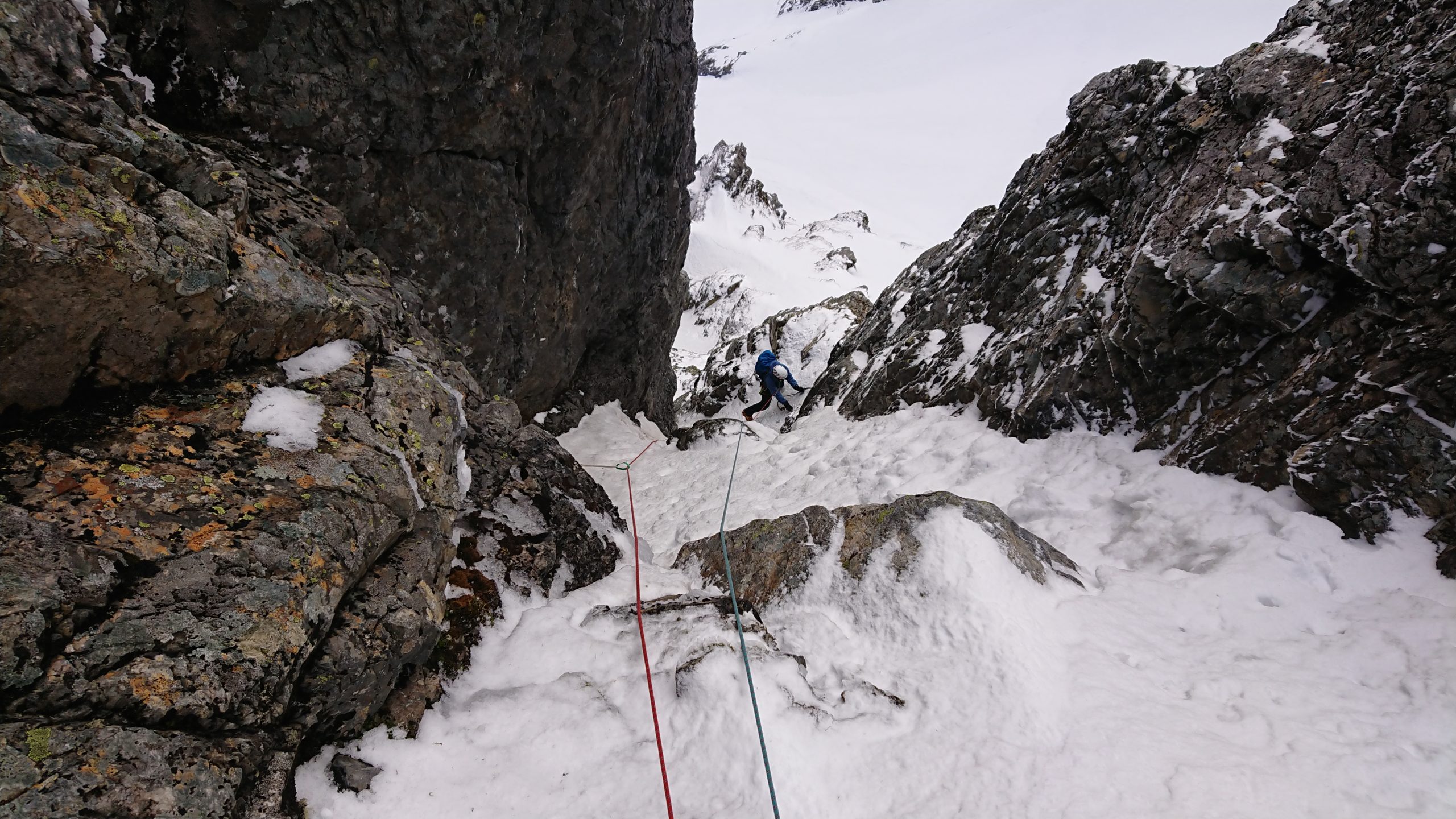 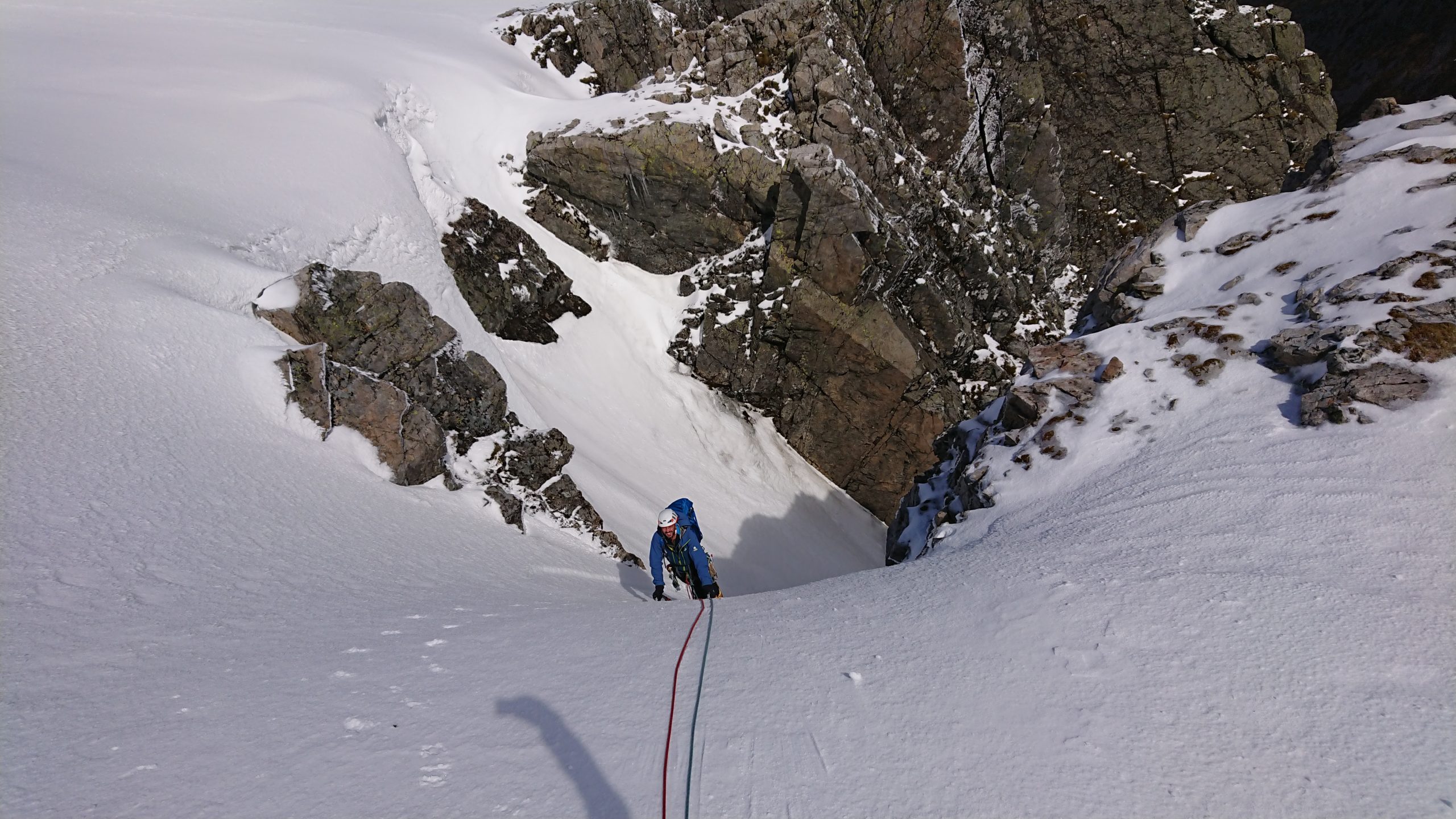 We knew number four gully pretty well by now so decided to mix things up and descend ledge route. We could see this was in winter condition in the upper half but dry below. The bad step slab had rivelets of ice which made it feel quite spicy. 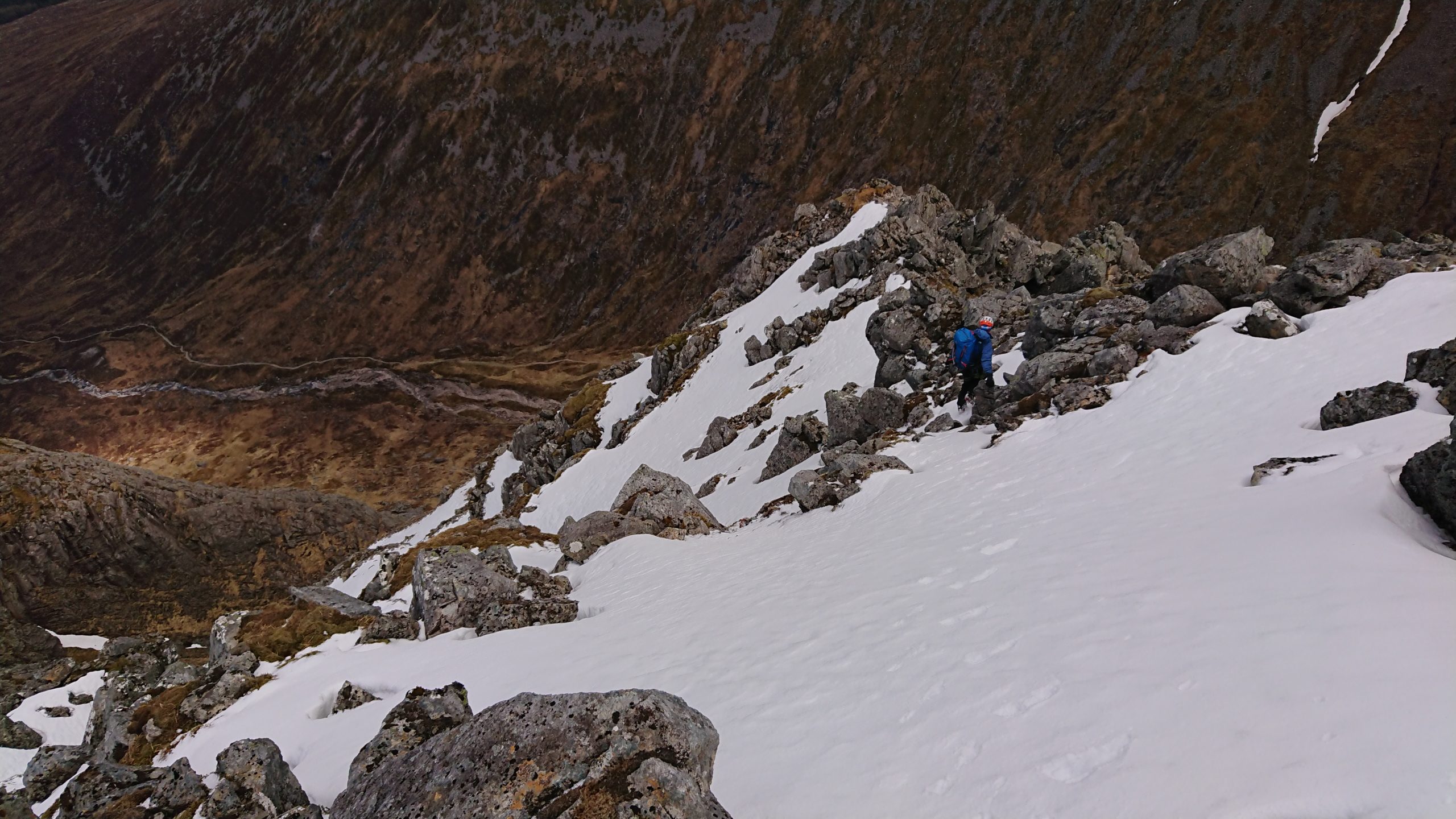 The top of ledge route 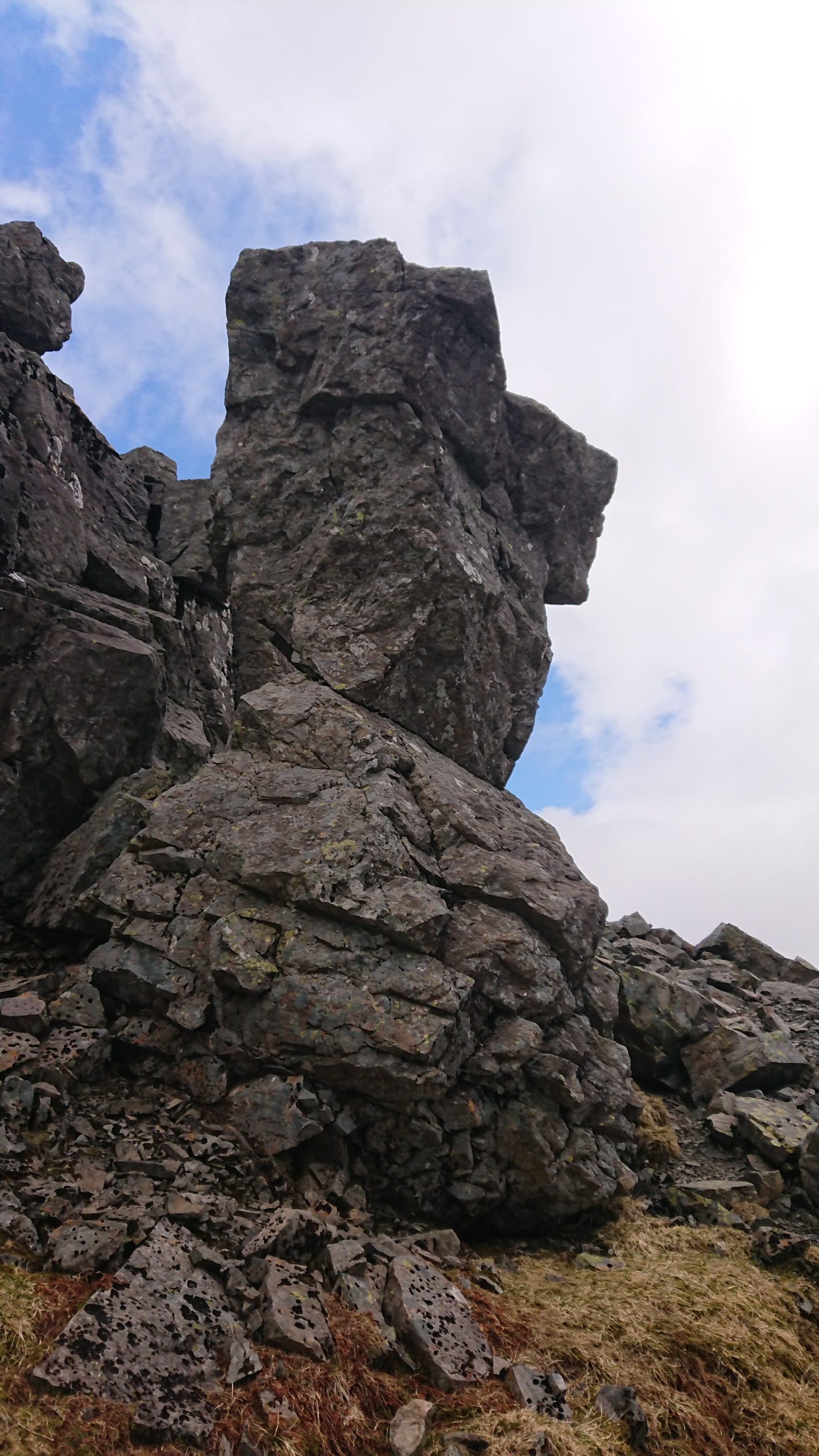 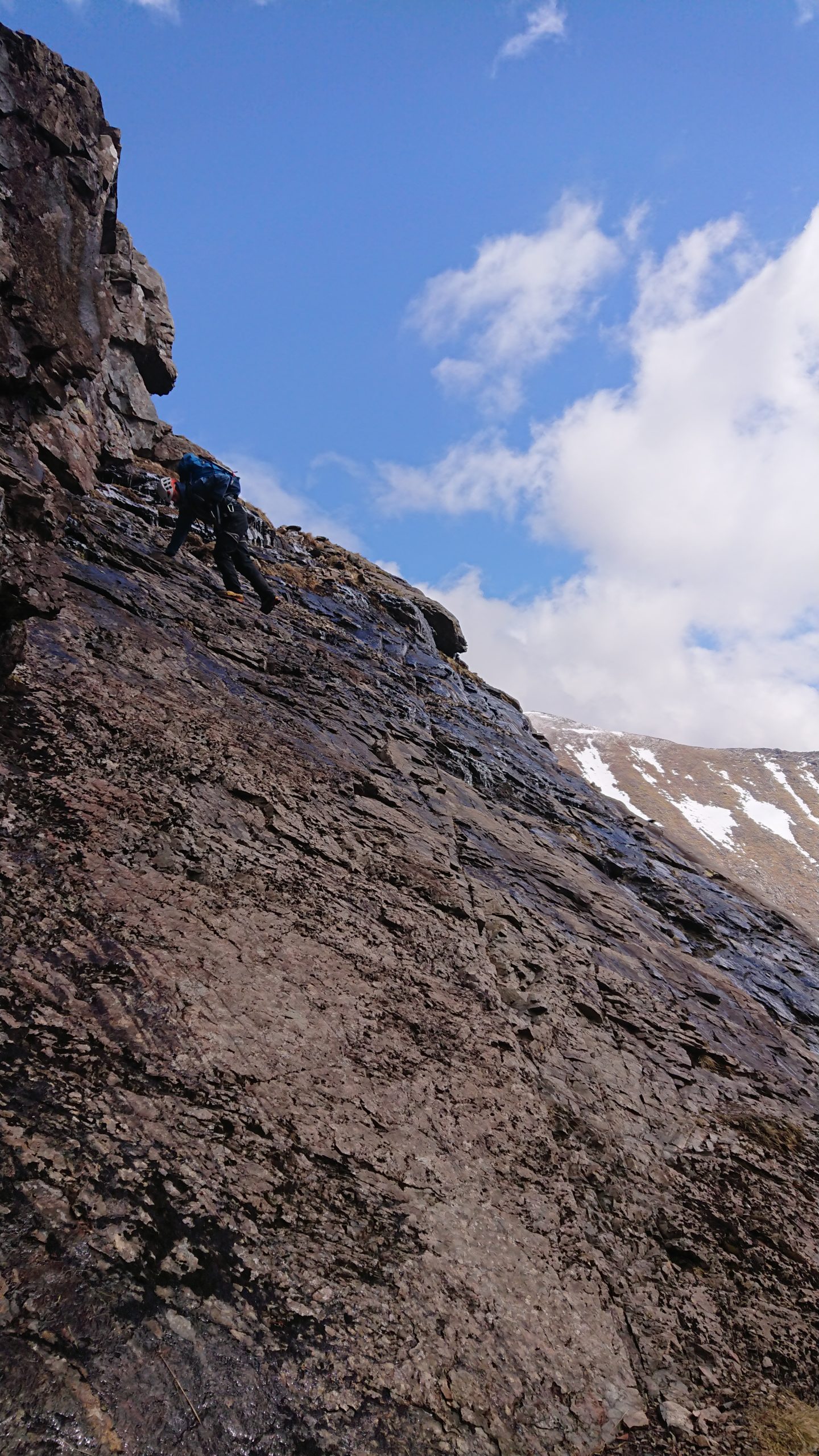 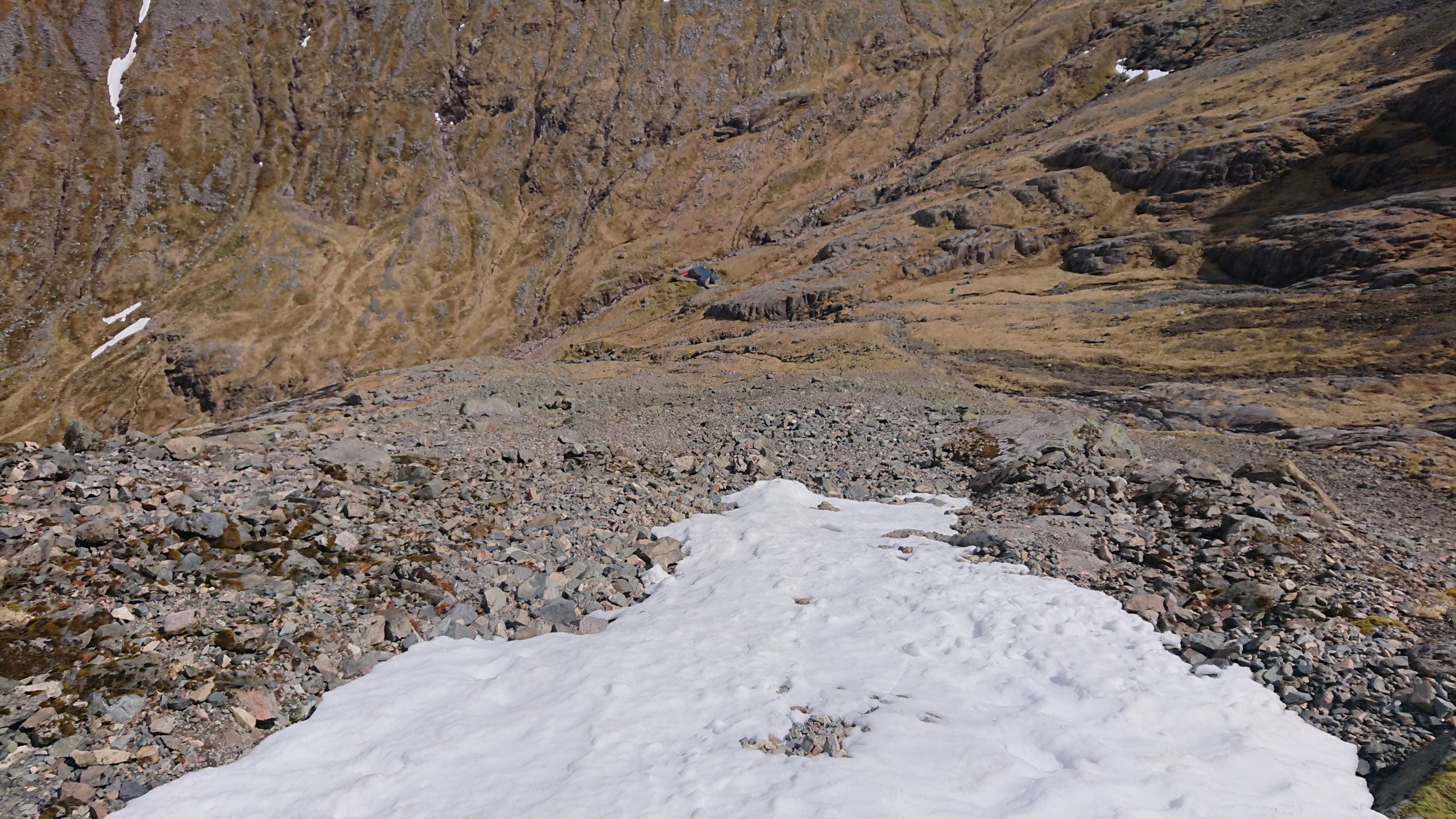 Walking out of number five gully after ledge route, walking from winter into spring. 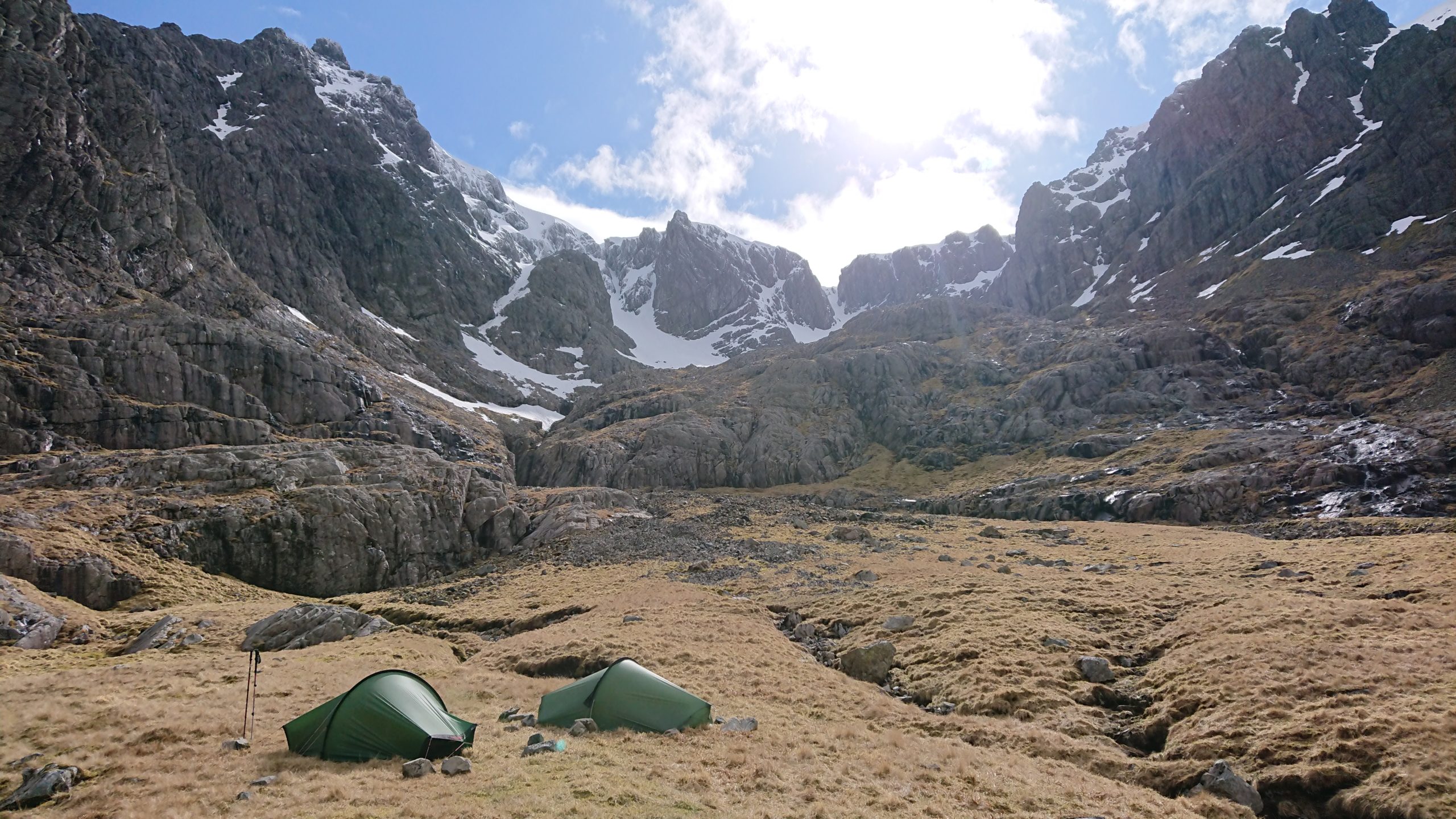 We made it back to our tents and lounged around in the sun for as long as we could before packing up for the walk out.

On the walk out conversation quickly turned to food and proper toilets so we made a bee line for Fort William KFC😋.

If any of this inspires you don’t forget in 2022 the club will be running a Scottish mountaineering trip in Feb /March.

There will also be a smaller climbing oriented trip, conditions dependant and possibly a late season trip in early April staying in the CIC hut.