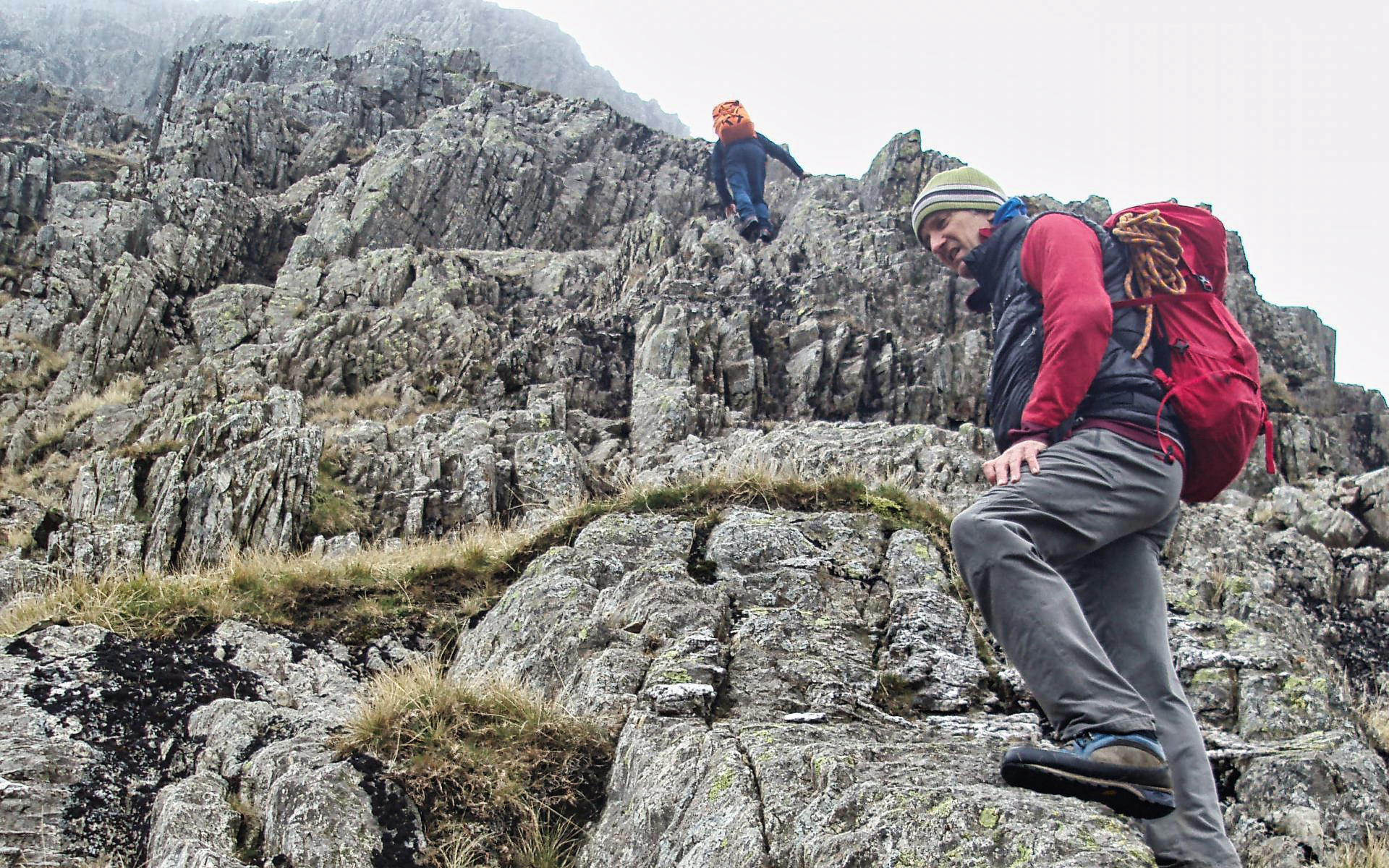 “I’m too old to sit in a campsite cooking on a gas stove, we have to go somewhere we can get a meal indoors.” So shifted the plan for our annual reunion from Wales (pubs for household groups only) to the Lakes.  And the obvious venue was Coniston. I only ever seem to go to Coniston. *sigh*

I’d actually been looking forward to sitting down-clad round the whisky bottle in a campsite in the dark, as though we were still in our expeditionary youth, but I quickly became very glad my soft mates had other ideas. For a start the youth hostel campsite doesn’t allow stoves near tents, and a short walk to a fireside game pie in the Black Bull was altogether irresistible.

We hadn’t been getting out much, and had the usual middle-age collection of niggly joints and tendons, but the mid October weather was OK and Ali had a plan for an enchainement of four scrambles, three up one down.  First a grade one amble up the ridge of Bell, a small nubbly hill above the Coppermines road, familiar from numerous AMC winter trips. It was here I had my first revelation: technical approach shoes are really different. I’d never justified the cost in the past, but thanks to a windfall and some speedy mail ordering I had slipper-comfy feet, with grippy sticky climbing bits, all day. Could change my life.

Then across past the Pudding Stone (don’t try to eat it) to Low Water Beck and the more serious prospect of a grade 3, which Ali assured us doesn’t really follow the beck so would be on dry rock.

“Ah, when I did this in summer there was less water.” No s**t, Sherlock. Anyway, harnesses on just in case, we followed the gully and its margins on rough, sometimes dry rock. At one point I chose a different line and finished up with one move to do on some slopey green slime, so allowed Ali to practice his rope-dropping skills. There was also a deceptively exposed holdless rib, but we were soon up and enjoying a sarnie break by the tarn.  To finish the upwards, the slabs up to Brim Fell were a lot more continuous than they look, very enjoyable indeed, especially when we decided the overhanging crag near the top probably wasn’t part of the grade 2 itinerary.

We declined the Old Man, as busy as any other autumn weekend, and headed for Dow Crag, where we were considering going down the “climbers’ descent.” It took a few minutes to find the top of this line, which is basically a steep zig-zag set of grassy terraces above the cliff of B buttress, down which you climb via Easy Terrace (II). Peering down it, near-vertical grass below which the ground disappeared into the void, our respective reactions were:

“I think it’s all right but I can understand why you wouldn’t want to do it.”

“Nah, not feeling the love for that.”

I won’t tell you which one was me but we left it for another day and returned home by the usual end-of-day delights of the Walna Scar Road.

Pub meal number two (Ship Inn), well-earned sleep and an early pack-up, off to brew breakfast in the car park at Stickle Barn, for Sunday’s shorter day was going to involve Pavey Ark.   The target was Crescent Climb, a route the scrambling guide thought was properly serious and best left to the climbers. As a climb it’s a diff or mod depending what you read, so I was happy to be manoeuvred into leading the long first pitch. The weather was drizzly and as we approached we saw a soloist most of the way up pitch one (50m), who then down-climbed and told us that it was rubbish, loose, wet, unprotectable, the traverse was dripping, we shouldn’t wear rock shoes and he was off to Jack’s Rake. We smiled politely and watched him go under his personal black cloud.

He was right in many respects. It was greasy and the rock none too rough, which made the lack of gear a bit nervy, especially as I was carrying a very stripped-down rack (“how hard can it be?”) but it was fine, and the traverse pitch a bone dry piece of very exposed cake. Not rubbish at all, and I must climb a lot of crap rock because it didn’t seem too loose.

We emerged onto Jack’s Rake to take our place in the queue and got lots of: “Oh, were you the people we saw climbing?”  Well sort of. Here’s what the climbing guide says:

It was a fine mountaineering weekend, in the end, despite our technically lowly achievements, great to get one in as the restrictions tightened. I’ve generally been either snooty or scared about scrambling, but sometimes you just need to do your research, get into the mind set to enjoy the situations, and not be too proud to put the rope on. And buy some nice shoes.