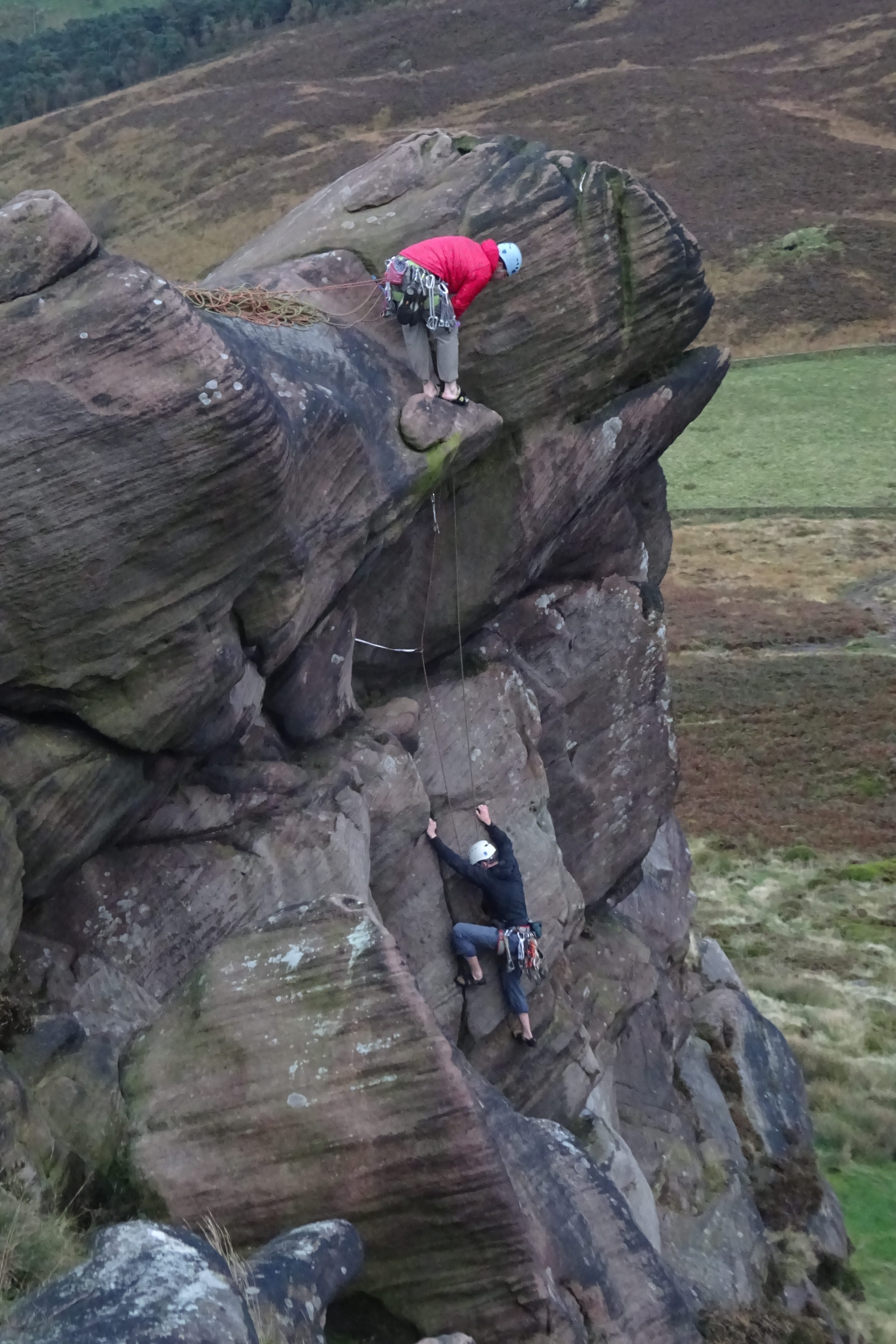 Eleven keen and hardy souls packed themselves into the Whillans Hut at the Roaches for the mid-October Peak District trip, more in hope than expectation of good weather. The Whillans hut is an absolutely unique place to stay and wonderfully close to the rock (read cave…) – and it didn’t fail to live up to expectations. We were determined to enjoy ourselves: Lauren and Adam entertained the team royally with a couple of games, Dobble and the increasingly violent Jungle Speed; plus the ‘weird German game’ Bohnanza that ended after two hours in a confusing draw…

While there were no marriage proposals (unlike last year!), there was at least one application for the Rusty Piton award. Adam emulated Andy last year by forgetting his rack and ropes. These items are considered by most mountain leaders to be fairly essential to trad rock-climbing.

Unfortunately, rain over the previous days meant that even though Saturday was mostly a dry day, dry rock had to be looked for. Nevertheless an enthusiastic group went in search of such rock and found it with numerous ascents of classics such as Damascus Crack and Technical Slab (the pockets described by Dave as ‘elevated pools of water’). Climbing was mainly at HS 4B or below. Dan and Ruth swapped leads on several routes including the entertaining Inverted Staircase, with its ‘weird squeeze’ through the hole on – or is that in? – pitch 2. Lauren and Adam managed 7 routes in total in the one day.

Rob G and George climbed Technical Slab, Bachelor’s Buttress, Rotunda Buttress, and Crack & Corner. George also had a humdinger on, er, Humdinger (E1), where he couldn’t get over the crux overhang despite many attempts. His excuse is that he couldn’t work out where to put his feet once he reached for the far-away jug, since the only footholds were at chest height – ‘but basically I was a bit of a wimp at first and then got pumped by the time I’d made too many attempts’. So he escaped on to the classic Jeffcoat’s Buttress – ‘very pleasant’.

In addition to trad climbing, Harry went bouldering – there is so much to do at this place. Nick and Andy committed themselves manfully to a Day Of Faff; having climbed Heather Slab they went further afield to the Skyline where they continued to faff about, failing to trust their nerve and commit to Crack & Slab, but nevertheless shaking their way up four more routes.

Sunday was another wet day and most headed for home after a thoroughly enjoyable Saturday. However, hardy souls Dan, Ruth, the two Robs and George went walking along the Roaches ridge and up to Luds Church, that strange, deep narrow canyon in the hillside, before returning to a well-deserved hard-core tearoom lunch.

I always feel if you get one good climbing day out of a weekend trip then it’s worth it. Certainly we made the most of an enjoyable, sociable weekend away with friends in a cave! (Honestly, it’s a fantastic place!)