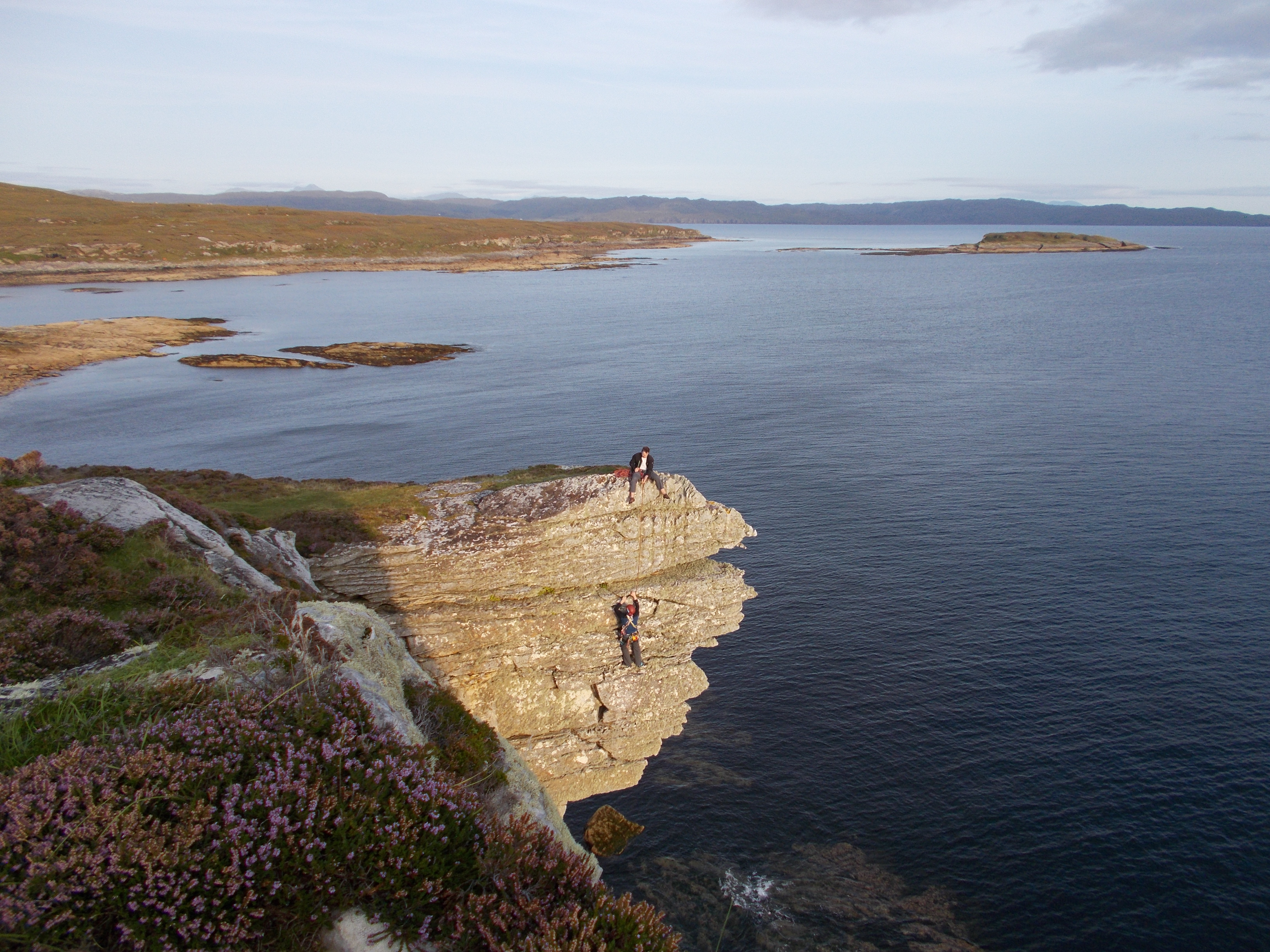 August came and went too quickly, but for those who enjoy Highland sunshine, midges, battered pizza and Classic Rock ticks, the AMC’s first summer trip to the Isle of Skye certainly had enough to offer. Four of us made the long drive north to make the most of a week off work in one of the most beautiful corners of the UK. 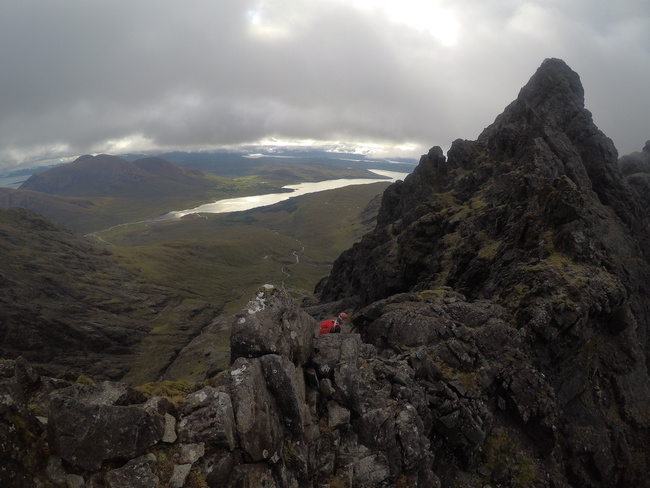 A typical view on the Isle of Skye. Approaching Clach Glas

It is no secret that Skye is a long way from Bristol, which is why Paul, Lauren and I made a detour to the Lake District to get some warm-up climbing in. As we closed in on Langdale, so did the weather and it wasn’t long until we were walking along a sodden path, struggling to make out a Gimmer Crag shrouded in cloud. Nevertheless, after a slog up the side of the valley we found ourselves at the foot of the Classic Rock line Ash Tree Slab (VD). Despite water flowing down the face, Paul made light work of the first pitch and the sun was even threatening to break through the clouds as the three of us topped out. An abseil descent (which we knew was safe because someone had backed up the 2 10mm ropes with 3mm accessory cord) and another long slog through the bracken to the base of the valley and we were back in the van heading to North of the border. 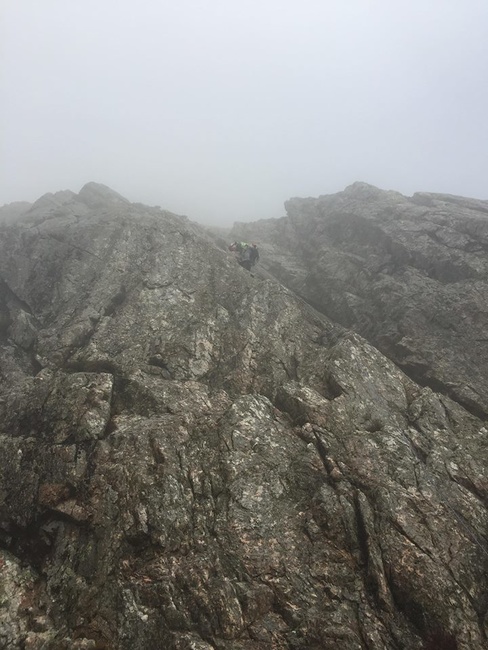 The next day we continued our journey to Skye, with Vianney joining us driving from Glasgow. As we did not arrive on the island until the afternoon we decided to head to Elgol and do some single-pitch sea cliff climbing at Suidhe Biorach in glorious sunshine. Sadly, Vianney was a bit later joining us and so it was just me Paul and Lauren climbing again. After abseiling down to the base of the climbs, Paul was the first one to enjoy the excellent rock on Fertility Right, a good but quite testing severe. We abseiled back down again and I then led Hairy Mary (VS) which zig-zags up the impressive jutting formation over the sea. We even had an admirer taking photographs from his little dinghy. 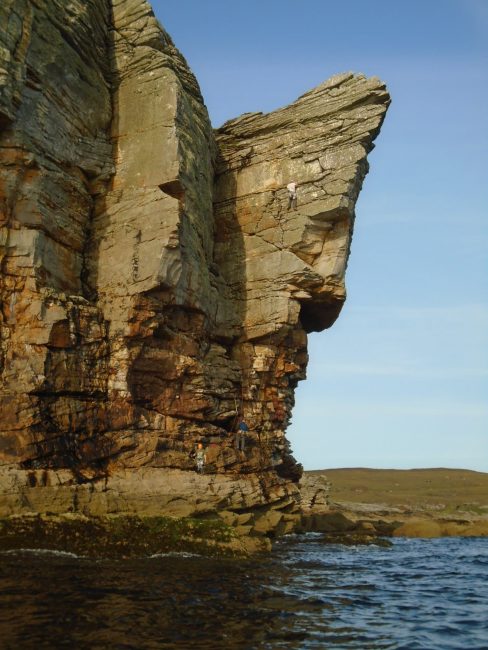 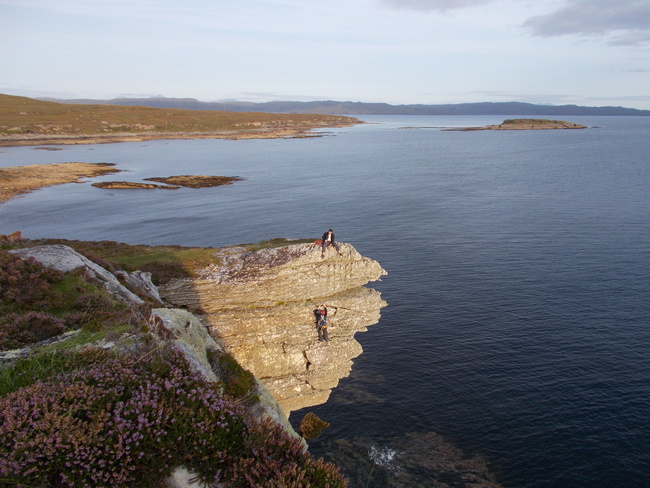 Evening climbing in the sun at Suidhe Biorach

Monday was another good weather day so we decided to venture onto the Cuillin. We headed to Sron na Ciche, dubbed by some as the best mountain crag in the UK, and it’s easy to see why. On the long approach from Glenbrittle the towering slabs only get more and more impressive as you get closer. 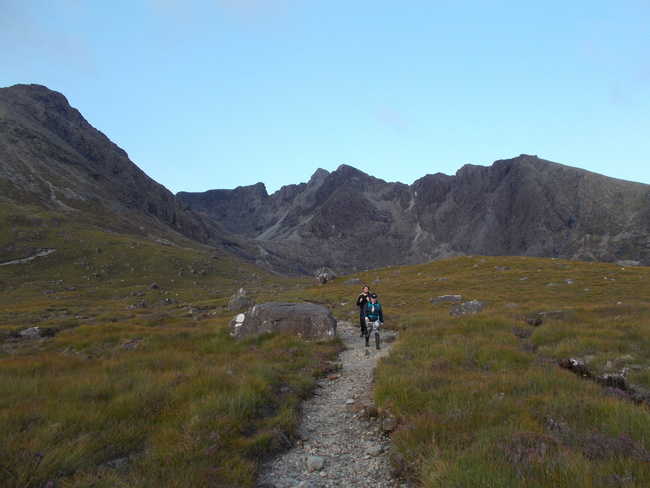 We split into two pairs to take two separate lines up the face. Paul and Lauren took the excellent Cioch Right (S) while Vianney and I took another Classic Rock line Cioch Direct, a great but tough severe which put up more of a fight than most VSs I have led. After a few slight struggles on Cioch Direct, it was no surprise that we were second in reaching the large ledge at the top of our climbs (but only halfway up the crag). Paul and Lauren were already busy taking Cioch Nose (S) up onto the top of the Cioch. An impressive protruding formation the Cioch gave its name to all the climbs we did that day and was made famous by the Highlander film (someone has even left a plastic sword at the top for climbers to do their own re-enactments from the film). Our day on the mountain ended with us trying and failing to take what the book described as a straightforward scramble down and with us actually abseiling directly down a waterfall. Nevertheless the walk back down in the setting sun gave our clothes plenty of time to dry. 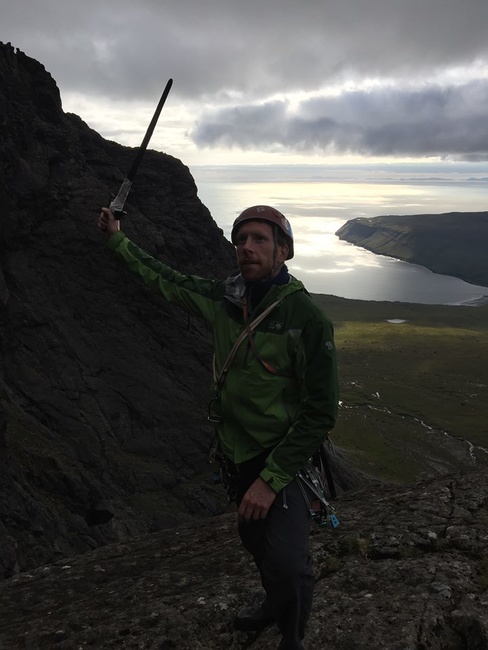 “There can be only one AMCer!”: Paul (probably)

On Tuesday the inevitable happened: a wet day. With some foul weather coming in we decided to spend the day watching Father Ted on a laptop, walking around the island’s largest village Portree, enjoying the food at the Sligachan Hotel and admiring their display of dogs of the month.

By Wednesday morning the weather had cleared and Paul and I made an early start to go tackle the Cach Glas – Blabhein traverse, a classic ridge scramble that would certainly be a lot more popular if it wasn’t in the shadow of the larger Cuillin Ridge. After a steep start we were greeted with spectacular views back across the sea lochs and ahead to the ‘Matterhorn of Skye’: Clach Glas. Summiting this turned out to be harder than we expected, with a truly difficult and truly terrifying pitch of ‘Moderate’ climbing that fortunately (for me at least) Paul was on the sharp end for. It wasn’t long until we met the cloud which had been obscuring our final destination, the peak of Blabhein. A few more sections of scrambling and a couple more wet and slimy pitches of climbing found us on the main path to the peak and the first time we came across anyone else that day. It wasn’t long until we had descended the main path back down to the car park and had driven back to Broadford where we set ourselves up drying all our gear in the now sunny car park by 3pm. 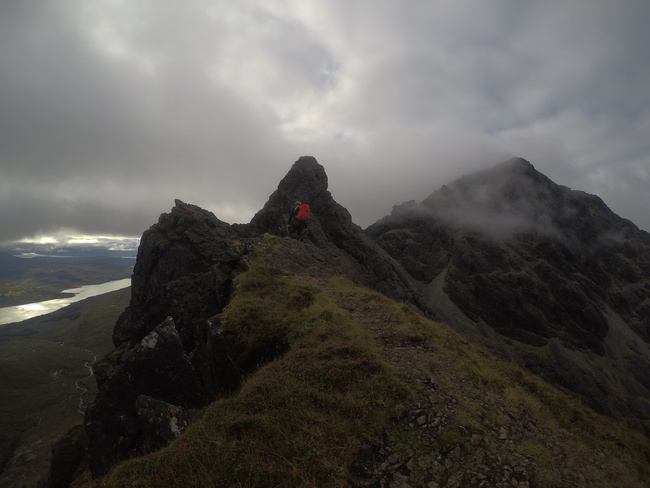 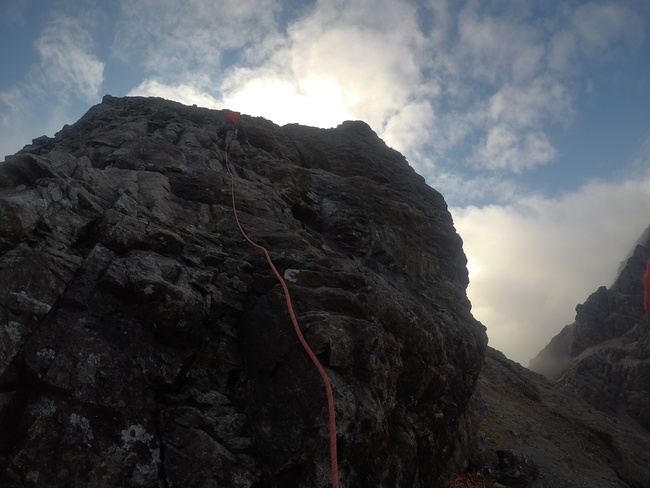 Meanwhile, Vianney and Lauren had a slightly later start and had set off to get some climbs done on the Cuillin. Unfortunately the persistent cloud cover on the crag meant that nothing was going to dry out so they opted to go for a scenic walk around Glenbrittle instead, of course not skipping past the café, before meeting Paul and I at our makeshift camp in Broadford. With the weather forecast showing consistent rain for the next few days we decided that it was time to bid farewell to Skye and headed back south, stopping in Glasgow to sample the local delicacy of pizza crunch supper with Irn Bru, a true athlete’s dinner. 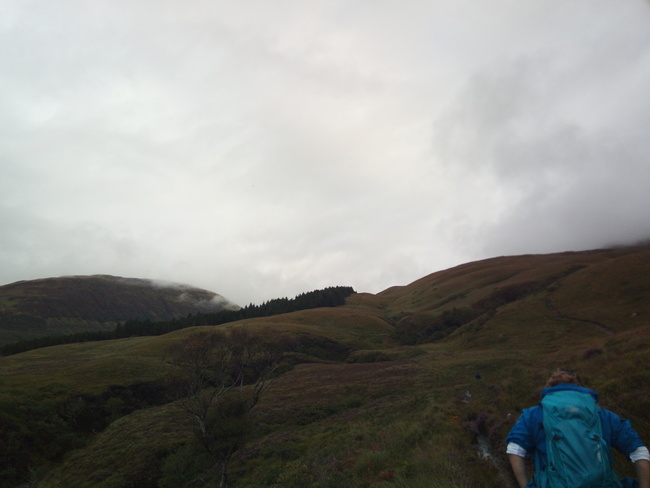 A pleasant walk across the glen

On Thursday, with Vianney staying in Glasgow, Paul, Lauren and I left Scotland to start the long drive down. Constantly checking weather forecasts we decided that we could squeeze some more climbing out of the trip and made a diversion to the most promising of the climbing areas on the way home, the Roaches. Unfortunately the Roaches itself had suffered some recent wildfires and fire crews had blocked access off as they cooled off some hot spots. We therefore turned our sights to the neighbouring crag of Hen Cloud where Paul led Ancient (VD) under a constant threat of rain and I led K2 (S), yet another Classic Rock line. The rain finally caught up with us after topping out so it was time to finally call an end to the trip and to head back to Bristol, full of satisfaction and an eagerness to return to Skye. 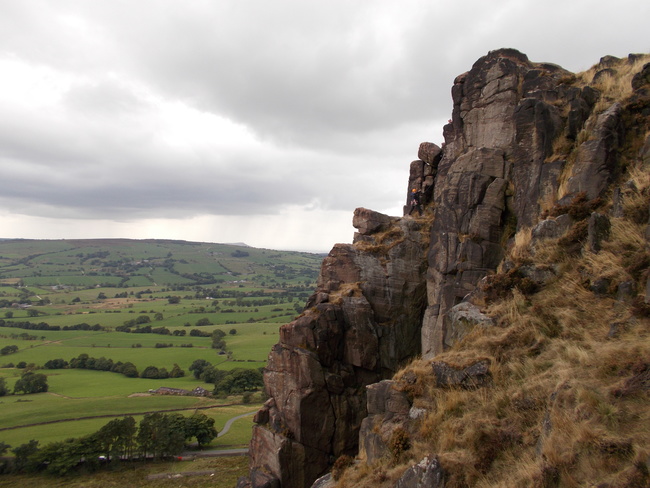 The easy top section of K2 at Hen Cloud