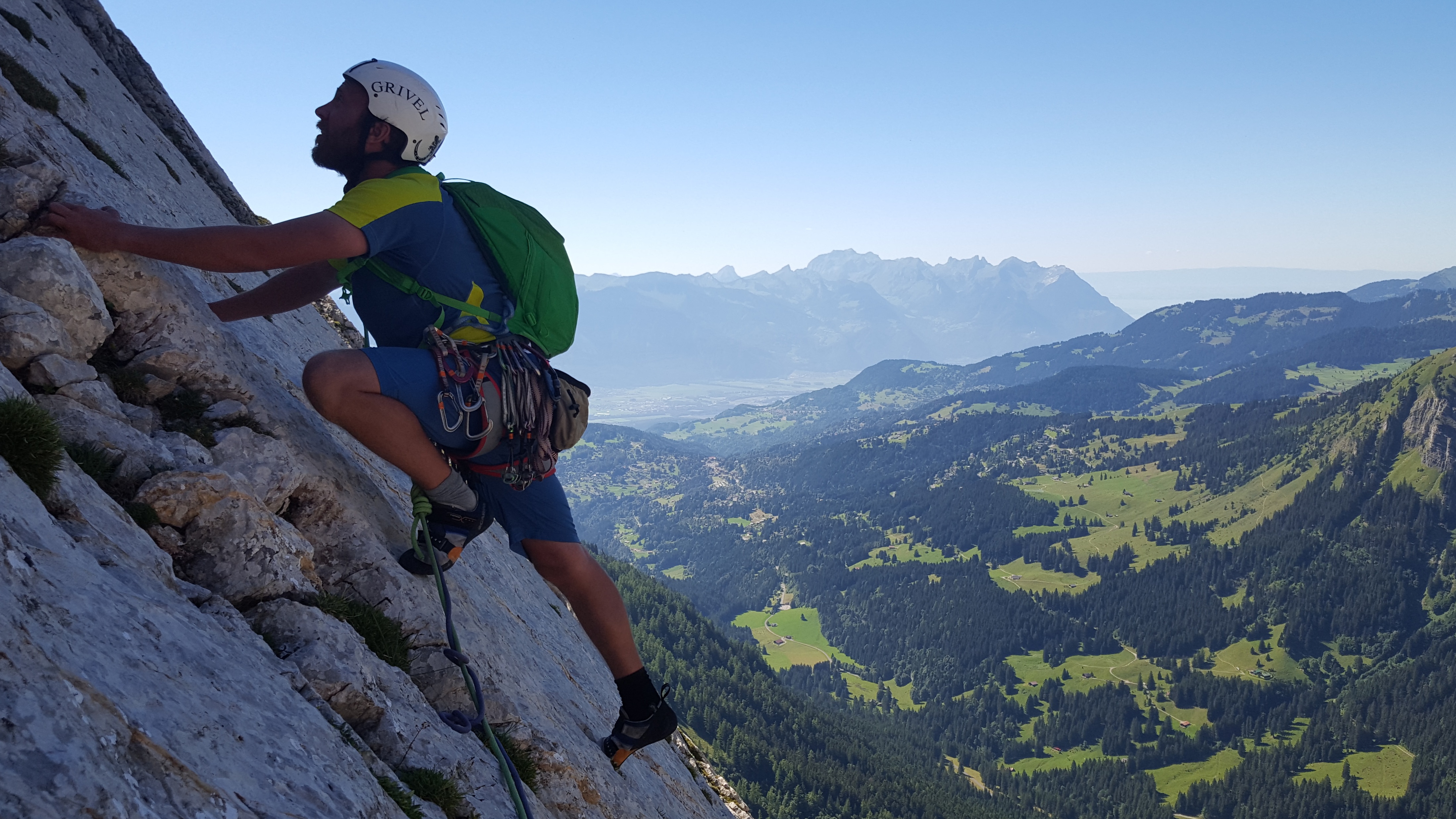 Trying and inevitably failing to sum up my three month cycle trip into a snappy sound bite for curious colleagues has debatably been more challenging than the ride itself. I am not going to attempt to do that here. Instead I will focus on one country, Switzerland, during which I also enjoyed a few days climbing during my two weeks exploring by bike and camper van.

To give you a bit of background on the 1st of August 2016 I set off on a 5631km solo cycle journey from London to Athens. The ride took me through 14 countries over 88 days. The map below shows whereabouts I stayed on each of the nights. I kept a blog during the trip where you can find a more detailed description of the rest of the ride. 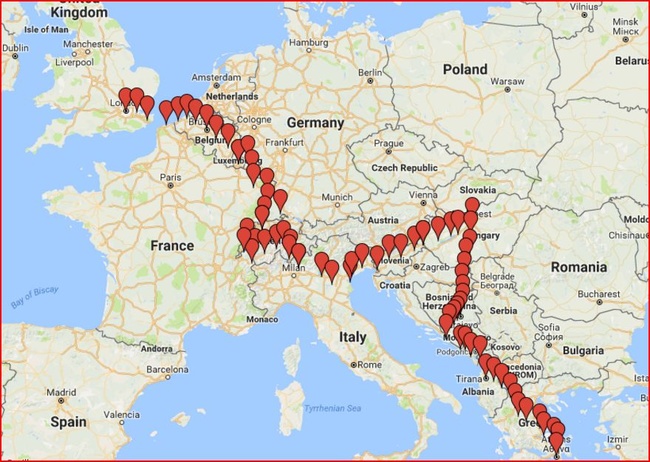 Map of my journey

Switzerland was the sixth country which I visited and probably my second favourite of the whole trip, second only to Bosnia. After two and a half weeks on the road I arrived in Switzerland after a rather soggy couple of days in Germany’s Black Forest. I had arranged to stay with a couple in Basel through the warmshowers network. Warmshowers is essentially couch surfing exclusively for cyclists and the hosts have often been on tours of their own. This means that they understand that what you really need when you bowl up on their doorstep is a shower (obviously), the opportunity to do laundry and eat twice the amount of food as a normal person.

If Carlsberg did cycle touring destinations they would do Switzerland. Probably the best cycling in the world. There is an extensive web of brilliantly signposted bike routes and surprisingly it’s not that hilly. Now don’t get me wrong there are countless epic mountain passes but it is possible to cycle for days sticking to the gloriously flat lakes and valleys. The only drawback is that the views are so spectacular that you have to stop every couple of minutes to take another photo.

View down into a beautiful Swiss valley 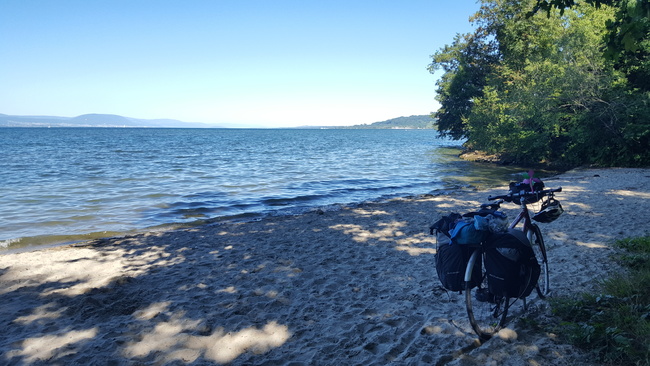 Whilst passing through Switzerland I couldn’t resist taking the opportunity to experience my first real mountain climbing routes. Prior to this trip the longest route I had ever climbed was five pitches and due to my poor navigation and tendency to seek out chossy loose rock it hadn’t really gone according to plan. Despite this the 14 pitch adventure suggested by my climbing partner, Stu, sounded like a great idea!

We climbed the Normale Ypsylon (5c) on the Miroir d’Argentine, a vast mirror-like slab high up in the Vaud Alps with stunning views all the way down to Lake Geneva. Apart from one crux pitch, made easier by a few pieces of aid, the climbing was relatively straightforward. There were four or five vertical pitches followed by a long traverse across the slab following a prominent crack perfect for jamming all manner of limbs. 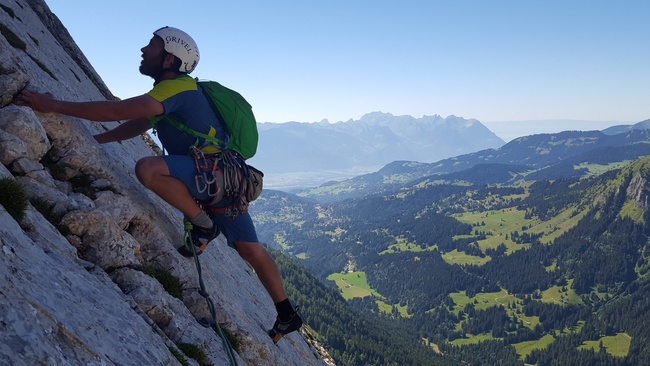 Stu on the slab 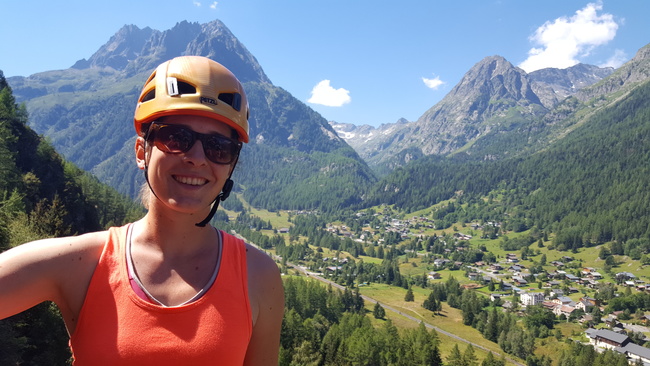 What we didn’t count on was another team from an adjacent route reaching the final pitches at the same time as us. Here our Britishness let us down as we let them ascend first and quickly came to regret it. To say they had a mare would be an understatement as they managed to climb past the bolts, ran out of rope and had to begin climbing together. A novice and her boyfriend tentatively inched up from the bottom as the third guy at the top attempted to top out over a seeping overhang. Fortunately everybody reached the top successfully but by this point we had lost about an hour.

After taking the obligatory summit selfie we attempted to locate the way down. That was easier said than done. What we didn’t realise was that the path went over a knife edge ridge which we retreated from due to the startling exposure, forcing us to take a long winded route around the back of the mountain. This combined with pitch darkness, inappropriate footwear and an uncomfortable amount of scree certainly made for a hair-raising descent. By the time we got back to the car park it was almost 11pm and Stu’s flat mate had come out with a head torch to try and find us. 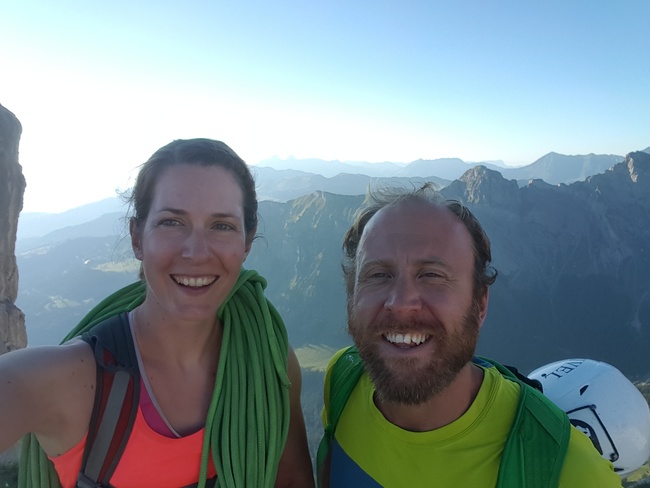 The next day I was in a bit of a sorry state. Turns out three weeks of cycling is not adequate preparation for a 13 hour expedition. I could barely get up the kerb nevermind a flight of stairs. We chose to spend a rest day in Chamonix and watch the start of the Ultra Tour de Mont Blanc. The town was filled with lean, mean running machines and making me feel inferior as I waddled around. Hopefully people thought that I had just finished one of the ‘shorter’ 50km or so races… 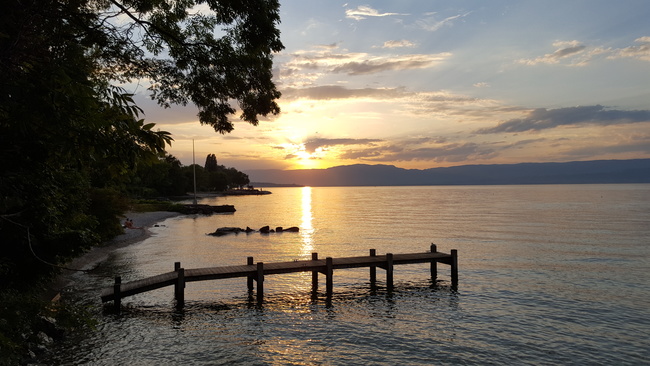 After a few rest days at Lake Geneva the ability to freely move my legs eventually returned. Any trip to the Alps would not be complete without tackling a mountain pass or two. One of the highlights of my ride has to be the Furka Pass. At 2436m it’s quite an undertaking on a fully loaded touring bike and certainly put my thighs to the test. The ascent lasts for 16km and took me the best part of a day with plenty of stops for photographs and peanut butter sandwiches. At the top I encountered the Furka glacier whose melt waters I had followed all the way along the Rhone valley from Lake Geneva. The views were some of the best of the whole trip.

At the top of the Furka Pass

Cycling and climbing in the Alps was a fantastic experience that was over all too quickly despite spending over two weeks there. I can’t wait to go back and tackle some more alpine climbs. Although I may have to put in some training first after returning home with 3cm added to my thigh circumference and 2cm lost from my biceps!

This is merely a snapshot of an incredible trip. I will be doing a short talk at the AMC Christmas meal in a few weeks time where I will talk about some of the logistics, challenges and other fascinating countries I travelled through. You can also find out more at www.megabikes.wordpress.com