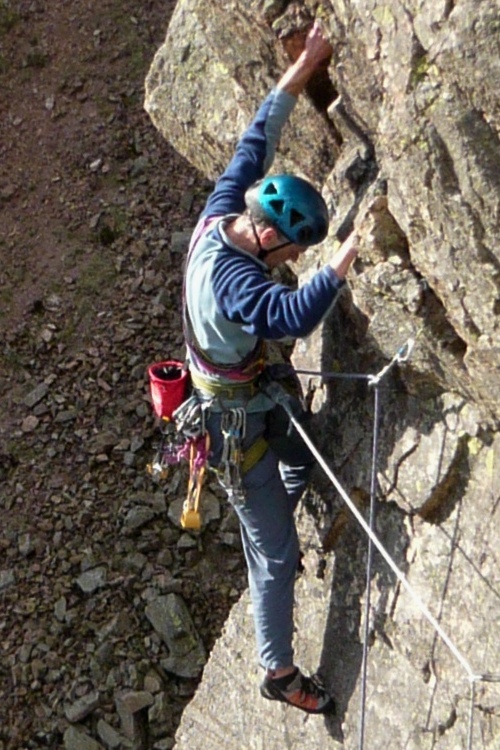 That’s Me That Is

It’s the Rockhopper Mountaineering Club’s 60th Anniversary weekend and, after a train ride down from the Snowdon summit photo, I am in Llanberis High Street browsing in Joe Brown’s. I find a copy of a guide book I’ve been looking for and flick through. And lo and behold there I am.

Rewind five years to a fine spring day in March and I am in Langdale with the Avon Mountaineering Club. We are staying at the Robertson Lamb hut and I suggest to my climbing partner Dave that we should go up to White Ghyll, as it is close at hand and has many quality routes. I have my eye on Do Not Direct, an E1 on the lower tier that ascends the steep wall to the left of Laugh Not. Dave is happy for me to lead so I gear up and set off up the first pitch. The going is straightforward to a ledge below a steep wall. This succumbs to a few strenuous pulls and a bit of technique, to land me at the belay ledge. I bring Dave up and contemplate the second pitch. This looks more delicate, up a groove before moving left towards the arête. I set off with a touch of trepidation, but my fears are unfounded and progress is steady in my typically deliberate way. There are more gear placements than appear from below and this gives me the confidence to make the steep moves across to the arête. Behind me I am vaguely aware of another climber who is topping out on Man Of Straw. That’s a route on my tick list but I have always thought of some excuse to do something else.

The proximity of Man Of Straw brings back memories to another trip some thirteen years previously. That time it was a Rockhopper trip to Langdale and we were again at White Ghyll. I was climbing Laugh Not, an outrageous HVS up a clean cut corner, and around the corner, out of sight, another pair of Hoppers were climbing Man Of Straw. I can’t remember exactly who it was, maybe Martin and one of the twins, most likely Alex. Martin was leading and had made good progress up the corner but had ground to a halt somewhere near the roof. He hadn’t made the move around the roof  as that would have brought him into view to my right. From what I could sense he couldn’t move forward or back, he was stranded above his last piece of gear. After a considered pause came the call “I’m going to jump”. He sounded calm, then came the rattle of the fall as the rope and gear came tight against the pull of gravity. That has stayed with me, purposefully jumping onto trad gear is a brave act – have you tried purposefully jumping off above your gear in the safety of a climbing wall – it takes determination to suppress the self-preservation instinct. That was one of the reasons I had chosen Do Not Direct over Man Of Straw.

Relaxing under the tree, post-climb, a fellow climber, I did not know, approached me. He told me he had taken a picture of me on Do Not Direct from the top of Man Of Straw. He said it was a great picture and worthy of inclusion in the guide book. He showed me the image on the tiny screen of his camera, and I asked if he could email a copy to me. I gave him my email address on a scrap of paper and we went our separate ways. Days turned into weeks, weeks into months, and months into years, but I never did get that email. In the last year I became aware that a new Langdale guidebook had been published by the FRCC, but I never saw it in any shops, until that day in May. But there in Joe Brown’s is a copy – I open it and flick through. As is the modern idiom there are a lot of pictures. I go to the section on White Ghyll and see an image of an unnamed climber on Do Not Direct. Could that be me? The clothes look right, the blue fleece and trousers, the helmet looks about right as do the gear, the chalkbag and shoes. It must be me. The head is looking down and the face is mostly hidden. The ropes create a pleasing geometry beautifully drawn. The sun illuminates the climber and the rock, with the dark brooding gully in stark contrast below. At the bottom of the frame the belayer’s head appears as if cut off from the rest of his body. The belayer is looking up and this is the clincher because there’s no mistaking Dave’s mug. 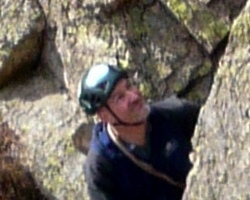 So if you turn to page 50 of the new Langdale guidebook you will see – that’s me that is.