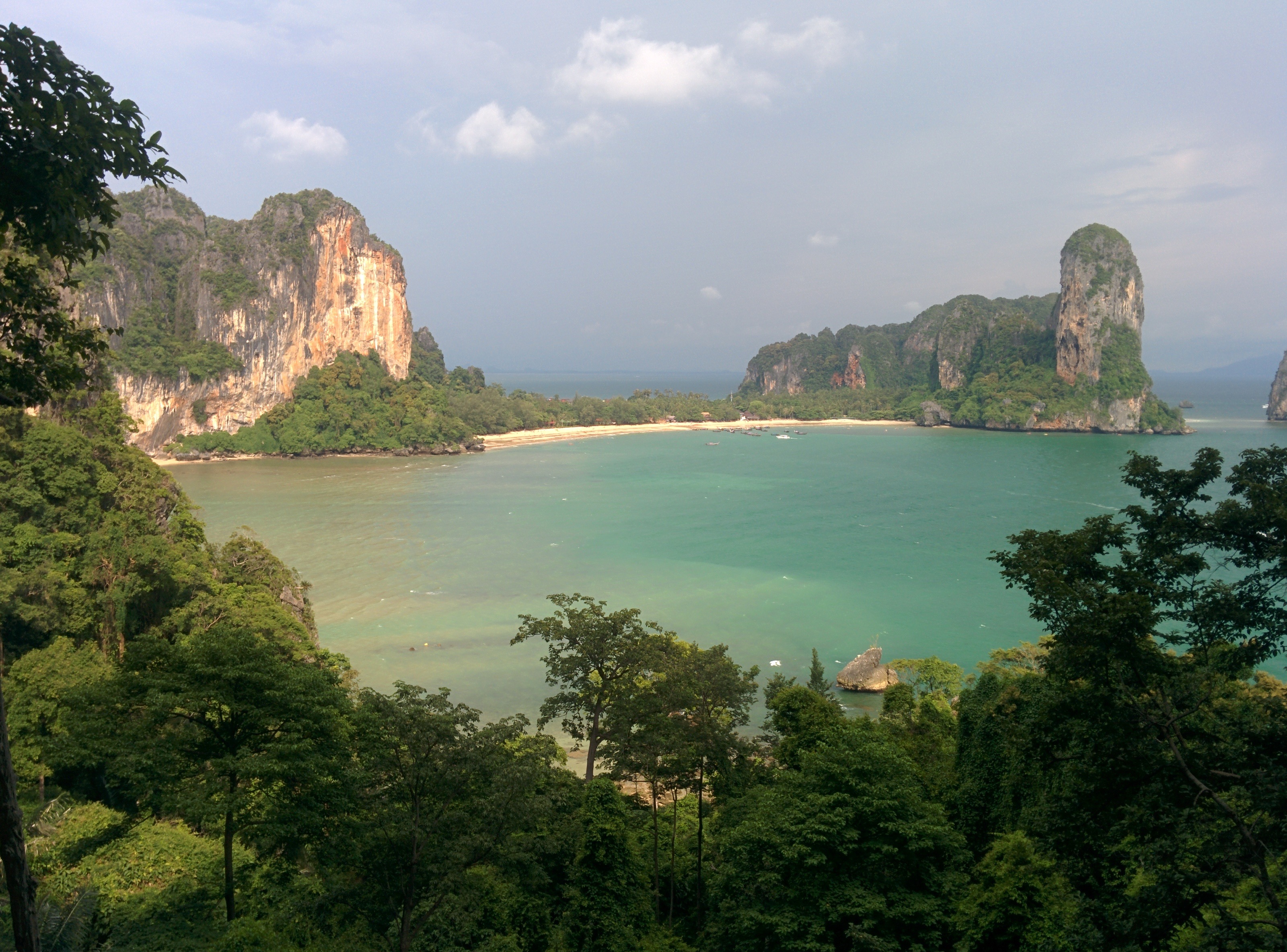 A Trip to Thailand

With darkness and cold setting in, I’ve been reminiscing about warmer times.. Back in August, Win and I went on holiday to Thailand, where we sampled the popular climbing destination of Krabi.

We’d never climbed abroad before, so it seemed a fairly exotic location for our first trip. I always imagined my first climb overseas would be a little closer to home…maybe Guernsey? Fortunately though, Win is quite the explorer.

Despite it being the middle of the monsoon season, the rain seemed to dissipate just as we arrived at Railey. Brilliant! Taking this as a good omen we quickly hopped onto some climbs on the stunning Pra-Nang Beach, where I was promptly kicked off a 6c named (aptly) Little Shit. Perhaps our enthusiasm at a first climb had gotten the better of me! For the rest of the day we took things a little easier.

We soon moved over to Ton Sai, where most climbers seem to spend their time. Our sights were quickly set on the main objective for our trip –  Humanality (6b+). This 6 pitch local classic involves an interesting crux pitch that, according to the guide, requires you to ‘think 3D’ as holds start to run out. This all sounded great, but after the earlier kicking we needed to get our practise in first! 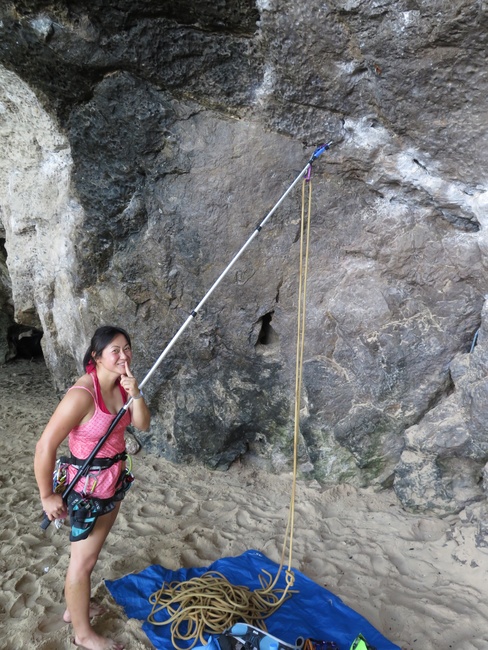 (Don’t worry, nobody saw us)

One of our first climbs over this side was Groove Tube (6a) at Fire Wall. It follows a somewhat tube-like groove formation which is dotted with loads of juggy pockets, making for plain fun climbing. Even the copious polish didn’t detract! It’s next door neighbour, Boob Tube (6b), also provided an interesting challenge (we utilised the old ‘beached whale’ trick to get established on the climb’s ledge at half height – always a useful move to have in your climbing repertoire). 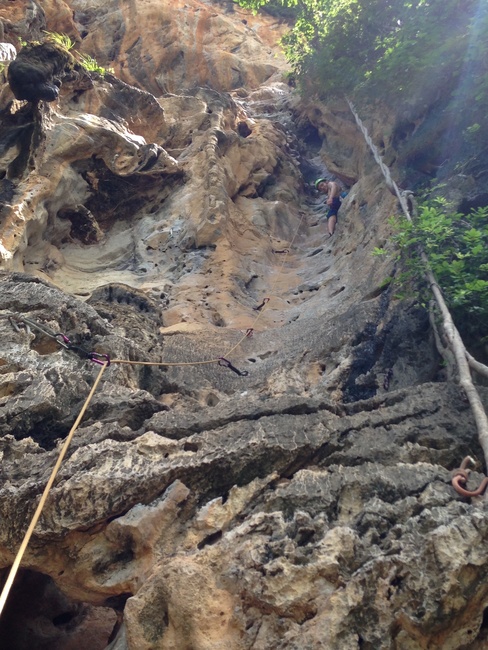 Another fantastic day was had at Eagle Wall. Isolated at high tide, we took a longboat to a small secluded beach. From there, we walked a short way through the jungle to reach the rock. Where Eagles Don’t Dare (6a+) provided some fantastic airy views, though the poor belayer gets left at the mercy of the jungle’s mozzies. At the end of the day we simply walked back across the bay at low tide. 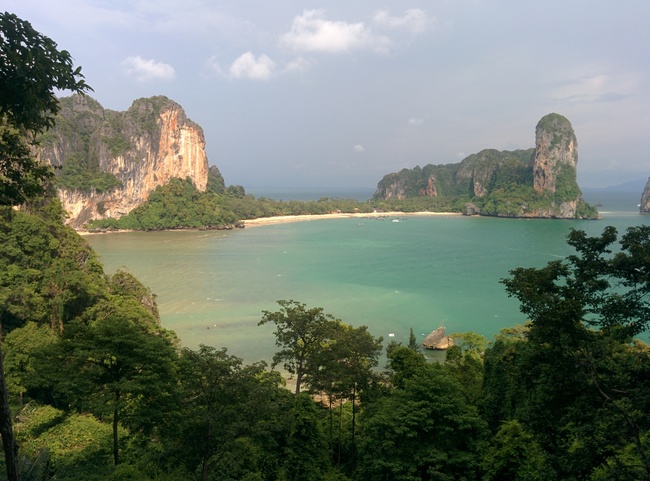 On planning the trip, I did often wonder how much gear we would need to bring. Win and I opted to take our own equipment; rope, quickdraws, *cough*clipsick*ahem* etc. The majority of routes have very trustworthy titanium bolts, thanks to the Thaitanium Project. However, there are also many in situ rope threads which require caution. One such thread we encountered was unnervingly displaying several inches of core, so I was glad to have packed some sling-draws!

There is more to do in the area than just climbing of course. Kayaking around the peninsula makes for an adventurous day out. A ‘rest day’ walk to an inland lagoon turned out to involve quite a serious scramble (the nerve-wracking, flip-flip fraught descent is well worth it though). 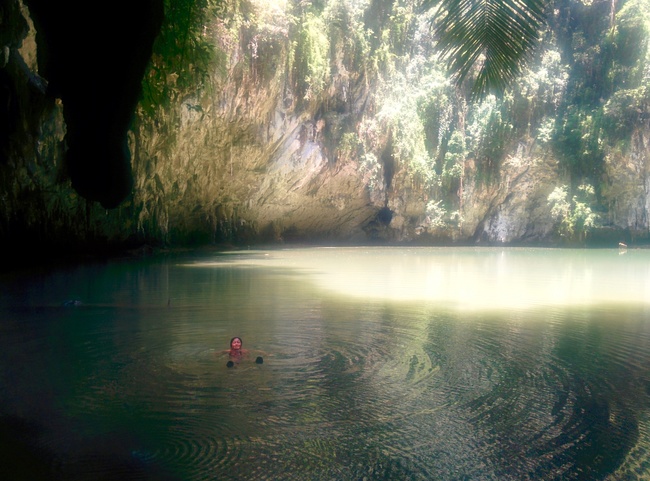 Finally, we felt ready to get ourselves on Humanality. This meant a bit of an ‘Alpine start’ as, unlike at home, climbing directly in the sun in Thailand is horrible. We were on the route by 7.30. 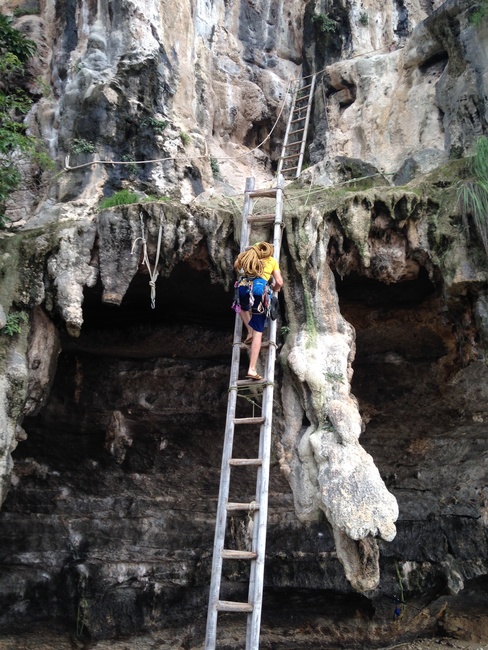 Not to brag, but I did think this pitch was a bit of a ladder

Win and I alternated most of the climb. The first two pitches involve a fair bit of traversing and are primarily there to get you established on the main face. Win then took on the intimidating 3rd pitch (6a+) with style, and I inched my way up the 4th pitch’s fantastic tufas (6b). This left us ready to take on the crux pitch.

True to the guide, the ample holds do run out quite abruptly and you get a sudden dose of exposure. I won’t give away the game too much but I would suggest copious amounts of expletives and liberal application of Elvis leg help get past this section. There was a sense of relief and achievement after both making it to the final belay cave. 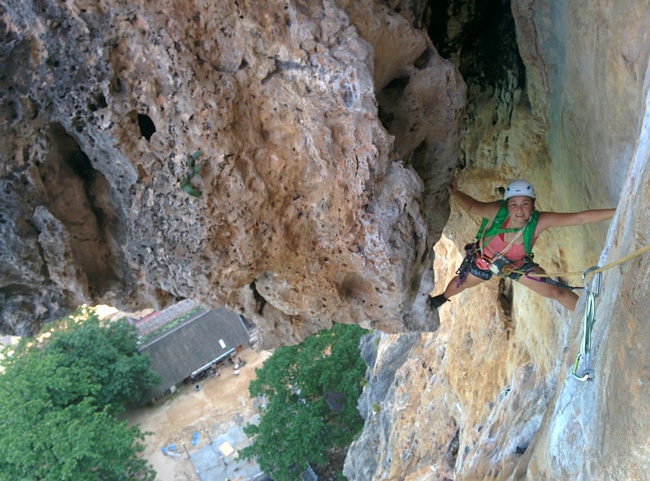 Win holding a pose on the crux of Humanality

After the final pitch, the abseils land you directly in the bar. Exactly what is needed after all the excitement!

Our final day of climbing was spent trying out a bit of Deep Water Soloing on a guided tour organised by Basecamp Tonsai. It was a great day out, but I discovered DWS is actually really flipping scary and didn’t get on anything higher then a few meters. Others in the group were much braver and tackled some great-looking routes about 10-20m above the water. 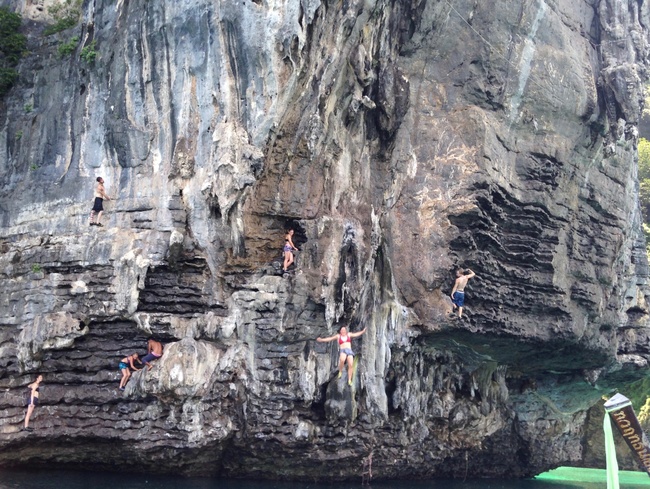 DWS – Win was a lot braver than I was!

And so, our trip was concluded. We really only scratched the surface of what was on offer and I can see why people come back! However, we may go for somewhere a bit closer for our next climbing adventure…maybe Guernsey…