After numerous changes of plan thanks to the conditions and a very last minute change of partner, I was finally in Bristol airport waiting for my plane to take me to the alps. After a very delayed flight and a missed coach I finally made it to the beautiful Italian town of Aosta where I met up with fellow AMC members Becky, Dave, James and Jon. They had had a very successful week thanks to the wonderful weather which broke the evening I arrived, between them in a week they managed to tick off the Gran Paradiso, 6 of the Monte Rosa peaks, Castor and on the last day James and Jon managed to tick off the extremely classic traverse of Liskamm.

After heading over the Grand St Bernard pass the evening before to get to Aosta, the next day Becky, Dave and I found ourselves heading back over the pass, very slowly in Becky’s van. We headed up the Rhône valley to arrive at a very wet campsite in Fiesch. 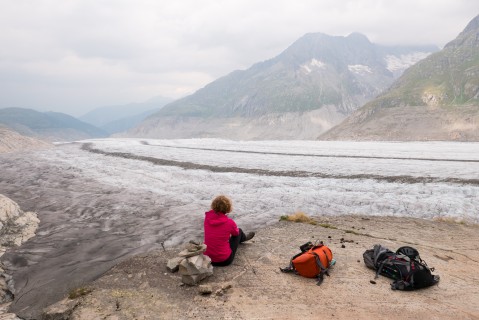 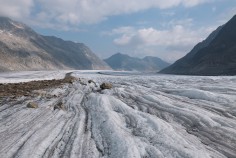 Feeling small looking down the Aletschgletscher 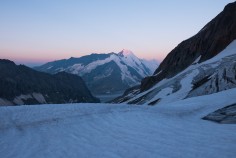 Stunning scenary around the Konkordiaplatz Dawn light on the Jungfrau

Approaching the summit arete on the Mönch 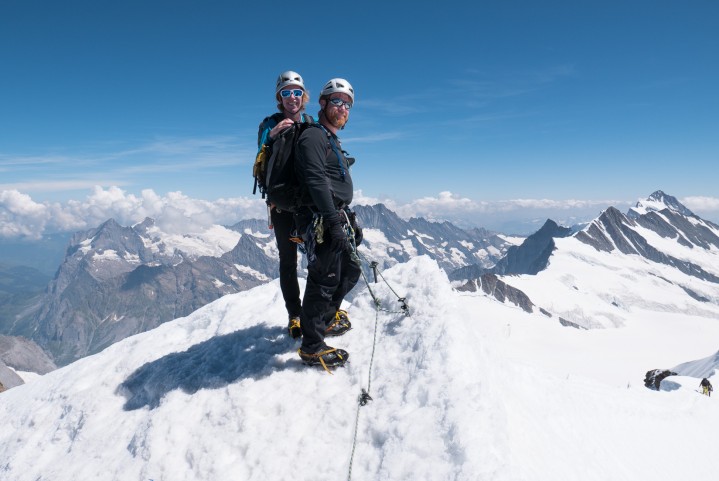 I wasn’t very acclimatised and met up with people who were, which meant that finding objectives was a bit of a challenge. We decided to walk up the Alesha glacier from Fiesch to the fantastic Konkordia hut. Walking up the largest glacier in the alps certainly makes you feel small and insignificant.

The next morning we headed up to try and climb the Gross Grunhorn via the Grunegghorn. Unfortunately I discovered the hard way that I can’t go from sea level to 4000m without acclimatising first and we had to make a hasty retreat before the summit of the Grunegghorn due my inability to stand up.

The next day Becky and I came up with an unusual way of climbing the normally short climb on the the Mönch. Instead of getting the train up, or staying at the hut at the base of the route, we walked all the way up to the Jungfraujoch from the Konkordia hut, which took about 5 hours and involved a pretty involved glacier crossing. Here we met up with Dave before setting off on the route up the Mönch at 11am.

Due to all of us being fairly tired, and bad weather forecast to turn up at some point the next afternoon we decided to have a lie in and get the train down after breakfast rather than attempting the Jüngfrau.

We then spent the next few days hiding from the rain in Grindelwald before Dave headed home while Becky & I went in search of better weather. 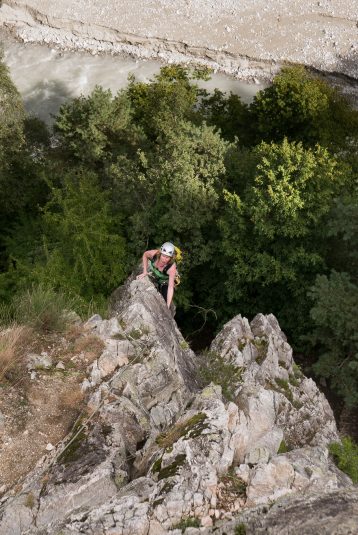 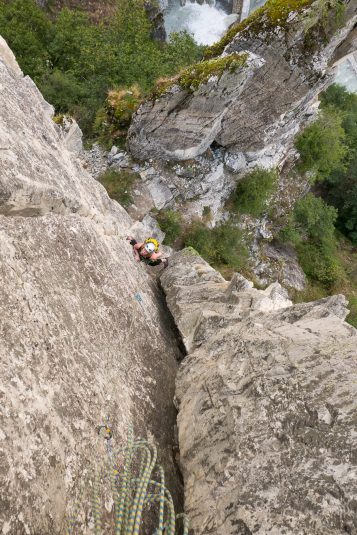 Entertaining climbing up a corner

We had moved from the Bernese Oberland back to the Rhône valley in the hope of a weather window later in the week, thankfully we had an unexpected weather window one afternoon when the rain stopped and the sun came out.

We made the most of this by heading to Bramois which is next to Sion and climbed a brilliant five pitch bolted route. It had some excellent exposure and a rather sporting crux thanks to some interesting bolting. 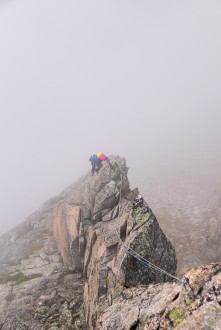 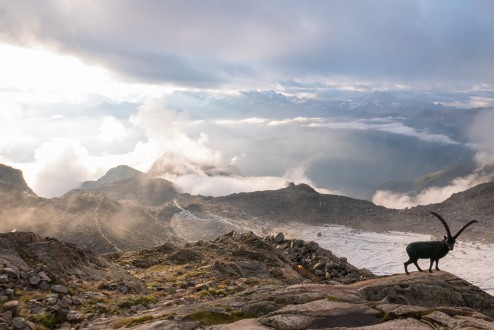 With a two day weather window we decided to head up to the Rock climbing mecca above the Aiguille d’Orny, unfortunately the weather didn’t play ball and we were in the cloud and wind the entire time which meant that we didn’t finish a route on either day as climbing in 3 degrees, in the cloud and the wind was rather miserable.

Great Positions on the Hüttengrat We decided to walk in early with the plan of warming up on a long 4c ridge above the hut called the Huttengrat. The walk in was very steep and we climbed over 900m in about 2km which was a bit of a shock in the morning. Yet again we seemed to find ourselves climbing in the cloud, but there were occasional breaks which enabled us to appreciate the stunning scenery. We even had a view from the top of the climb! 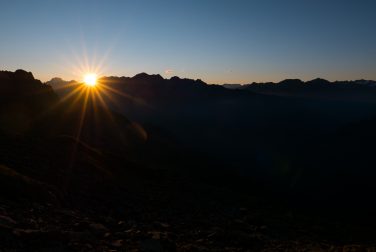 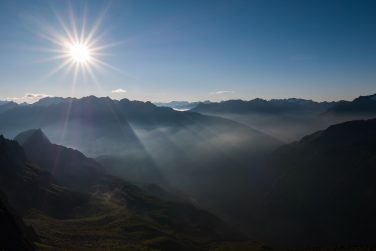 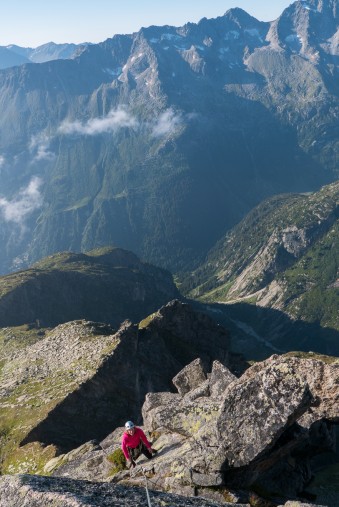 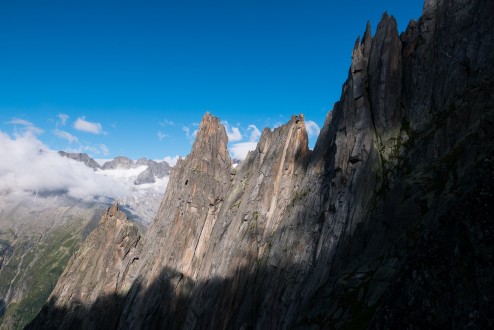 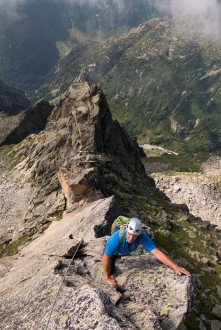 Another team on the Sudgrat 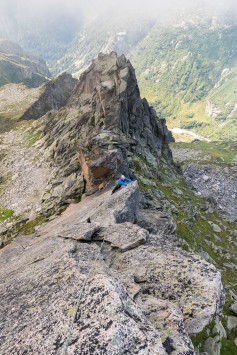 Great positions on the Sudgrat 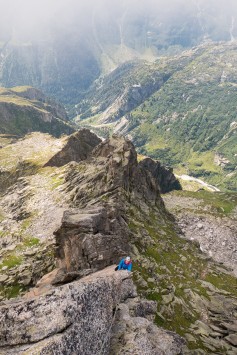 Great exposure on the Sudgrat On top of the Gipfelnadel 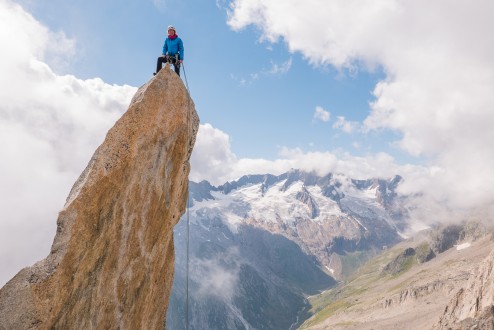 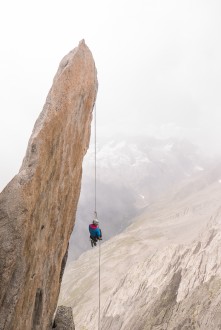 Exposed abseil off the Gipfelnadel 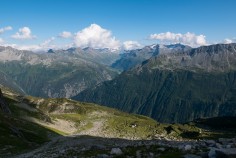 Stunning evening light on the descent 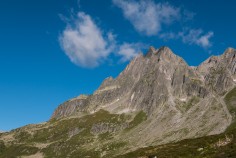 The Salbit in the morning light

After an excellent meal in the lovely Salbit hut we went to bed looking forward to our big objective for the next day. The classic 16 pitch south ridge of the Salbit. The weather was stunning while we walked in and the sunrise was just spectacular, unfortunately given the week of rain which preceded there was still a lot of moisture in the valley which meant that the cloud built up. We could see views in one direction most of the day and the occasional sun just about kept us warm. The climbing was truly fantastic, and very sustained (far more so than the topo suggests).

Eventually we arrived at the summit of the Südgrat, but still had one obstacle to content with, the exceedingly exposed summit needle. The route up the needle involved stepping out above its south face and enjoying a brilliant layback all the way up the arête, there aren’t many better ways of finishing a massive mountain route!

Expecting to be late for dinner we set off on the descent, which seemed to take ages, we were pleased to arrived at the hut a minute before dinner was meant to be served, suitably tired.

We considered climbing the next day, which turned out to be glorious, but we were both reasonably tired so decided to have a leisurely start and head down to find somewhere in the valley to camp before taking two days to head back.

After the Salbit we headed to a campsite near Lucerne, on the lakeside where we enjoyed a relaxing day, evening and morning before starting the journey back to reality (home). On the way back we took up a recommendation from some friends and stayed at Laon, which is a spectacular French town which sits atop what seems like the only hill in northern France. After the previous few days the 290 stairs felt like pretty hard work, although it was worth it for the excellent food and bizarre light show. After an obligatory raid of a supermarket for cheap wine and whisky the next morning we finished our drive home before reluctantly returning to work the next day. 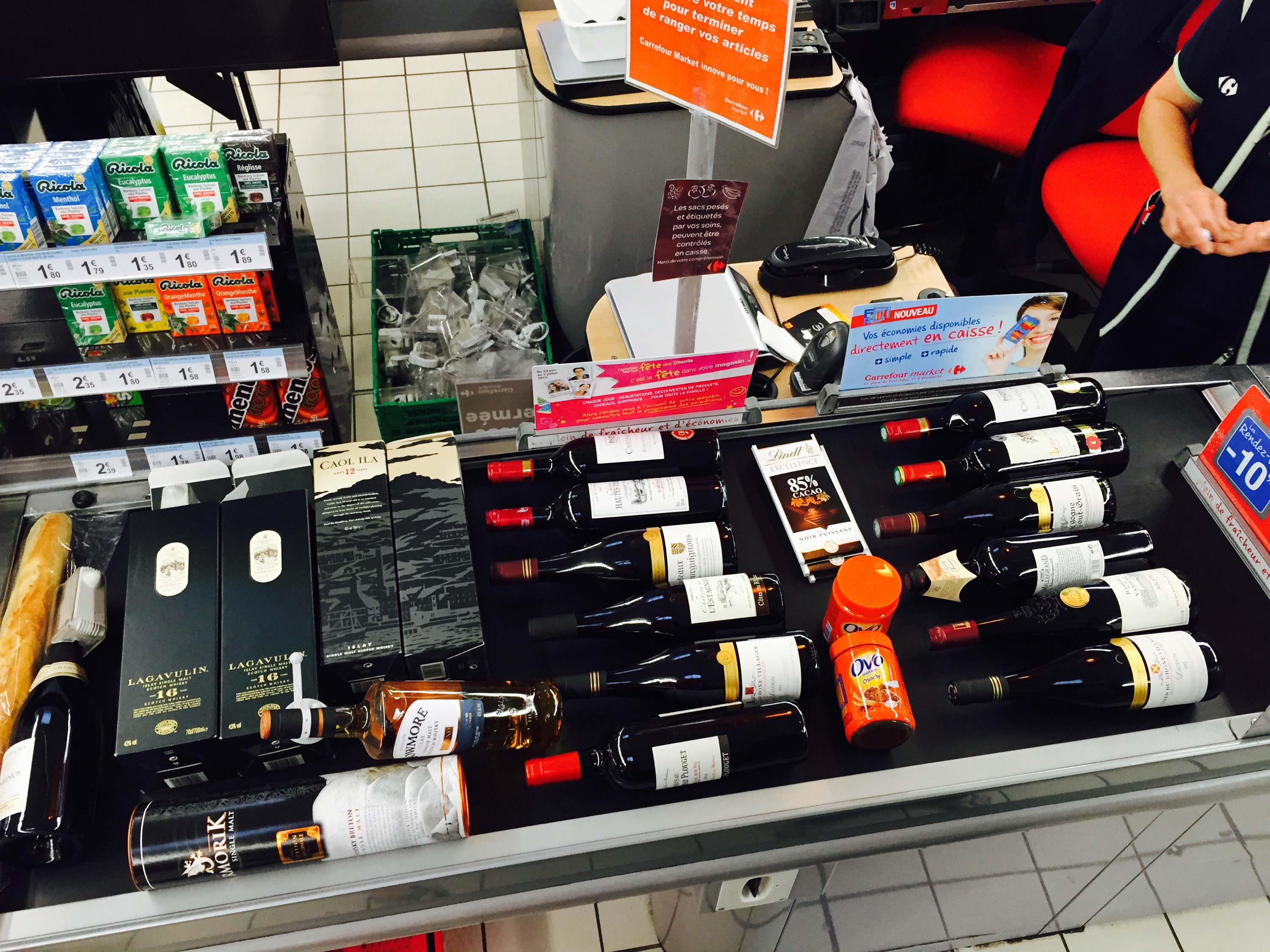