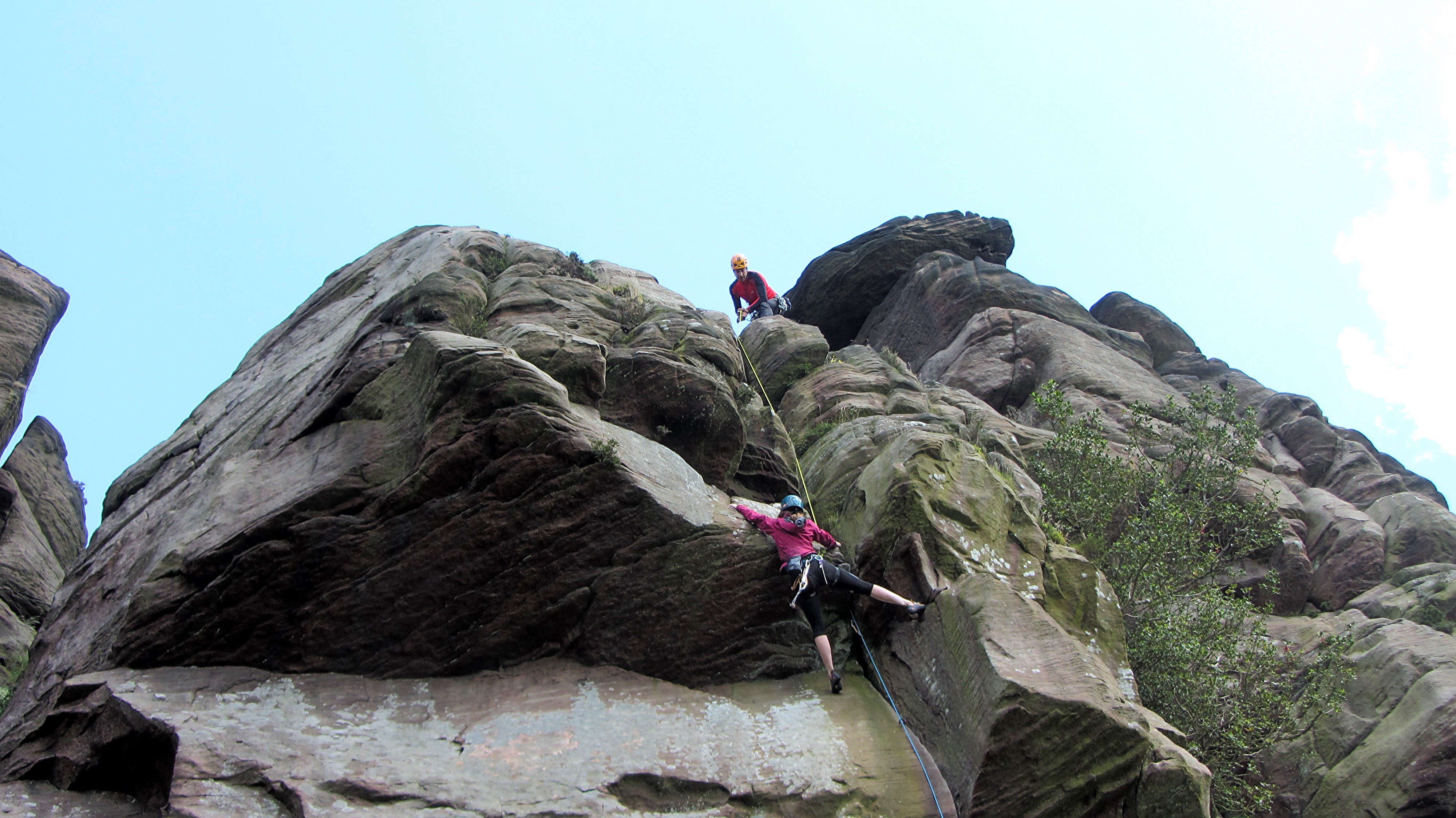 “You a hustler, boy?”  Dan was showing a suspiciously deep knowledge of the rules of pool, about which he only demurred: “I’ve just worked in a lot of pubs.” But when he finally hit the table, he cleaned up. Omar and I, “The Wind-gatherers,” had been blazing the baize since the first round of our winner-stays-on tournament in Ye Olde Rock Inn, surviving by a mixture of fluke and other people’s mistakes, but in “The Chimney Perverts” we’d met our match.  Perhaps Dan’s “working” in pubs was only a partial truth.

The trip to the Roaches was showing up a variety of members’ shadier skills. The key code for the hut didn’t work, so Dave and Emma spent their first couple of hours on Friday breaking and entering, largely at the warden’s behest. The rest of the gang staggered up the path under the weight of their supplies while the early birds nabbed a few routes. Dan and Dave released their frustration after the breaking and entering, while David had just arrived from Spain and shot out for a quick tick with Neil and Sorcha as twilight fell.  This was a compact meet, only ten of us, which was just about right; the Whillans Hut claims to sleep twelve, but doesn’t mention that it only does that if four of them are less than 150 cm tall. The large dorm thinned out even more at 3am when Omar retired to the common room floor, escaping some weapons-grade snoring.

Saturday dawned fine and the crew awoke to more droning, this time Dave’s quadcopter hovering above the lower tier, taking Bald Eagle’s productions literally to a new level.  After the usual vacillation, most people paired up and scattered, leaving poor Emma to guard the hut all morning, waiting for the warden to come and fix the lock.  The number of unwanted nosy visitors, toilet-seekers and searchers-after-refreshment that she turned away must have taken some resilience and the tone of a night-club bouncer.  (When I found a couple wandering through the hut on Saturday afternoon asking if they could get tea and coffee here, I should of course have asked them how much money they had, but you never think straight at the time).

Most teams headed for the Roaches, of course, and hit the classics from the get-go. Black and Tans, Rotunda Buttress, Sloth, Saul’s Crack, Valkyrie, Jeffcoat’s Chimney, Raven Rock Gully…whoah, back up there, did you say chimney and gully in the same sentence as classics? Of Raven’s Rock Gully, Rockfax says: “The deep and gloomy rift to a tight and scruffy exit” and gives it two stars. I must be missing something, I really must, as I’ve commented in the past, but now you know where the “Chimney Perverts” team name comes from.

Meanwhile, Omar and I took a drive to Windgather Rocks, a mellow little outcrop a shortish drive away, and now you know where that team name comes from, it having nothing to do with underwear. Actually, we mistakenly believed the “road closed” signs on the main road, and took a picturesque but snail’s pace trundle through the back lanes so had a longish drive. We also cursed the Ordnance Survey for missing the crucial fact that the Goyt Valley road is one-way.  But we had chosen the crag for some low-stress ticking and it provided that, eight routes, not very tall but on immaculate rock amid friendly like-minded teams. The only one that was called a chimney just had a  crack near the top that would just about take a shoulder if the positive face holds weren’t enough for you; my kinda chimney.  As we coiled the ropes a fell race came by, a caravan of panting and stumbling sufferers in vests that took 15 minutes to pass, many of them asking to “swap hobbies” if I heard right.  No thanks, we’re good.

Back at the hut, everyone seemed to have had plenty of climbing, the finale being David’s shepherding of Carlos up Valkyrie by a most entertaining babble of Spanish between two people who couldn’t see each other. After sprucing up in the hut’s very swish new bathroom – lovely to look at but devoid of hooks and bog roll – we trooped off to the “Rock” for gargantuan suppers, local craft ale and pool.

Sunday was damp. It wasn’t really tipping it down but the typical wind-blown light drizzle that brings out the Roaches’ greener side. You could go climbing in that, but it wouldn’t pleasant, and after such a successful day there wasn’t much motivation, even among the devotees of dank crevices.  The forecast was for clearance that afternoon so people had a very easy start, and as more tea and coffee came and went, had several conversations like the vultures out of Jungle Book.  “What shall we do?”  “I dunno, what do you wanna do?”  In the end it wasn’t clearing quickly enough, so a couple of groups went out for low-stress walks, while the others headed into Buxton for tea and gear shops.

For the walkers it was a nice surprise, at Roach End, to find an ice-cream van, and an even nicer surprise that despite its clapped-out character, it sold delicious local dairy ice cream rather than mister whippy’s sugary white slime.

An even bigger treat perhaps were the peregrines. I still can’t quite believe that’s what they were, but we did keep seeing two and sometimes three birds of prey, and they flew close over our heads as we finished our walk, not looking like any of the commoner birds of prey I can comfortably recognise. Now I’ve had a look at some pictures on t’internet I’m nearly convinced, and wish I’d made more fuss at the time.  Perhaps next year the quadcopter might flush out some wallabies for the complete wildlife safari. 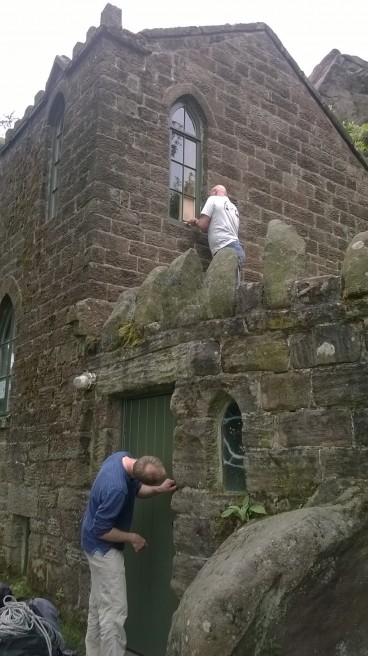 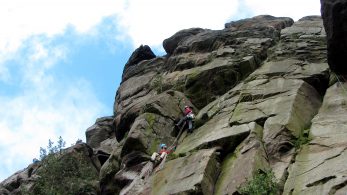 Di and Dan on Balck and Tans 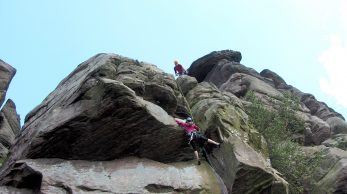 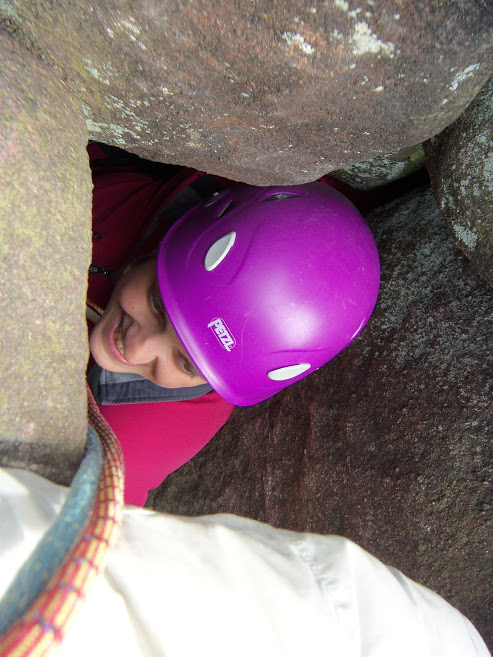