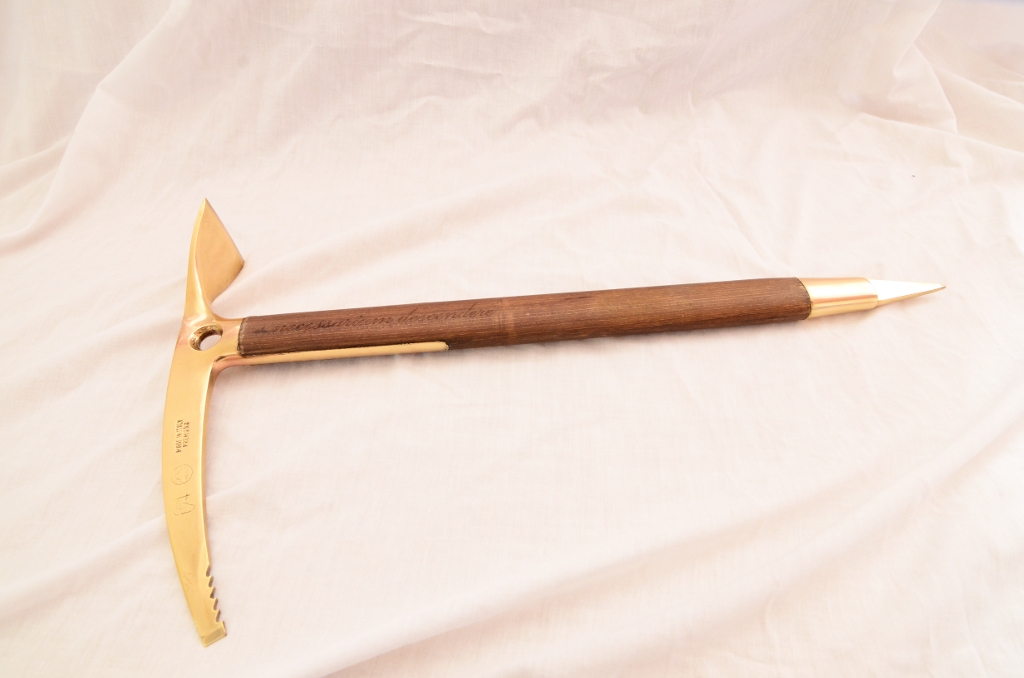 Around the start of September I spotted a wooden axe for sale on ukclimbing. It appeared to be in reasonable condition, and I had wanted one for my wall for a while so I sent off an email.

A few days later a slightly rusty but serviceable “interalp camp” turned up at my office. 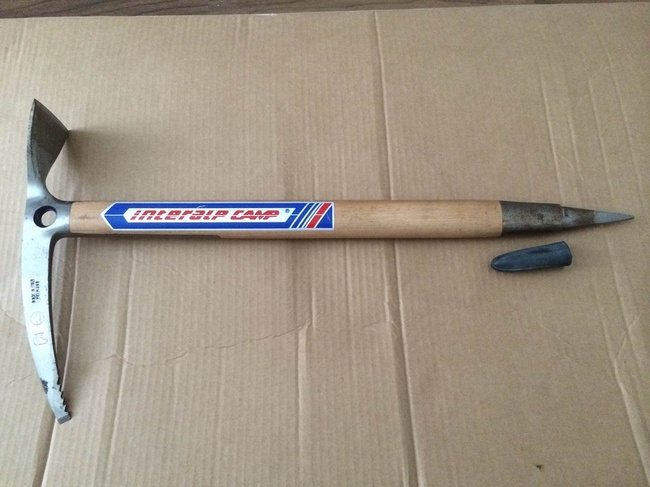 After a bit of thinking about how far to go when cleaning it up it occurred to me that it could potentially make a reasonable trophy for the club awards. I asked the chair what he thought of the idea, and the golden axe project was born.

The first step was to raid the local hardware store and buy loads of wire wool, sand paper, paint stripper etc. Over the space of an hour the old varnish was removed and the worst of the rust beaten into submission. 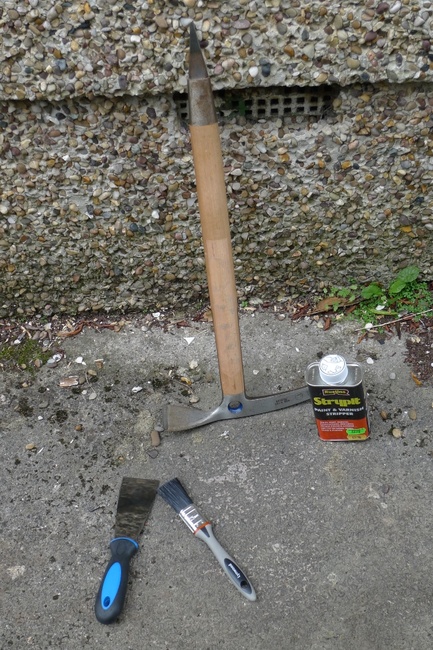 The result was enough to convince me that the idea wasn’t completely stupid, but to go further I had to consult people who knew what they were doing! 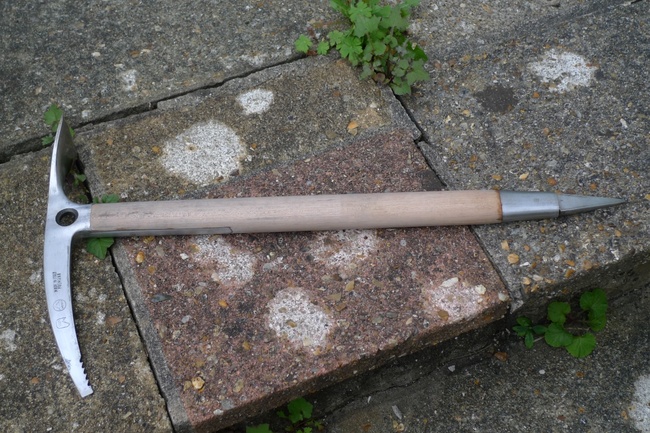 After a bit of searching on the internet and asking for recommendations I contacted Doug Taylor, a metal finishing firm near Weston Super-Mare, and asked about electroplating the metal with brass.

They strongly advised that the head, ferrule and spike should removed from the wood as the process involves prolonged immersion in a chemical bath at around 70C. Unfortunately it turned out that the metal was held on with both rivets and epoxy resin, so doing this without destroying the handle seemed virtually impossible. The next best option was to try to protect the wood somehow.

After reading up on the acidity and temperature resistance of various coatings it seemed that 3 coats of polyurethane should protect the shaft. A few days later it was varnished and posted off with a covering letter stating that I didn’t really mind if the wood was damaged a bit.

I had access to all the tools I needed to make a new handle if necessary so I decided to chance it. The worst case scenario had the club waiting until next year. 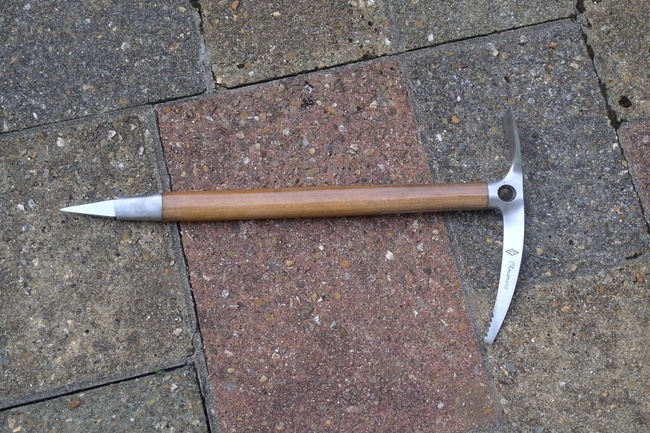 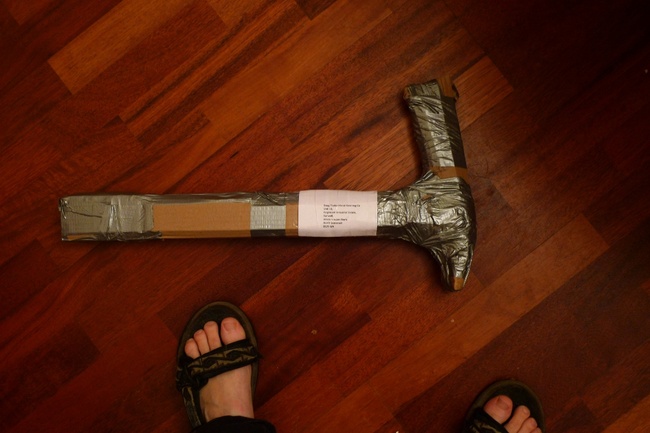 A couple of weeks later a far more competently wrapped axe came back. The quality of the plating was excellent! 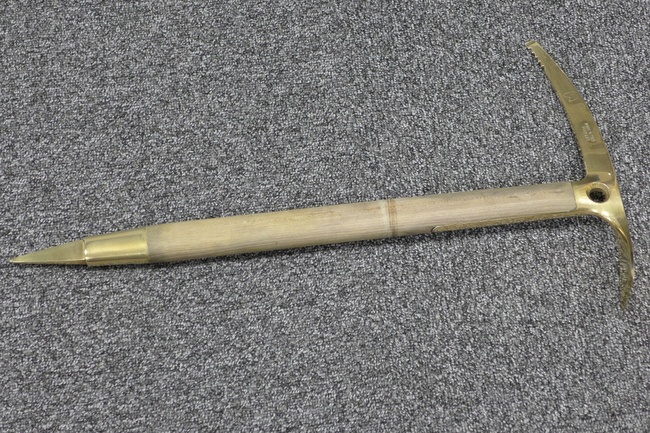 The varnish had mostly dissolved[1], which was initially concerning but 5 minutes with some sand paper showed that the wood had darkened in a manner similar to fumed oak. Fuming is an effect I have always been keen on, but it is usually unachievable with ash. An unexpected bonus! 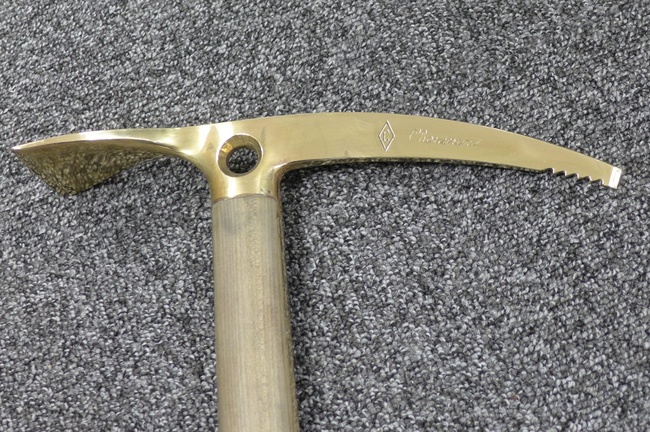 The last time I composed any Latin I was about fourteen. I wasn’t very good at it. Fortunately some people worked harder at school so I hunted some down and pestered them for translations of a number of well known climbing quotes.

The one I finally selected reads “ascendere de voluntate est; necessarium descendere”. Identifying the mountaineer is an exercise for the reader. If you were at the 2014 AGM and know the answer already then you are disqualified!

The original plan was to borrow a pyrography iron and burn the text into the axe handle. As time went on this started to seem quite risky – I have never really done it before and am fairly clumsy when it comes to close work. Ruining things at this stage would not be clever!

I had just about given up on the idea of having text when a friend of mine pointed out that a laser cutter would be ideal, and that Bristol Design Forge was within easy reach of my office. I popped down on a Thursday afternoon for a chat about fonts and layout and was informed that it would be ready by morning.

Unfortunately there was a club trip over the weekend so I didn’t get to see it until the following Monday but I was not disappointed!

All that remained at this point was a tiny bit more sanding, some lacquer to prevent the brass from tarnishing and a couple of coats of linseed oil to bring out the best in the wood. 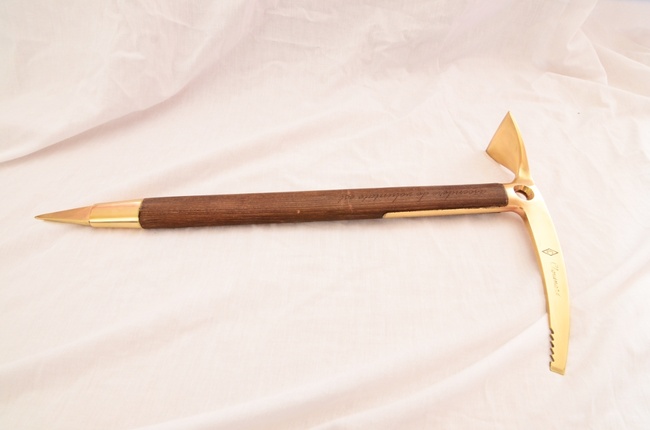 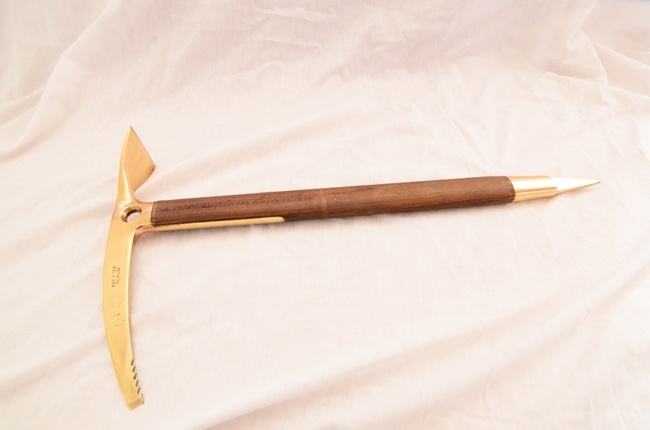 There would be no new golden ice axe without the following people: