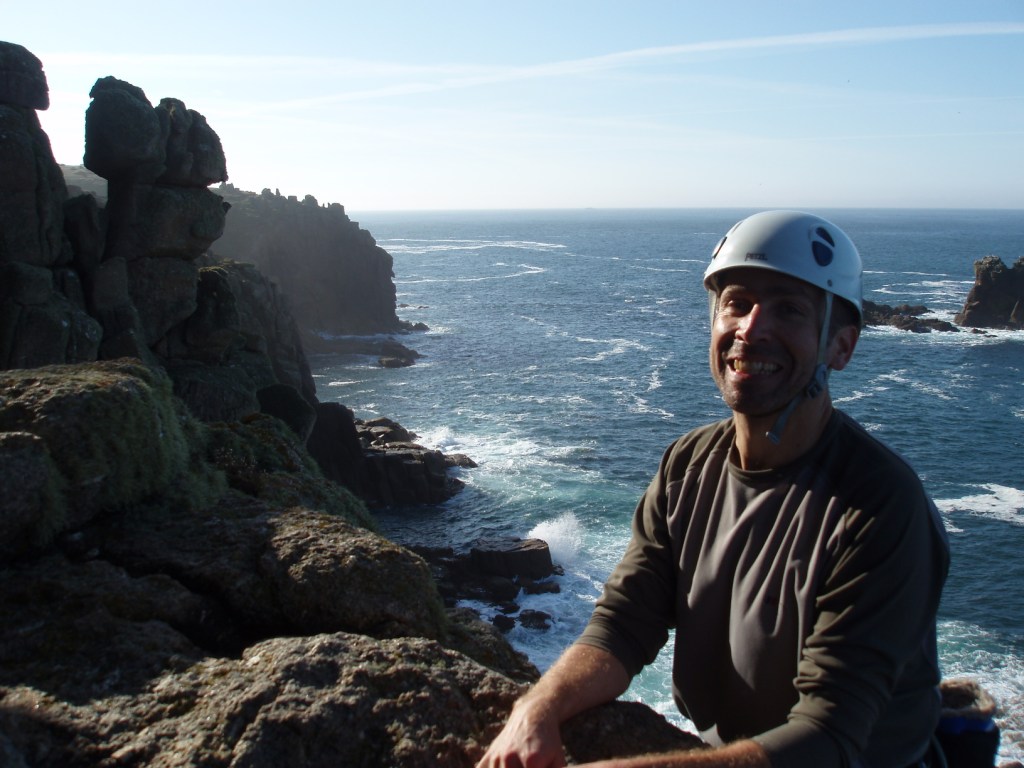 After my finals, my Uni club went to Cornwall for a week. From Newcastle.  What were we thinking? It rained every day. In fact, it rained so much we bailed and stopped in at the Roaches for a day or two, since it was on the way back. It rained some more. Now that I am an old, old man, and the memory of such washouts seems so very distant, it’s hard to believe that was really me at all. You see, I’ve just had three successive sunny AMC meets to both Cornwall and the Roaches, and my few trips to West Penwith in the intervening years have all been under blue skies. I must have done something nice to a weather god somewhere.

Saturday morning at the Count House, then, and the shake-down into teams and destinations was probably being finalised over breakfast, leisurely for those aiming for tide-affected venues, but Nick and I were off quickly to Land’s End (being fathers of young children, our body-clocks are set early.) We were so early that nobody was collecting money at the Land’s End car park, indeed there were only a couple of other cars in it, so we figured we wouldn’t be queuing at belays. I’ve fancied the Long Climb (VD) for some time; topping out under the noses of the tourists on the viewing platform seemed a good jape. And the climbing was great, too, a steeper, shorter sort of Bosigran Ridge.  There are steep cracks and slabs and chimneys and a very hairy top wall. No, I mean literally hairy; coarse grassy moss the depth of your fingers, no obvious gear until you’ve made the hardest move…probably. After a couple of moves I decided it was supposed to be fun and sidled off left. There were tourists but they didn’t seem that interested. 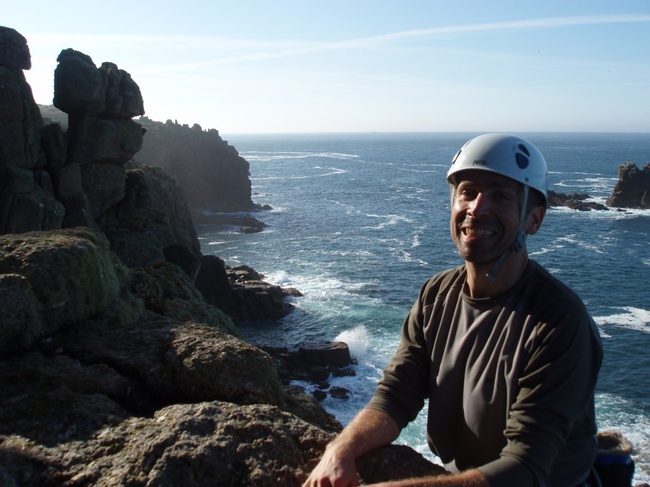 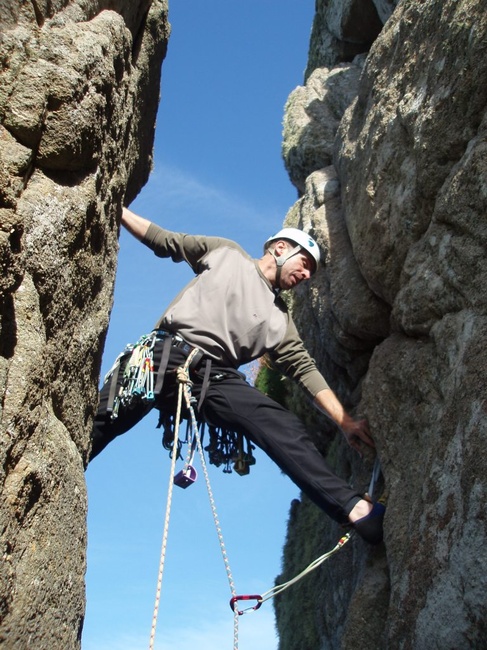 Yoga on the go: Nick attempts the Utthita Trikonasana on the Long Climb

On our return to the hut, No-Beta Nick asked us how we’d enjoyed the key pitch with the long traverse and the step across the chasm. Now, we’d had the guidebook out at pretty much every belay, and finished up in the right place, but for the life of me I couldn’t remember anything so dramatic. Maybe it fell down last winter. Anyway, that was later, because after lunch we walked along a now sun-soaked cliff path to the adjacent headland of Pordennack Point. There’s a subculture in the AMC, possibly because of its Mendip heritage, that revels in the revolting, seeking out slime-filled chasms up (or through, or down) which to slither while still claiming it to be mountaineering. I commend Pordennack Point to them because the approach is through The Squeeze, yet on the other side we were once more onto a sun-kissed “terrace.” 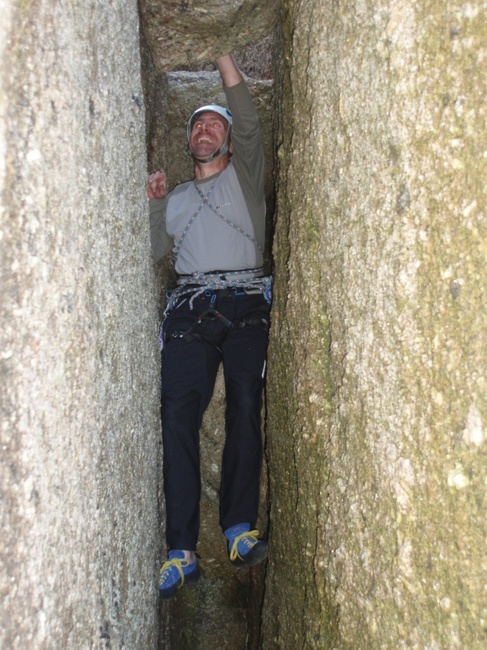 Economist’s Climb (VD) was the target, so named because to find it you need to follow a fabulously complex but beautiful mathematical formula which ultimately gets you to the wrong place. Anyway, its first pitch has some kind of reputation for seriousness, climbing a slightly shattered aplite dyke. In fact there was plenty of gear and pleasant, amenable slabby climbing right until the final, most awkward moves. From the terrace it’s a bit steeper up a crack via an “obvious red wall”, which Nick skirted on the left because it doesn’t matter how obviously red something is to someone with colour blindness. A rightward-trending set of corners and a pull up another steep crack saw us to the top. With time to spare I took a fishing rod down to a lonely cove, but a crashing 2m swell halted my quest for a tasty pollack before it even started. 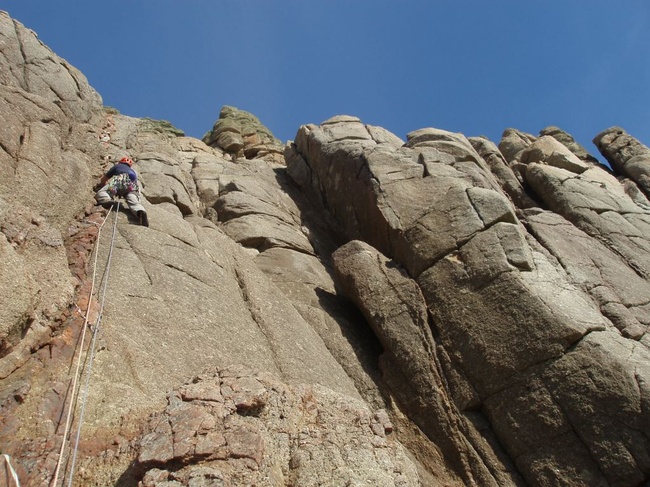 That night we had the Count House to ourselves, which is surely odd. Maybe they’d heard the AMC were coming. Last year there some complaints about the noise because there were CC members in the hut, but it turned out the CC members were making all the noise. Tales were swapped of the day’s derring-dos, but I wasn’t making notes I’m afraid. As I write this I remember, thirty years on, that the Newcastle UMC did take notes; a hardback A4 book was taken to meets to write up the log in the evenings. But we didn’t have one so I only recall Mark and Andy had a terrifically enjoyable top pitch of Right Angle (kept off the base by big seas), and Alastair and Rich had a stretching time on Bow Wall. Diane had lost a few acres of skin falling out of Demo Route, and was feeling a bit battered, but she’d been expertly patched up by the local Baywatch chap so it wasn’t all bad.

Sunday at Bosigran continued the theme; a sunny weekend in September and besides AMC there were two other teams. Perhaps it’s been such a great summer people aren’t so desperate to get out. The weather was fine but the sea was frisky, and it was only just past a high spring tide, so the waves were breaking a long way up Commando Ridge’s first pitch. Nevertheless we did watch, a bit concerned, as a couple of numpties scurried back and forth on the wave-cut platform, waiting for their moment to get past and on the route. They got away with it, in the end.

We didn’t save the best ‘til last, so I’ll mention things out of order. Andrew (HVD) was our final route, about which I’ll just say I can see why they bumped the grade up. There are some nice slabby sections low down, but the hard chimney crack is quite thuggish for most people (graceful ascents are doubtless possible) and I wouldn’t want to take the ride onto those leg-snapping ledges below. Nick gave it a heave and it was in the bag.

Before that we did Doorpost (HS), which you don’t need me to describe. I have to say that on that day it was one of a very few truly four-star routes I’ve done.  I’m gritstone-bred and would always say I’m happier on the upland crags than the sea cliffs, but as I followed the top pitch I did have a little moment. Perfect sun-kissed granite, flowing moves (perhaps too easy by that point as someone has said), the blue Atlantic crashing at the cliff two hundred feet below, adding atmosphere but no inconvenience.  I did slow down to take it all in and think: “It doesn’t get any better than this.” 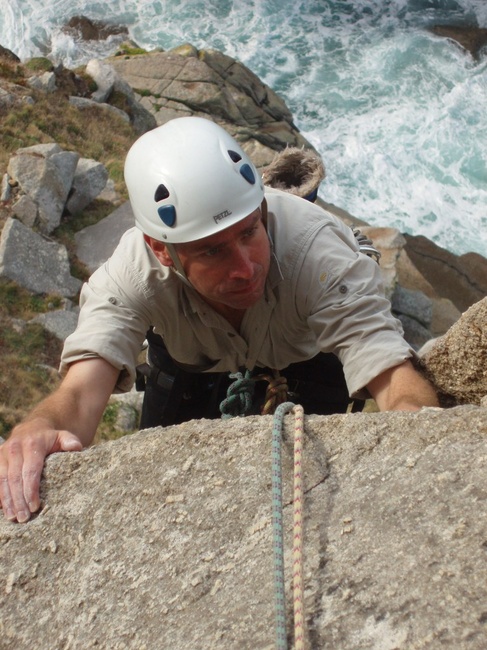 Heaving onto the second stance, Doorpost 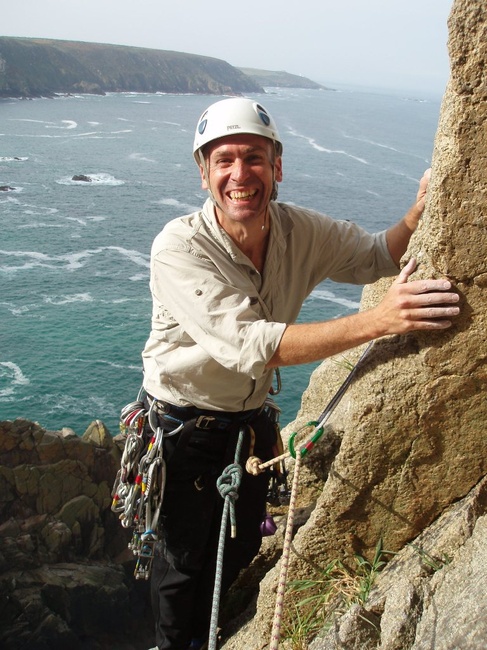 Today we put the heating on for the first time in response to the first frost, so I can use the standard climbing writer’s device of ending a piece by reflecting on, or anticipating, one season from the viewpoint of another. I may have used up my credit with the Bucca Dhu* by next year, and be sitting in a pastie shop watching the greyness, but if not I would be more than happy to lead the alternate pitches on Doorpost next time I’m down. (*Cornish god/spirit, makes storms, try to keep up.) If not, there’s still plenty to go at, and maybe the fishies will be co-operative this time and it won’t just be Di feeling battered.