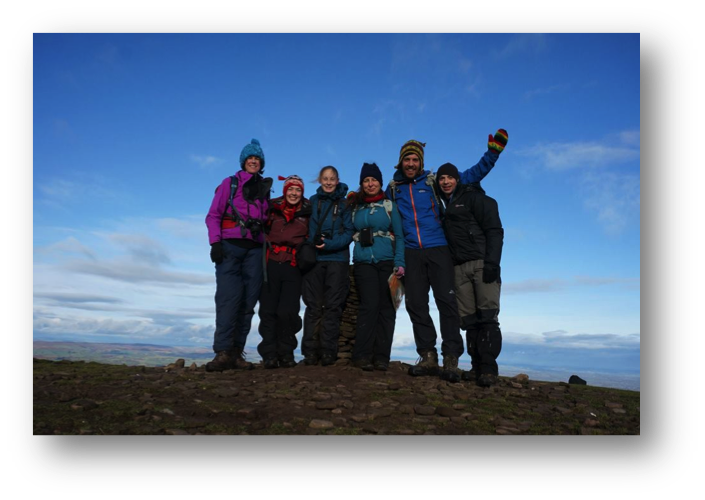 As organiser of our AMC festive trip, I here begin the report:
(Although, in fairness to Chris, he was really the person who found the bunk house and therefore pretty much organised it anyway. I guess I did the silly part of festive fun.)

So, without further ado…
The trip really begins at Temple Meads station where three fellow hikers were picked up by a little white Renault 5, 15 mins late, in true Helen style. Poor Phil had to endure his head hitting the roof for the entire journey – Annabel went in the back on our return journey to England! Upon arrival, we pulled up in the car park at Llanthony Priory, as you do, and walked towards the beckoning light ahead. How funny would it be if it were actually the loos… Oh, right, yep, they’re the loos, nothing to do with a barn. Right, take two. Find barn, enter and make ready for rest of the crew.

Bunk House arrival:
Everyone’s arrived and the barn is ablaze with heat from the lovely wood burner and buzzing with people’s welcomes and general business. The Bunk House was well equipped and spacious although a little lacking in comfy chairs!
Sharon and Dave were most organised in actually planning their routes. We began Friday evening with two teams: Sharon’s team for 25/28km? or Dave’s for 40km. Some people were left undecided.

Saturday:
Team Sharon (Sharon, Annabel, Omar, Phil T, Christine and Helen) and Team Dave (Dave, Rich, Phil O) await for departure and set off about 8:15. Weather was pretty blustery at the top of the ridge but thankfully the clouds cleared and Omar and Christine had a second attempts at catching those Ravens on camera.
Dave, Phil O and Rich head out for a bit of a stroll. They went up and down, up and down and up some more. As team “Let’s walk the whole of the Black Mountains in one go” (catchy eh?) reached the top of Waun Fach, having done around 30km, a decision point was reached. Dave and Rich sensibly decided to head easterly and start to head for the priory. Phil however, and true to form, elected to go north for another 14km in another attempt to prove how much he detests either boot material or his feet.

We met Nick, Jacqui and Sparky, Isabelle and Kate along the way but they gallivanted off ahead, over to Hey Bluff before heading back.
Chris explored the southern side but made the trip more interesting by setting the challenge of how to retrieve walking poles having thrown them over a cliff edge!

Mince Pie Bake off!
Having slaved over their mincemeat for the last month, Phil and Annabel left it at home… still after scrounging, we had 5 contenders. Nick even made a special box to put his in – amazing! Annabel made delicious pastry and used Helen’s mincemeat (joint effort), Phil T’s girlfriend made blueberry muffins.. ummm, Jacqui made mince pies, Sharon made apple tarts… there were also some bakewells courtesy of Mr Kipling. Needless to say, we each tried ALL of them and were pretty pied out. Phil T’s girlfriend won the bakeoff with her muffins.

Phil O made a HUGE mince pie for afters so tipsy people came back from the pub and demolished that too! What a festive evening. Oh – and snow theme was fabulously demonstrated by Annabel in her onesy and mulled wine was on course on tap all evening. Rich didn’t want any of it and was promoted as Bar Humbug of the evening ☺

Sunday:
A much later get up with more of a gentle walk ahead. Less decision as to where exactly to go. We may have tried an adventurous walk and ended up going along the Offa’s Dyke walk to Hay-en-Wye and then rewarding ourselves with cake… I believe Omar went to find a coffee shop in Taunton and everyone else did something a little shorted. Nick went to grab a couple of Marilyns. Shout to all walkers – this is something to look into!
So all in all, a successful trip. Thanks guys for joining in the fun and merriment! 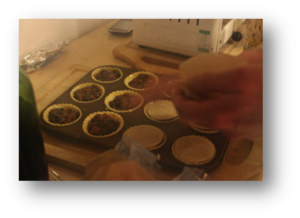 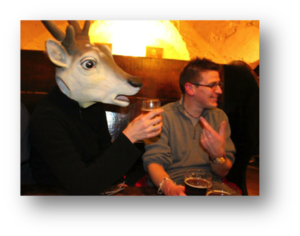 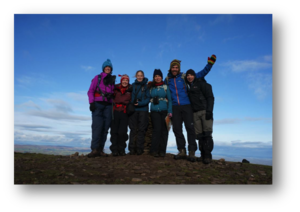