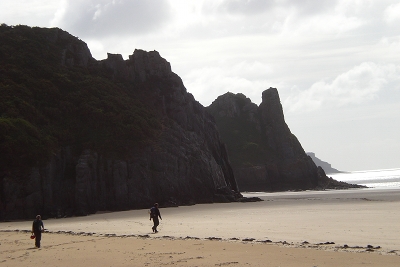 The Gower coast was looking its May best for the weekend trip organised by Sharon Chirrop. 18 or so happy climbers met up at the excellent Nicholaston Farm campsite on Friday night with a promising  forecast for the following two days. Saturday saw a scattering of climbers over the area. While one group clambered up the one of the few multi pitches in the area (East Ridge at 3 Tors), we chose to go to Paviland and were less than impressed by a route featuring a dead bird belay and moving hand and foot holds.  We quickly decided that Boiler Slabs were a better bet – which they were. Shame about the polish though … and a northerly wind strong enough to allow me to see horizontal rope technique for the first time. 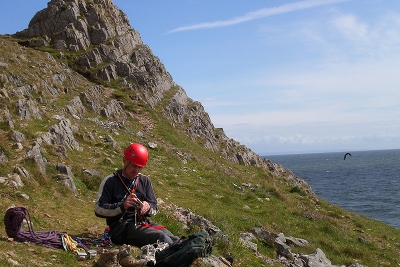 The wind abated enough in the evening to let it rain – just about the same time as the BBQ was lit. This naturally didn’t deter anyone – except a few who chose the dry alternative and retreated to the pub.

Next day was again sunny and the wind scattered the groups to different places (or rather, there was a swop of venues) to experience the choss and polish.  A few confused souls were unable to navigate their way to their chosen crag but happily found suitable alternatives.

Rob H and I had a prolonged struggle with the useless guide book  but eventually managed to decipher  it to find plenty of sheltered and starred routes in the 3 Tors area .

Once again the Gower proved a great playground.