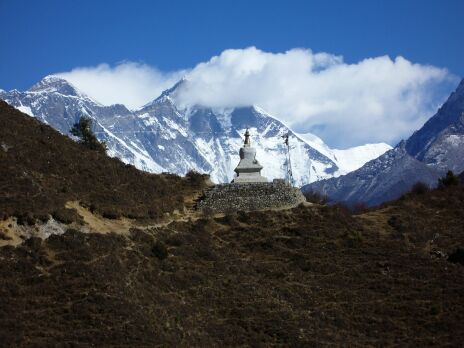 ‘Good morning! Tea, coffee?’ I wrestle with the draw strings to get out of my sleeping bag. ‘What do you want?’ I enquire to the cocoon beside me the only response is a grunt which I decide must mean hot chocolate. Our Sherpa dishes out our beverage and I lay back down and try and figure out if I’d recovered from the previous 24 hours of feeling completely wasted with a little man running around my head using a rather large hammer & drill. All seems well so as quickly as possible out of the sleeping bag I throw some clothes on shivering as the cold material hits my skin.

The cocoon next to me stirs a bit as I stuff my gear into my kit bag ready to be loaded onto our yaks.

A muffled yes emitted from the pile of down. I wasn’t that surprised by the lack of enthusiasm, the occupant had spent half the night throwing up I’d lost count and sympathy after about the third time. I had however been impressed and some what relieved with his expertise at escaping his sleeping bag and getting his head out of the tent in time. With night time air temperature down to -15c and ground temperature where water freezes on impact even in a good bag however ill you feel every draw cord and zip is done up leaving the smallest hole possible to breath through. 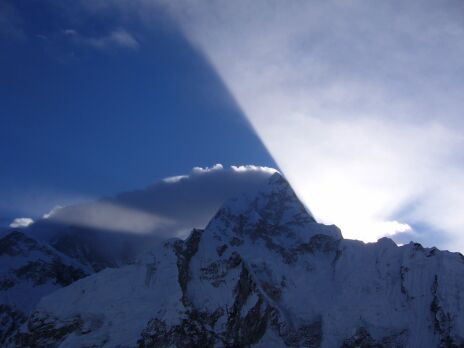 Grabbing my tea I head out to greet the day and as with most mornings survey the surrounding mountains. We are camped at the edge of settlement of Lobuche (4930m) surrounded by mountains ranging in height from 5245m up to 7864m. If the cold and lack of oxygen doesn’t take your breath away then the scenery most certainly will.  Today I was hopefully going to forefill an ambition started back in primary school while watching a film about the ascent of Everest. More than the ascent I remembered that it had take the team 10 or so days to reach Everest base camp on foot at that age it had never occurred to me that anywhere could be that remote.

Anyway enough reminiscing more important things need to be dealt with, a trip to the toilet tent first thing meant the contents from the previous evening would be still frozen and hence less fragrant.  Next stop breakfast including the ritual of defreezing water bottle and camel back with boiling water before heading up the trail. Quarter of an hour later go to take a drink from camel back but it’s already frozen. I take the tube and stick it down the back of my T-shirt this seems to be a fairly reliable if a little refreshing way of defrosting the tube.

We pass a shrine to some Japanese climbers who died on Everest I take a moment to read the inscription. The last couple of days we have passed many such memorials to climbers. Tthe previous day on the way up from settlement of Dughla we had passed through the main memorial area known as Chukpilhara where amongst memorials to other climbers and Sherpas is the memorial to Scott Fischer who for many who have read ‘Into Thin Air’ this will probably be the most memorable death on Everest. Having read the book a couple of times and even though I was feeling like seven shades of the brown stuff at the time it was a very thought provoking moment. Almost as moving is the memorial at the medical centre in Dughla its not so much the list of all the people who have died that gets you thinking its more the way they have removable panels so they can easily add the names of those who are going to die probably having looked at this monument on the way up. 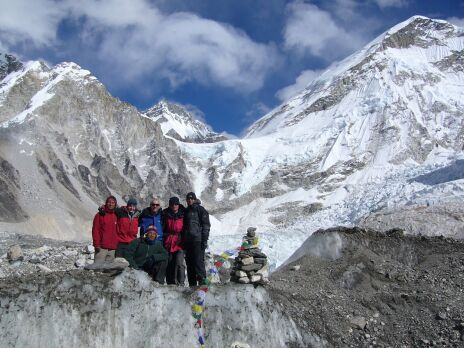 The cold water now dripping down my back means the tube is defrosted, I take a quick sip only the end of it is defrosted I’m just about to stick it back into my T-shirt when the sun appears over the mountains and the temperature instantly rises and slowly things defrost. ln a matter of minutes you can go from being just warm enough in a down jacket to walking in a T-shirt.

The path steepens and eventually we are above the Khumbu glacier. In the distance we see for the first time where base camp is. Arriving at Gorak Shep (5170m) where we will camp tonight a break is called for. Some lemon tea and a short rest before the final 6 hour return walk to base camp. We have ourÂ  drinks sitting next to a large stack of crevasse ladders used every year in the Khumbu ice flow on the way up to camp 1.

Two of my fellow travellers are suffering big time with similar light headiness and bad headaches I’d had the day before and decide to give base camp a miss in the hope of being fit enough for the ascent of Kala Patar the next day.  Heading out up the side of the glacier the path splits and just in case there’s any doubt of our navigation a sign shows ‘Way to MT Everest BC’. The wind picks up and blows up the side of the glacier chilling the already cold air. Lunch is had sheltered behind rocks and the game of trying to take a clear photo of Everest as clouds pass over its face is played out.

We had seen the top of Everest on various occasions over the last 10 days. The first time had been on the day we had left Namche Bazaar (3440m) the administrative centre of the area. The town is set in a horse shoe valley and consists mainly of lodges, shops and a Tibetan market. We had spent a couple of nights there to aclimatise which included an walk to Thamo from where you can see the village where Tenzing Norgay lived. Did you know he was actually a Tibetan and not a Sherpa?

Until now the best view however had been from Gokyo Peak (5483m). We’d camped at Gokyo (4750m) beside the lake and it had been a 4.00am start, the mercury was huddled off the scale of the thermometer trying to keep itself warm as we headed out. The trek to the summit had started OK but after about 300m of ascent the thiness off the air start to take effect and by the summit the lack of my body’s acclimatisation became apparent. The feeling was a bit like having a few too many drinks. Walking over the boulders required real concentration and I remember having to really think how to do up my pack’s belt which I have probably done 100 times without much thought. The view over to Everest, Lhotse in the far distance with the Gokyo lakes and Ngozumba Glacier in the fore ground not to mention all the other peaks over 6000m was definitely worth the discomfort. After the usual photos and pause to take everything in a quick descent was made to Gokyo where everyone including one of the Sherpas collapsed into a tea house. Everyone was completely shattered with severe headaches which were to last most of the day all the way down to our next camp at Na La (4100m). 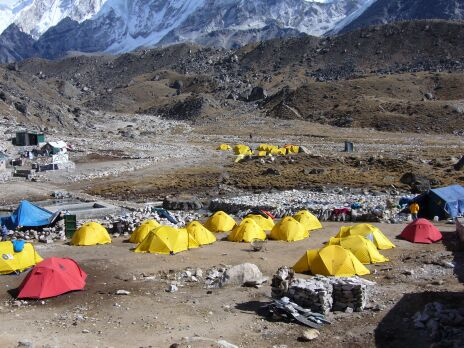 At Na La we camped in the grounds of a climbing Sherpa’s tea house. He had just come back from an American expedition to Lhotse (8516m) and amongst other achievements had summitted Everest 7 times setting ropes for commercial expeditions. In the west he’d be a hero on the lecture circuits. Here he ran his rather run down tea house with wife and baby and some amazing photos, feeding the stove with yak dung to keep us warm.

Heading towards base camp the path drops down and along the edge of glacier. To one side is a steep slope which is lose shale with larger rocks towards the top. This is all very unstable with rocks bouncing down at irregular intervals. At Gorak Shep we had been told that a Sherpa had been hit by one of these rocks and had had his arm broken the previous week. Needless to say with eyes peeled we kept moving until we could get onto the glacier and made our way to a couple of cairns draped with prayer flags. So this was base camp, almost the end for us and the start of the dream for climbers. Apart from the cairns it’s just a glacier, over the last few years a lot of work has been done to clear it up and the wreckage of the 2 crashed helicopters had been air lifted out the previous year, but that doesn’t take anything away from the experience of being there. In the main climbing season tents spread for a mile down the glacier with everything from a hospital to a market.

The return to Gorak Shep was broken by one of our Sherpas bringing up a flask of hot lemon which was gratefully consumed. As usual everyone was cocooned inside tents by 20.00 after some food and a few hands of cards.

‘Good morning! Tea, coffee?’ Looking at my watch its 3.50 the day after visiting base camp, tea quickly consumed backpacks are hoisted onto backs and we head up to Kala Patal (5545m) in the dark. Five days have passed since the ascent of Gokyo Peak and my body is much better acclimatised and can cope with the thin air, as we climb the sun comes up and paints Everest and the surrounding mountains orange. The summit reached, photos taken, its down hill all the way back to the airport at Lukla (2886m) four days walk away. The runway has a mountain at one end, a cliff at the other and slopes at about 20 degrees. Landing when all you can see between the pilots ahead is mountain requires a bit of faith in their abilities. Fortunately even though for our internal flights we were flying Yeti Airlines our pilots seemed human enough or at least well groomed….